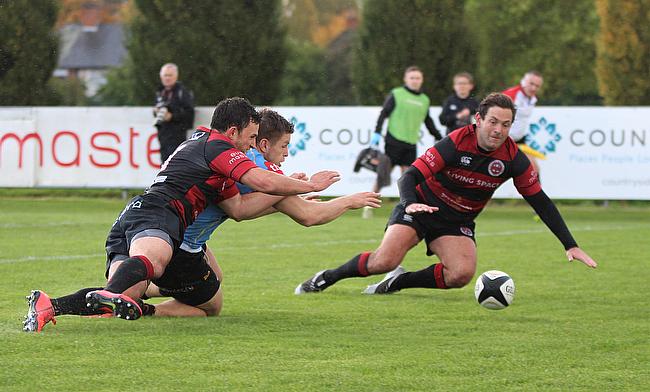 Round Seven in National One contained some eye-catching results as some of the leading sides fell to defeats. Photo Credit: (Phillipa Hilton)

So as October comes to a close, those clubs who did suffer losses last time out will want to end the month by returning to winning ways.

League leaders Richmond saw a run of six straight victories come to an end last weekend so they will be keen to respond when they travel to Rotherham Titans whilst the game of Round Eight sees Rosslyn Park host Birmingham Moseley.

Like Richmond, second-placed Park were beaten last Saturday but bouncing back won’t be straightforward against a Moseley side who have won four of their last five games. Meanwhile, Rams (3rd) will also be looking for an instant reaction when they visit Bishop’s Stortford.

Fourth-placed Cinderford toppled Richmond in Round Seven so Paul Morris’ side will be out to strengthen their possible promotion push against bottom of the table Hull Ionians this weekend whilst Darlington Mowden Park go to Canterbury aiming to maintain their strong recent run.

Richmond headed into last weekend as the only unbeaten side in the division and with five minutes to go against Cinderford, Steve Hill’s men were on course for a seventh successive victory. However, they were to taste defeat in the cruellest fashion as the Gloucestershire club pulled off a remarkable fightback to snatch a win from Richmond’s grasp.

However, the London-based outfit still remain three points clear at the top of National One as a cluster of teams below them all suffered losses in Round Seven. One of the sides to lose were Chinnor and they did so against Rotherham Titans, who are Richmond’s next opponents. Last weekend’s victory for Martin Jenkinson’s men was full of desire and determination as they moved one point clear of the relegation places so the Yorkshire club will be hoping they can display those attributes once again against the table toppers.

After their first loss of the season against Blackheath in Round Four, Rosslyn Park reeled off convincing back-to-back victories scoring 79 points in the process. However, Kieran Power’s side suffered their second bump in the road last week as they fell to a surprise defeat against Cambridge which denied Park a chance to move to the top of the league standings.

The hosts on Saturday will now be after a reaction and they take on a Birmingham Moseley side who were able to profit from Park’s misfortune in Round Seven. Moseley arrive in the capital off the back of what turned out to be a hard-fought win over Canterbury and another victory this weekend would see Adam Balding’s side leapfrog Park in the table as they look to continue their impressive season thus far.

Both of these sides have had contrasting fortunes in National One this season and they suffered differing results last weekend. Third-placed Rams fell to only their second loss of the campaign as they were beaten by Blackheath whilst Stortford, who hadn’t won since the opening day prior to Round Seven, doubled their tally of victories after defeating Hull Ionians in a thriller.

Rams will now be looking to put last Saturday’s defeat on the road behind them as they sit just four points behind league leaders Richmond. The last time Rams came up against Stortford was back in National Two South in April 2017 and on that occasion, Stortford clinched an enthralling 36-33 victory so Andy Long’s side will be hoping for a similar outcome as they target their first home victory of the campaign.

Cinderford are on a three-game winning run on the road and that trio of away victories have involved late drama on every occasion. Last Saturday was no different as with five minutes remaining, Paul Morris’ side somehow pulled off a remarkable fightback to triumph over table toppers Richmond. Round Seven’s win was arguably the Foresters’ best result of the season, but they will be craving a victory at home this weekend.

The Gloucestershire outfit haven’t won at Dockham Road for over a month and all the signs point to a Cinderford win as they prepare to host bottom of the table Hull Ionians. However, the visitors will arrive in the West Country in better spirits as they produced a much-improved display against Bishop’s Stortford last time out to secure their first two points of the term. The I’s will probably have been frustrated not to have picked up their first victory after leading 26-8 at the start of the second period, but rather than looking at the negatives, Hull Ionians must carry the positives in to this weekend.

Prior to last Saturday, Darlington Mowden Park were still searching for their first win at the Northern Echo Arena, but their wait to open their account at home ended in emphatic fashion as they stormed to a victory over Old Elthamians. Danny Brown’s side are now up to sixth in the table and they only five points off the top as they aim to continue their 100 per cent away record in Round Eight.

They travel to Canterbury this weekend with the hosts still searching for their first win of the season. The City Men were outplayed for a large portion of last weekend’s fixture against Birmingham Moseley, but Andy Pratt’s side showed a lot of character to earn a losing bonus-point and it is that grit and determination that could help them end their winless run. Canterbury are already 13 points adrift of safety so a victory at the Marine Travel Ground would be the ideal way to conclude October.

Two old foes renew acquaintances this weekend when Old Elthamians and Chinnor meet at College Meadow and both sides will be keen to response from disappointments. Chinnor were unable to break down a valiant Rotherham Titans defence as they fell to a home defeat in Round Seven but they are only six points behind table toppers Richmond heading into this fixture.

??? “We’re not resting on our laurels and that’s the most important thing.”

Last season, Chinnor failed to beat OEs – with their last victory over the Mottingham club coming in March 2017 – but they will be hoping to capitalise on the hosts’ recent loss to Darlington Mowden Park. Gavin Lach’s side would have been hugely frustrated as their three-match winning streak came to an end, but they have a chance to immediately respond in front of their own fans.

Blackheath’s heavy defeat to Sale FC two weeks ago would have been massively disappointing for James Shanahan’s side, but they reacted in an excellent manner in Round Seven with a battling win over third-placed Rams. ‘Club’ last won on the road at the end of September following an excellent performance against Rosslyn Park and they will be keen to conclude this month in a similar fashion.

However, their task won’t be a straightforward one on Saturday as they visit a Plymouth Albion outfit who have been strong at home this term. After losing at Brickfields on the opening day against Bishop’s Stortford, Albion have put together a three-game winning run on their own patch – which includes last weekend’s victory over Sale FC. Plymouth are one place and one point behind Blackheath coming into this fixture so a positive result would lift them into the top half of the division.

Last season, Cambridge’s visit to Sale FC was a crucial fixture. Richie Williams’ side knew a positive outcome at the CorpAcq Stadium would secure their status in National One and his team delivered. A 24-5 win in Manchester made sure the Blood and Sand would be competing at this level for another year and Cambridge head to Sale on this occasion in positive spirits.

[mpu-1]A superb win over second-placed Rosslyn Park sealed a first victory since the middle of September for Cambridge and now they will be hoping to back that up in the North-West. Sale come into this contest after losing to Plymouth Albion in Round Seven, but they have won their last two matches on their own turf. A hat-trick of home wins could also see Jonathan Keep’s side move out of the bottom three this weekend.