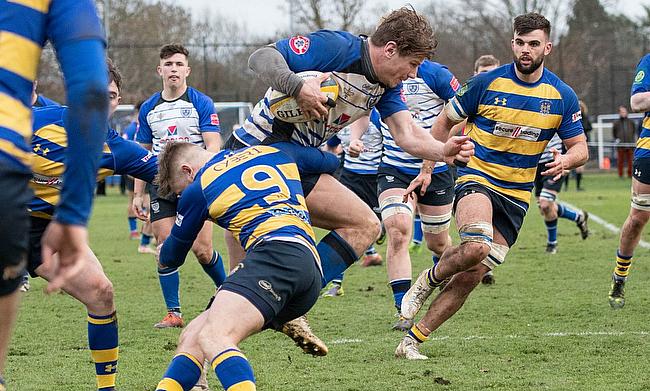 Sale FC and Birmingham Moseley may well have highlighted the importance of their upcoming fixture this weekend as both sides prepare to meet at the CorpAcq Stadium.

As things stand, Sale are five points clear of the relegation places, but a victory in the North-West on Saturday could prove to be a vital result as Jonathan Keep’s side look to remain in National One. For Moseley, they are five points behind Sale in 15th place so victory in Round 23 would significantly boost their chances of escaping the drop zone.

Added to this, rivals Loughborough Students and Esher both play clubs challenging for the league title so Sale and Moseley may have the opportunity to capitalise on the misfortune of others.

Esher host league leaders Old Elthamians with the visitors currently holding a five-point advantage at the summit while Loughborough take on fourth-placed Rosslyn Park, who are in pursuit of OEs.

It could be 15 minutes that defines this National One title race. Considering the twists and turns which we have already had in the promotion battle, it does seem unlikely, but Old Elthamians’ bonus-point win against Chinnor in Round 22 showed exactly why they have been in contention for top spot for as long as they have. A flurry of late tries made sure Gavin Lach’s side maintained their five-point gap at the summit and as we approach the penultimate month of the season, OEs are still in pole position.

???? TRY-LIGHTS ??|
3?? tries in the last 15 minutes gave @ElthamiansRFC a late, and valuable, bonus point victory over @ChinnorRugby on Saturday. #Nat1

Their remarkable journey does seem to be heading in one direction, but looking to derail their title hopes will be Esher. Ricky Nebbett’s side have had a tough month or so and three straight defeats has left them five points shy of safety, having played a game more than their rivals directly above them. Esher’s last victory came at Molesey Road against Caldy and they will be hoping for another home triumph which would not only boost their survival chances, but also have an impact on this gripping title race.

Ampthill and District would have been extremely pleased to pick up maximum points from last weekend’s fixture against Cinderford. The A’s performed superbly for 50 minutes at Dockham Road, but their bonus-point came late on following Tadgh McElroy’s try. The men from Dillingham Park remain five points off the top, but Mark Lavery’s side have a game in hand to come next weekend.

Ampthill will host Caldy to conclude February, but first up, they entertain Bishop’s Stortford. Five weeks ago, we may have said this fixture would be a foregone conclusion with Stortford struggling in the bottom three, but what a turnaround it has been from Andy Long’s side. Five straight wins has propelled them away from danger and up to 10th in the table, with their latest victory over Plymouth Albion being arguably the highlight. Stortford lost 29-10 to Ampthill back in October, but this could be a very different contest in Bedfordshire on Saturday.

The phrase ‘welcome win’ applies to Blackheath and Caldy when they meet at Well Hall this weekend as both sides boosted their spirits in Round 22. ‘Club’ ended a three-match losing streak by securing a hard-fought victory against Birmingham Moseley and James Shanahan’s side may have also sparked their promotion hopes back into life.

Blackheath sit eight points off the summit and they will be searching for their first home win since the beginning of December on Saturday. However, Caldy will arrive in the capital with a bit of renewed confidence after halting a seven-game winless run. The Wirral outfit beat rivals Cambridge last weekend and they are now seven points clear of the drop zone, with a game in hand. The men from Paton Fields haven’t won back to back matches since October and if they were to achieve successive victories on Saturday, it would be a massive step towards securing their position in National One.

A dominant first-half set the platform for Rosslyn Park to beat Sale FC in Round 22. A blitz of tries in the opening 40 was enough to see Kieran Power’s men secure maximum points at the Rock which keeps them in the promotion hunt. Consecutive wins means Park are now nine points behind table toppers Old Elthamians, with a game in hand to come against Birmingham Moseley next week, but next on their agenda, is a visit to Loughborough Students.

A cracking game goes the way of Park who scored four tries in the first half.

Safe trip back to the North West to the Sale side and their supporters pic.twitter.com/8iRVTFdAPl

After flying out of the traps at the beginning of 2019 following a thumping win over Caldy, the Students have found it tough since then. Four defeats in their last five games has left them at the foot of the table and Alan Buzza’s men are now seven points adrift of safety, having played a game more than some of their rivals. Their fate is far from sealed, but Loughborough will be hoping to replicate their recent performance against Rotherham Titans when they host Rosslyn Park on Saturday as they look to upset one of the division’s top clubs once again.

Fifth-placed Rotherham Titans had to show grit and determination to return to winning ways last weekend. They also had Seb Nagle-Taylor to thank. The forward came off the bench to score a hat-trick in Round 22 as the Titans came from behind to beat Esher at Molesey Road. Prior to their success in Surrey, Joe Barker’s side had lost successive matches which seriously dented their promotion hopes and the Yorkshire outfit now sit 17 points off the top with a game in hand.

It seems very unlikely that Rotherham will make an immediate return to the second-tier at the first time of asking, but they will keep battling away. Next up for the Titans, is a trip to a familiar foe in the form of Plymouth Albion. Both sides recently competed alongside each other in the Championship and the hosts will be keen to bounce back this weekend. Kieran Hallett’s men were well beaten by Bishop’s Stortford last time out, but just two defeats from their last nine games is something for Albion to be positive about. The last time the two sides met at Brickfields was over four years ago and Plymouth ran out 22-8 winners. They will be hoping for a similar out come this time around.

Three losses in a row has all but ended Chinnor’s hopes of challenging for promotion. Defeats against Cinderford, Bishop’s Stortford and Old Elthamians leaves Matt Williams’ side 19 points off the top with a game in hand, but for Chinnor, the bigger picture is worth focusing on. After promotion via the National Two Play-Off last May, the Black and Whites have had a brilliant debut season at this level and they will be hoping to end the campaign with a flourish.

Chinnor are back at Kingsey Road this weekend and they welcome a Darlington Mowden Park side who have lost just one of their last five games. Danny Brown’s side have made massive improvements in 2019 and they actually sit just three points behind Chinnor heading into this Saturday’s clash. With recent wins over Old Elthamains and Rosslyn Park, there is no reason why DMP can’t continue their good form in Oxfordshire.

Following a superb January, this month for Cinderford, unfortunately, hasn’t followed suit. Paul Morris’ side have suffered back to back defeats in February, but in their latest loss against Ampthill and District, there were a number of positives. A spirited fightback after the interval from the men from Dockham Road almost completed a remarkable turnaround against the promotion challengers and Cinderford will be keen to repeat that second half performance  when they visit Cambridge this weekend.

As for the hosts, I wouldn’t have been surprised if Cambridge were kicking themselves on Saturday evening. Richie Williams’ side put in a tremendous performance to defeat third-placed Blackheath in Round 21, but last weekend, they suffered a frustrating and narrow defeat against potential rivals Caldy. The Blood and Sand are now seven points clear of the relegation places so there is still work to be done if Cambridge are to confirm their spot in National One for next season. A win at Volac Park this weekend would certainly be a step in the right direction.

Sale FC may have lost to Rosslyn Park last week, but Jonathan Keep’s side never gave up the fight. The Manchester-based side scored a couple of late tries to salvage two bonus-points from their visit to London and they could prove pivotal as Sale look to avoid the drop. As thing stand, they sit five points clear of trouble and with Birmingham Moseley coming to the North-West on Saturday, they have a chance to take a huge stride away from danger.

As things stand, Moseley sit five points from safety so their visit to the CorpAcq Stadium could prove crucial for their own survival hopes. Richard Protherough’s side are winless in four, but their last series of fixtures have come against sides all in the top half. For both Moseley and Sale, this game is vital so who will come out on top in Round 23?