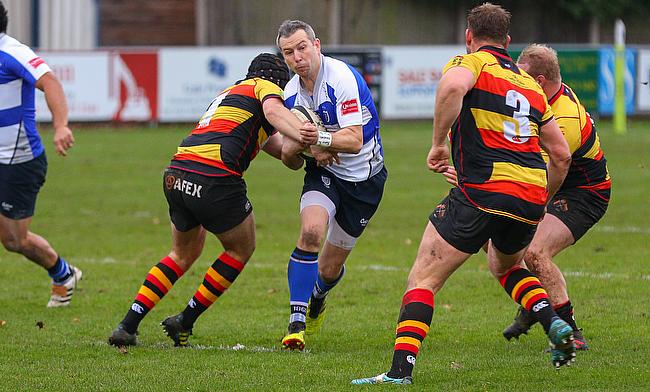 Chris Johnson’s status in the National Leagues is unquestionable – his superb career speaks for itself. Photo Credit: (Gareth Lyons)

At 33, he is one of the most prolific points scorers in both National Two North and National One having represented Huddersfield, Fylde and current club, Sale FC.

The fly-half completed his 14th campaign this year and whilst some may have called time on their playing days, Johnson has more than enough left in the tank.

His recent 2.6 challenge emphasises just that.

During this Covid-19 pandemic, he noticed people were raising money for charity by taking part in various different activities, with cross-code legend Jonathan Davies standing out for Johnson as he endured his own 2.6 challenge.

Initially, Johnson decided to cycle 26 miles a day for seven days on his Peloton for the Children’s Heart Surgery Fund at Leeds General Infirmary (LGI), however, that quickly turned into 10 days before a fortnight became the cut-off point.

“I get goaded very easily by the lads in the WhatsApp group,” Johnson tells ncarugby.com

“I originally put seven days. I didn’t see how many days Jiffy had done, but some of the lads were like: ‘He’s 57 and you’re 33. He’s doing 10 days and you’re only doing seven!’

“Straight away I bit, but they then said 10 days wasn’t enough and that I need to do more because I am 20-odd years younger than Jiffy! We settled on 14, but I wanted loads of money from them!

“I have never even ridden that far on a normal bike. When I went to 14 days, when I got to about six days, I went in a pretty dark place because I knew I should be nearly finished, but I had eight more of these things to do!

“I used to get this fear when I woke up where I’d think I have got that bike ride tonight, but I don’t have that now which is a nice feeling!”

Johnson completed the challenge last Saturday having raised over £1,100 thanks to various donations from teammates as well as work colleagues, friends and family.

Quiz time again and @Johnorugby10 aged 33 is still cycling and raising money for @CHSurgeryFund 26 miles for 14 days on @onepeloton , was shamed into keeping going by @JiffyRugby doing 10 days at 57, great effort by both https://t.co/EI60ZlUvXn… pic.twitter.com/EigmBF2Axi

“At the start, I stuck £50 in from myself because I thought I had to put something in there because I didn’t want it to be zero when I finished the challenge!”

Johnson jokes about how tiring the challenge was, but his overriding feeling is one of pride having raised money for a charity and a hospital which is close to his family’s heart.

“In terms of LGI, my son was born with Hirschsprung disease which is a bowel condition which meant he had to spend some time in LGI and he had a 12-hour operation,” Johnson says.

“We are still going to LGI on a regular basis to keep an eye on him, but it was quite an easy thing to do when I was choosing who to donate money to considering the crazy stuff they are also going through at the moment with Covid-19.”

Due to the birth of his son, as well as family and work commitments, Johnson’s first stint at Sale FC came to an end in 2018 as he moved back to Huddersfield.

“At Huddersfield, I obviously have a good connection with the club so it was an easy decision to come back when that offer was on the table,” Johnson recalls. “They had some injuries at the time and it just fit pretty well around my family life. We ended up finishing fourth which was a decent finish.”

After guiding Huddersfield to a very strong position in the fourth tier, a return to National One and Sale FC beckoned for Johnson at the beginning of this season.

Last year, Sale finished their maiden National One campaign in 11th place and the club were on course to better their achievements before the coronavirus pandemic curtailed the 2019/20 season, but the fly-half has mixed feelings when reflecting on this term.

“When we analyse things, we set some targets to finish higher than we did last year but to be honest with the squad that we had, I personally felt we could have done a lot better,” he adds.

“Our home form was really good. We lost three games there all season against Cinderford, which was our first game of the season, as well as Rams and Rosslyn Park so it was only really the top teams that turned us over at home.

“In fact, we beat Chinnor, we beat Richmond [champions] and the likes of Blackheath too, but it was just our away form which was really poor.  We were just lacking that bit of mental strength and away from home, you can’t afford to do that in this league and let games slip away from you. The league is too good.”

The early end to the season means players such as Johnson haven’t played a competitive game of rugby for almost two months, but the veteran fly-half hasn’t been putting his feet up.

His 2.6 challenge has allowed him to keep on top of his fitness and the No.10 knows there is still a lot more to come from him in the National Leagues.

“The season just gone, there were some games, in particular a Thursday night game against Birmingham Moseley, where it was freezing cold and raining,” he says.

“It was horrible and I was on that pitch thinking to myself whether I wanted to really continue doing this! I think I have played enough matches!

“This break is actually good for a lot of the lads around my age. We can just try and refresh the body. I can spend a lot of time with the family which I have not done for a while and actually get fit again. I have normally done the county season with Lancashire which goes on until the end of May and then you have a couple of weeks off before you are back in pre-season. You never really get that rest so now is actually good.

“I feel great at the minute so I have got a least another year in me, if not two, I am hoping!”