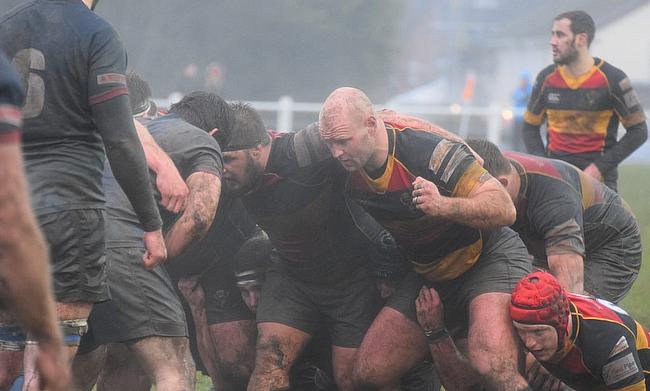 Newly promoted Cinderford have edged themselves to the summit of National One as they swept aside Loughborough Students in Round Four.

Paul Morris’ side secured their third successive victory which has moved them to the top of the division after Chinnor, who were promoted alongside Cinderford, lost their unbeaten record at home to an impressive Caldy side.

Like Chinnor, Old Elthamians also suffered their first defeat of the season as they were beaten by Rosslyn Park at the Rock.

Elsewhere, Blackheath saw off Darlington Mowden Park, Plymouth Albion battled past Ampthill & District and it was another home victory for Sale FC as they triumphed against Bishop’s Stortford.

Also in National One, there were welcome wins for Esher and Birmingham Moseley as they both secured their first victories of the new campaign.

Cinderford made it three wins on the spin to move to the summit of National One after an excellent second half performance against Loughborough Students.

Visiting fly-half Liam Hemming scored the only points of the first period from the tee as both defences were on top in the Midlands.

After the break, Cinderford cut loose and a score from Sam Smith on his debut plus a try via Hemming put the Foresters in control of this contest.

Charlie Reed landed a penalty for Loughborough, but the away side took the game by the scruff of the neck.

A penalty try as well as scores from Harry Hone, Smith and George Boulton wrapped up the victory for Cinderford while Henry Wheadon’s effort was merely a consolation for the winless Students.

Chinnor have dropped to second in the National One table after suffering their first loss of the season at home to Caldy.

Lock Thomas Sanders burrowed over for the visitors in the first period and was swiftly followed by prop Robert O’Donnell.

However, it was Chinnor who led 17-15 at the break following tries from Tom Ranaboldo, Kieran Goss and Tom Burns.

The hosts extended their advantage on 69 minutes as Benjamin Manning crossed after Harrison Crowe was shown a yellow-card for Caldy.

But, there was to be a late twist at Kingsey Road as Josiah Dickinson dotted down six minutes from time to secure back to back wins for Caldy while Chinnor tasted defeat for the first time since promotion.

Rosslyn Park have returned to winning ways in National One thanks to this victory over Old Elthamians at the Rock.

Tries from Benji Marfo and Conor Hayhow put Park in control before Alex Brown went over for OEs to make it 20-10 at the break.

Henry Robinson added another try for the hosts before the away side brought themselves right back into the contest following scores from James Golledge and Ollie Claxton.

However, Harry Leonard steadied the ship for Park with a penalty and any tension at the Rock was relieved when Jack Gash darted over to clinch the win.

‘Club’ edged a disjointed first half thanks to Jake Lloyd’s sniping finish in the corner and an Elliot Clements-Hill penalty.

The home side controlled the second period and sealed victory with Jack Daly’s try.

Plymouth Albion opened their account for the season at Brickfields as they grinded out a victory over Ampthill and District.

Dean Squire’s try gave Albion an early lead before Paul Davis dotted down from close range to extend Plymouth’s advantage to 12-0 at half-time.

Plymouth looked in control, but two yellow cards shown to Sam Daly and Jon Kelly allowed the A’s a route back into the game and they grasped the opportunity as Spencer Sutherland went over.

But, the home side manged to hold firm and they secured the victory late on through Rus Tuima.

Chris Johnson opened the scoring from the tee for the hosts, but Stortford grabbed the first try of the contest through Sam Winter.

However, a flurry of tries towards the conclusion of the first period proved to be the difference for Sale as Simon Griffiths, Paolo Odogwu and Jonty Rawcliffe all crossed to put the hosts 22-8 ahead.

Stortford tried to break down Sale in the second period, but the home side were strong in defence and were able to hold on to their 14-point advantage to secure their 24th straight league victory at home.

Esher got their first National One victory of the season with a narrow home win over Cambridge.

The hosts asserted pressure early on, before Jack Walsh finally crossed in the corner.

Esher could not build on their positive start as Cambridge reacted in the best possible way and they were awarded a penalty try to level up the contest.

However, the Surrey-based side did regain the lead just before the break through a penalty and a Charlie Gossington try.

Ben Penfold’s effort from the tee did reduce Esher’s lead to seven points, but the home side held on to claim their first win of the campaign.

Adam Caves scored four tries as Birmingham Moseley came from behind to seal their first victory of the season against Rotherham Titans.

Alex Dolly’s converted try and penalty put the visitors 10-0 up early on, but Caves crossed twice either side of another Dolly kick to make it 13-13.

Dolly continued his excellent display with another three points, but Caves outshone the full-back as he rumbled over for his hat-trick to give Moseley a half-time lead.

The decisive moment in this contest came shortly after the interval as Caves dotted down his fourth to put Moseley nine points ahead.

Dolly added two further penalties for Rotherham, but the boot of James Williams wrapped up a welcome victory for Moseley while the Titans slipped to their third loss of the term.