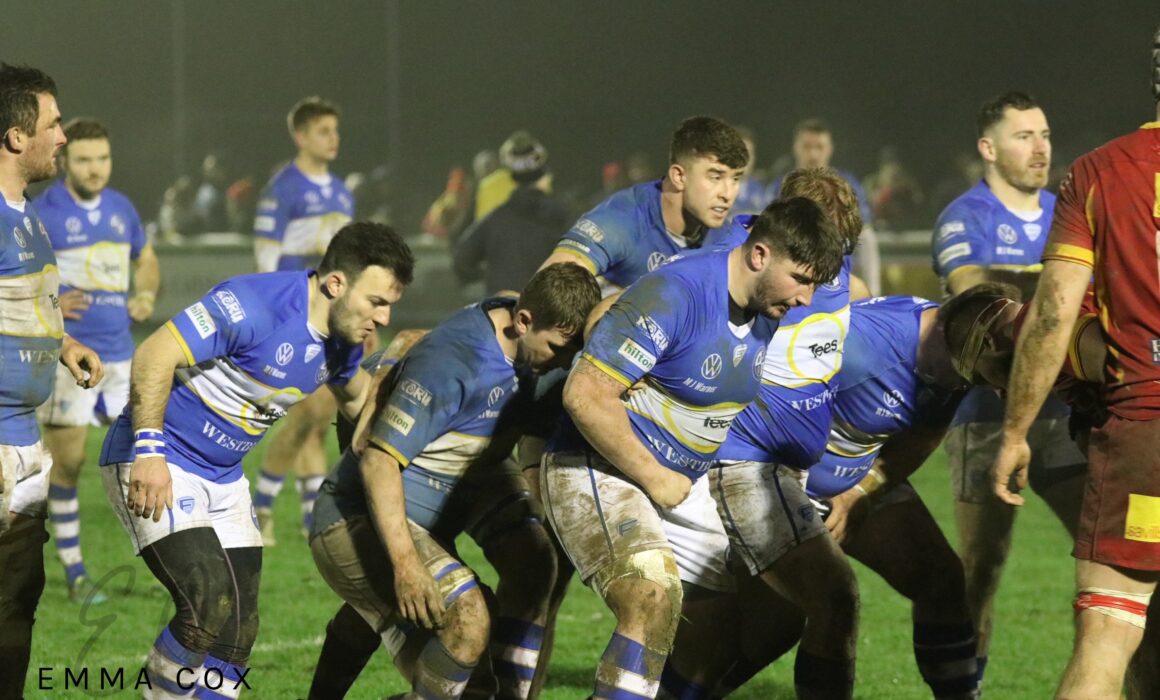 After a dramatic start to 2022, the National League season enters Round 17 with the spotlight on promotion and relegation battles. (Photo Credit: Emma Cox)

Whilst their rivals squabbled for positions last week, Rosslyn Park raised their own title credentials as they began 2022 with a hard-fought win over an improving Leeds Tykes outfit. After struggling against Cambridge before the Christmas break, Round 16’s visit to Headlingley was another test of their mettle, but Kieran Power’s side achieved the desired outcome.

Park are now six points clear of the chasing pack with a game in hand over nearest challengers Cinderford, but the league leaders will be aware Saturday’s opponents – Taunton Titans – will pose a threat. Tony Yapp’s men may have gone under the radar, but they will arrive in the capital on a four-game unbeaten run. This is the Titans’ first-ever season at this level so their current standing of seventh place has to be applauded, but given they were soundly beaten 40-14 back in Round Three by Rosslyn Park, they will know the size of the task which lies ahead.

A rivalry resumed. Second-placed Cinderford lock horns with old foes Chinnor (8th) in Round 17 with both sides keen to return to winning ways. The latter have not played since 11th December when they suffered a 23-19 home loss to Bishop’s Stortford, so the Black and Whites will be itching to take to the field for the first time in just over a month.

As for Cinderford, they have played twice since then, but enter this clash on the back of a damaging defeat to top two rivals Caldy. Paul Morris’ men have actually won just two of their last seven games so when you combine the fearsome battles these two had when they were in National Two South with possible promotion ambitions also on the line, then we should be in for a feisty encounter at Dockham Road.

From top to bottom we go and whilst the race for promotion continues to hot up, the battle to avoid relegation is becoming increasingly intriguing as sides towards the foot of the table target wins. Bishop’s Stortford have not tasted victory for just over a month and their most recent triumph against Chinnor is their only success since the middle of November.

Last weekend, Tom Coleman’s side slipped into the bottom three following a testing trip to Plymouth Albion and they have now joined Leeds Tykes, who they face on Saturday, in the danger zone. Phil Davies’ charges are just two points behind Stortford with two games in hand but despite losing their opening game of the New Year, the performance against Rosslyn Park highlighted the positive steps the Tykes have made since the beginning of the campaign. Both clubs will know a victory in Round 17 could prove to be crucial as the final third of the season slowly comes into view.

Elsewhere in the third tier, Caldy (3rd) will be out to continue their phenomenal term when they visit a Birmingham Moseley side buoyed by their away success at Blackheath whilst Sale FC (4th) take on bottom of the table Tonbridge Juddians and Rams RFC face Plymouth Albion.

Blackheath’s trip to Darlington Mowden Park has been postponed due to a frozen pitch.

Hull are flying in National Two North. Six straight victories for Gary Pearce’s side leaves them on top of the pile, but they have certainly earned the right to be in that position. During this winning run, the Yorkshire club have beaten three of their fellow promotion rivals – as well as near neighbours Hull Ionians – so confidence will be coursing through their veins ahead of Round 17.

The men from Chanterlands Avenue now hold a five-point lead, but they face a tricky assignment away at Sheffield Tigers on Saturday. Since the last time these two teams met, Jamie Broadley’s men have seen a symmetry in their results. Three defeats have been followed by three victories and currently, the men from Dore Moor are experiencing the positive side of that sequence. A trio of recent wins leaves the Tigers on the cusp of the top half so can they make it four in a row for the first this term to halt the league leaders?

Rotherham Titans would have let out a huge, collective sigh of relief last weekend as they held on to what could be a vital 13-12 win against promotion contenders Sedgley Park. Steve Collins’ last minute conversion sailed agonisingly wide of the target, but from a Titans point of view, it meant their unbeaten record remained intact and they are now up to second in the standings.

Adam Byron’s side look as though they hold all the cards in this compelling title race as Rotherham have two games in hand over table toppers Hull, but it certainly won’t be a straightforward task for the Yorkshire outfit when they visit Bournville in Round 17. The Chocos will be hoping last Saturday’s win over Harrogate can re-energise their season after entering the New Year on the back of eight defeats from their previous nine games. The reverse fixture between these two in September served up 13 tries and 94 points so more of the same please?!

Sedgley Park will be getting sick to death of losing to their title rivals by the finest of margins. Last week’s near miss against Rotherham Titans was the latest narrow defeat The Tigers have suffered this term with recent games against Hull and Stourbridge also ending in defeat for Scott Barrow’s men.

Nevertheless, Sedge are still only five points behind the league leaders having played the same amount of games but they will want to hit back at the first attempt when they host Wharfedale on Saturday. The Greens will be keen to shake off any left-over rust from the Christmas break after losing their 2022 opener against Sheffield Tigers last time out but encouragingly for Dale, they did win their last away fixture (20-12 v Huddersfield on December 11th) so can they experience some more success on the road in Round 17?

Following their setback against Hull, fifth-placed Stourbridge will also be searching for an immediate response this weekend when they host Chester whilst Fylde (4th) take on Huddersfield as they look to keep pace with the frontrunners.

It is also sixth v seventh on Saturday as Hull Ionians entertain Loughborough Students whilst elsewhere, Tynedale visit Luctonians in one of the featured matches on The National League Rugby Review Show and the bottom two – Harrogate and Blaydon – meet at Crowtrees.

The movement at the top of National Two South was a constant theme throughout the first half of the season and the changes at the summit continued in the opening round of matches in 2022. Redruth were removed from pole position by Clifton, who put their foot on the accelerator in the second period to dispatch Leicester Lions.

Matt Salter’s side have now put together seven straight wins and the Lavender and Blacks hold a one-point lead ahead of their meeting with Barnes on Saturday. Clifton will be extremely wary of their opposition given the men from the capital dented Redruth’s promotion bid last time out. Angus Farquhar’s late score secured a superb win for Joe Gray’s side and it is now six games unbeaten for Barnes. Chairman Michael Whitfield told me this week not to ‘jinx’ the club given the run they are on, but they have shown they are more than capable of toppling another one of the leaders this weekend.

Esher’s title tilt is growing as each week passes by and the second-placed side stretched their winning streak to eight matches in Round 16 after a battling victory over Dings Crusaders. The Bristol outfit gave the promotion chasers a good test last week so if there was any post-Christmas sluggishness from Peter Winterbottom’s side, it was quickly shaken off.

The Eees will now be strong favourites to secure their ninth triumph on the trot when they visit Barnstaple this weekend, who had their meeting with Westcliff postponed last Saturday due to Covid-19 concerns. Given their last two home fixtures have been against Redruth (3rd) and Henley Hawks (4th), things don’t get any easier for the Chiefs as they go in search of their first victory since October.

MATCH PREVIEW | The Hawks entertain @RedruthRugby at Dry Leas tomorrow, kick-off 3pm. We're also the key game on the @Natleague_rugby Review Show. All the info about subscribing is in the poster attached.

And The National League Rugby Review Show’s Key Game of the week comes from Henley Hawks as they welcome promotion rivals Redruth to Dry Leas. Starting with the latter, Nigel Hambly’s side were stunted in Round 16 as late drama saw them fall to a 17-14 loss to Barnes and it means they were knocked off top spot.

The Reds are still only two points off the summit with a game in hand, but Henley could really catapult themselves into this title race if they were to inflict another defeat on their visitors. Nigel Dudding’s charges were made to work extremely hard for their recent win over Hinckley, but it is now just one defeat in the last seven for the hosts. This ever-changing picture at the sharp end of National Two South will once again look different on Saturday evening.

Worthing Raiders (5th) kept up to speed with the leading pack last week and Round 17’s fixtures pairs them with Canterbury whilst Old Albanian (6th) host Hinckley.

Elsewhere, Leicester Lions will be keen to return to winning ways at the first attempt when they welcome Westcliff to the Midlands whilst Guernsey Raiders entertain Dings Crusaders and Bury St Edmunds travel to Rochford Hundred.