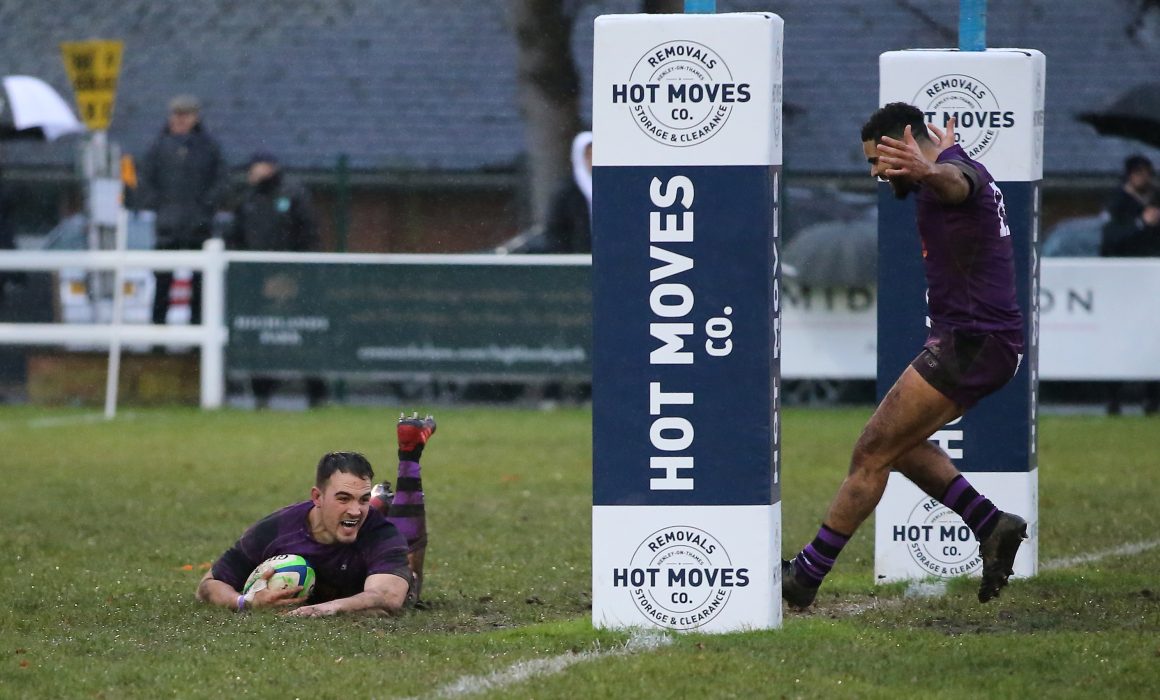 Successive wins for a host of National League clubs leaves them in a strong position heading into October while superb comebacks and see-saw contests only enhance an excellent start of the season. (Photo Credit: Steve Karpa)

Rosslyn Park head into October as the new early leaders of National One after a comfortable 66-19 victory over Hull in Yorkshire.

Charles Walker shone in the 10-try romp, as he claimed a hat-trick while fly-half Craig Holland kicked 16 points.

Hull responded to scores from Walker, Ben Howard and Oli Robinson when Mike Adlard went over, but the visitors quickly regained control.

Walker (2), Fred Hosking and Dan Laventure all touched down before Sione Afu got one back for the home side. Park’s ruthlessness only continued though as Seb Strang and Matthew Bolwell got in on the act, with Will Harding adding the gloss late on.

Iosefo Taunei Turaga claimed Hull’s third try of the afternoon but as September comes to a conclusion, Gary Pearce’s men are still searching for their maiden win in National One.

It was also another comprehensive performance from Rams RFC as they secured their fourth bonus-point success of the campaign with a 40-10 triumph away at Bishop’s Stortford while Sale FC had to battle back from a slow start against Taunton Titans to clinch a 31-24 victory at Heywood Road. Cambridge are the only other side to collect maximum points throughout the month as they narrowly edged out Darlington Mowden Park 32-31 in the North East.

Junior Nu’u scored a late converted try to secure Leeds Tykes’ first victory of the season against Esher, who are still yet to get off the mark.

Tries by Will Foster and Pierre Thompson put Esher in front but Seremaia Turagabeci and Grayson Maguire replied to give the Yorkshire outfit a slender 14-12 half-time lead.

A penalty try put Esher back ahead before Sam Morley converted his own try on the hour to give the hosts a 12-point cushion.

However, the Tykes rallied as John Okafor hit back almost instantly before Nu’u dotted down seven minutes from time. Tighe Maxwell-Whiteley made no mistake from the tee as Jon Callard’s side opened their account for the season.

Elsewhere in National One, Cinderford recovered from 21-0 down to clinch a 41-28 win over Plymouth Albion thanks to an inspired display by scrum-half Mike Austin and four tries in the final quarter helped Chinnor record their first win of the campaign as they turned things around to beat Birmingham Moseley 38-21.

Fylde showed their fighting spirit against Hull Ionians as they fought back in the second half to seal a 34-31 win at Brantingham Park.

Josh Britton, Lewis Minikin and Nathan Hill all crossed for the I’s as the hosts built a 24-17 advantage.

But Ben O’Ryan, Tom Grimes and Scott Rawlings added to earlier scores by Greg Smith and Ben Gregory to help Fylde on their way to a fourth successive bonus-point win.

George Mewburn’s late effort did set up a tense finale in Yorkshire, but the home side had to settle for two bonus-points as their unbeaten start to the term came to an end.

Sedgley Park’s strong beginning to the campaign continued in Round Four as they eased to a 41-10 victory over a winless Harrogate side while Rotherham Titans and Wharfedale completed September with three wins from four after triumphs against Tynedale (37-7) and Blaydon (46-7), respectively. The Titans produced a blistering first half display at Clifton Lane with Wharfedale doing the same in the second period in the North East, fly-half Tom Mann scoring 18 points in the process.

Preston Grasshoppers were able to claim their first win of the new season as they defeated Huddersfield 32-12 at Lightfoot Green.

Both sides had two players sin-binned during this contest but the spoils went to the hosts in Lancashire.

Meanwhile, Harrison Vare’s try proved to be the difference as Chester beat Sheffield 8-5 and Otley picked up their second win on the spin following a 24-8 success over Sheffield Tigers.

Blackheath produced a statement of intent in Round Four as they thrashed Canterbury 57-12 at The Marine Travel Ground.

Centre Jake Hennessey scored a hat-trick while Alex Harris crossed twice for Blackheath, with Alex Evans and James Stephens replying for Canterbury in the second half.

Freddie Owen, Stephen Leonard and Jake Lloyd also went over for James Shanahan’s side, who now sit on top of the pile in National Two East.

Henley Hawks’ 29-12 victory dislodged Barnes from the summit of the division as Nigel Dudding’s charges claimed a third consecutive win.

Barnes had prop Rory Marsh sent off for a second yellow card on 72 minutes but up to that point, the contest was still in the balance.

Ewan Fenley and David Manning both touched down in the opening period for Henley but on both occasions Barnes answered back with Will Lewin and Giles Bromley-Martin going over.

Max Titchener landed a penalty to give the Hawks some breathing space but after Marsh was dismissed, the hosts hammered home their advantage with Tom Vooght and Leo Webb finishing the job.

Just five points separate first place down to 11th in National Two East and Old Albanian have squeezed themselves into third spot after an excellent 32-20 win over Tonbridge Juddians. Samson Adejimi grabbed a brace for OAs while Bury St Edmunds winger Will Affleck was also at the double as his side survived three yellow cards to secure a 38-28 win over Westcliff.

Elsewhere, Sevenoaks produced a storming comeback to claim a 26-26 draw against Dorking, Worthing Raiders made it back-t0-back wins after defeating Rochford Hundred 33-28 on the road and Guernsey Raiders capitalised on an early red card shown to North Walsham’s Alfie Coop to record their opening win of the term. Centre Callum Roberts was the star of the show at Footes Lane as he scored a hat-trick in the 58-17 success.

Exeter University maintained their 100 per cent record in National Two West with a bonus-point 45-24 victory over Stourbridge, who are still looking for their first win of the season.

The Midlands club did claim a try-bonus point to open their account for the campaign, but once again, the afternoon belonged to the newly-promoted side.

Stour twice led through Tim Bitirim and Matt Moseley’s tries but Exeter hit back with two quick-fire scores before half-time from Edward Thomas and Orson James to add to Ronan Kelly’s earlier effort.

James, Kelly and Thomas all went over again in the second period while Josh Cunningham also crossed. Stour’s bonus-point was confirmed through Dallas Ororo and Moseley, but four wins from four has been a dream start for Exeter.

Leicester Lions are also one of the pacesetters in the division as they beat Luctonians 43-37 to record their fourth successive win of the campaign in a breathless encounter at Mortimer Park.

Gareth Collins’ side, who have now won their last 12 National League Rugby fixtures, were never behind in a contest which ebbed and flowed throughout.

The Midlands outfit were 24-11 in front at the interval with Ed Sumpter, John Murdoch, Alex Wilcockson and Devon Constant all going over, while Tom Jones’ try and the boot of Louis Silver kept the home side in touch.

Owien Harriott-Davis and Jamel Hamilton exchanged scores but either side of the hour, Luctonians were able to pull themselves right back into this fascinating game.

Josh Nott and Charlie Grimes both crossed the whitewash to cut the deficit to four points but Aston Gradwick-Light’s try on 68 minutes was ultimately enough for Leicester Lions despite Grimes claiming a second late on.

Dings Crusaders also ticked off September with a maximum points haul, but they were made to work hard for their 45-41 victory against Bournville in another topsy-turvy National League Rugby affair.

Chris Rovey’s first half hat-trick was a highlight for the Crusaders and 20 minutes down the road, Finlay Sharp was doing similar for Clifton as his three tries helped the Lavender and Blacks to a comfortable 41-3 win over Old Redcliffians.

Elsewhere, Hinckley recorded their third win from their opening four games as they took advantage of some ill-discipline from Redruth to claim a 31-25 triumph, Newport (Salop) picked up their second home win on the spin as they beat Barnstaple 25-18, and Hornets got off the mark for 2022-23 with 40-38 victory over Loughborough Students.