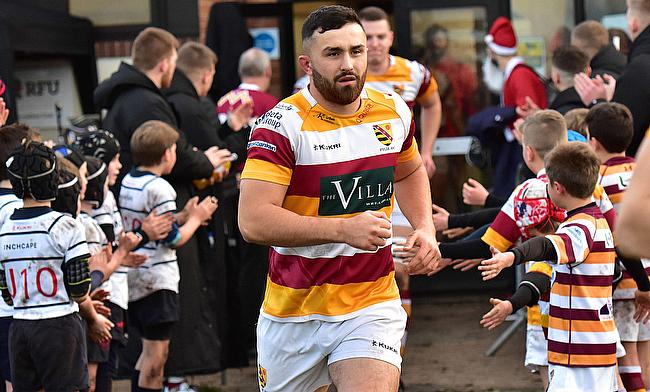 Speaking to ncarugby.com, Fylde’s Ben O’Ryan has revealed that his current first-team coach and former college tutor Warren Spragg played a big role in bringing him to the club. Photo Credit (Chris Farrow)

“He’d seen the worst of me and he’d seen the best of me, he’d seen me being an idiot,” O’Ryan said. “He had to read all my work for my BTEC so he knew what was going on inside my head.”

Placing importance on the camaraderie and family values associated with rugby, the ‘community club feel’ at Fylde greatly appealed to O’Ryan and it made his decision to play for the North-West club a straightforward one.

“Warren seemed to have a really good plan for what he wanted in the next couple of years to get us back up in to National Two,” he said. “He had a great squad full of young lads who were really hungry.

“One of my friends from Myerscough was at Fylde for a few years too so I thought that’s probably the best place to be.”

The family club atmosphere at Fylde seems to be one which O’Ryan relishes and, as he looks back on his career in Ireland and Australia, one which he has searched the continents to find.

“At training at Fylde there’s good banter,” he added. “You’ll get lads who are playing well and other lads will chip away at them but it’s all in good spirit.

“I’ve played at some clubs in the past where there were young lads breaking into the first team and then lads who are in their early thirties who have been pushed out of the squad giving them dogs abuse because they know their time is coming to an end.

“In training I’ve seen fights. I’ve seen somebody threaten to take somebody out to the car park after a game because they got a yellow card in what they thought was their last cup match.  “You’d never get anything like that at Fylde.”

After a strong season in 2018/19, O’Ryan struggled to maintain a first team place in the most recent campaign due to an AC injury to his right shoulder which he suffered in December 2019 and was loaned to Rossendale to ensure playing time.

Speaking about the disappointment in the Fylde camp due to missing out on the play-offs because of Covid-19, he told ncarugby.com that Spragg has already got eyes on promotion next season.

“The players have taken it on the chin and the mentality is ‘we go again’. As long as we keep the same squad and play as well as we did this year, we definitely have a chance next season,” O’Ryan said.

“It would have been nice to have that crack at the play-offs and Warren was backing us to have won that game but I don’t think we can cry over it.”

Fylde were second in the league with 90 points before the league was suspended by the RFU, but they missed out on promotion based on the ‘best record playing formula’ as National Two South’s Tonbridge Juddians claimed the final spot in National One.