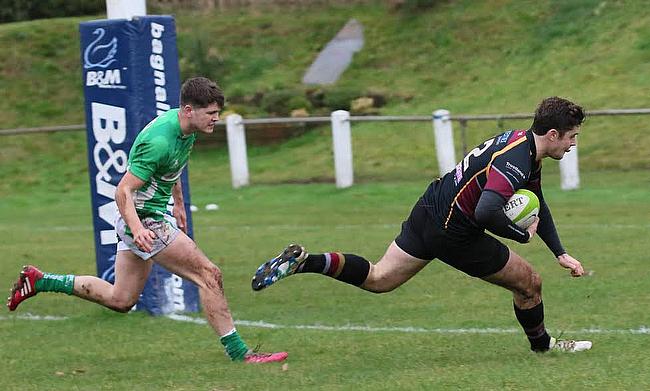 Caldy will head into the festive season and the New Year on top of National Two North after victory over Wharfedale in Round 15.

The league leaders extended their unbeaten run to 14 matches and remain nine points clear at the summit with one game of 2016 remaining.

Third placed Sedgley Park lost ground on Caldy and second placed Sale FC as they had to settle for their third draw of the campaign against Chester.

A rare away win for Stourbridge and a narrow local derby victory for Leicester Lions both of their promotion pushes alive while down at the wrong end of the table, the bottom four sides all lost over the weekend.

Caldy ran in nine tries to secure a bonus-point win against Wharfedale to head into 2017 on top of National Two North.

Forbes Edwards scored Caldy’s first try of the day before Jack Lavin crossed to extend their lead, but Robbie Davidson forced his way over for the hosts.

Davidson scored his and Dale’s second, but there was still time for Caldy to touchdown on two more occasions before half-time as Rhys Hayes and Lavin darted over to give the league leaders a comfortable 40-12 lead.

Nick Royle and Lavin rounded off Caldy’s 13th win of the season in the second-half and it sees Simon Verbickas’ men on top of the tree for Christmas.

Sale FC maintained their spot in the top two of National Two North thanks to this victory over Preston Grasshoppers at Lightfoot Green.

Scott Rawlings and Tom Alies scored first-half tries for Sale while Ollie Longmore’ effort and a Penalty Try were the only points scored in an ill-disciplined second period.

Tom Forster got the hosts’ only try in the first period with Lewis Allen landing two penalties.

The second-half saw 16 penalties awarded and four yellow cards shown, but despite Sale being down to 13 men at one stage, Preston just couldn’t take advantage as they stay bottom of this division.

Chester missed the chance to secure their first win in five matches as promotion challengers Sedgley Park fought back to earn a draw with 14 men.

A close range try as well as a score from Craig Ross gave Chester a 12-8 half-time lead, despite Sedge’s flanker being shown a red-card.

Chester slotted over a penalty to open the scoring for the second period and extended their lead to seven points, but a try from the visitors with five minutes to go set-up a tense finish.

However, both sides couldn’t fashion one more clear-cut chance and had to share the points at Hare Lane.

Stourbridge ended their away day woes as they secured their first win on the road since September 10th with victory over Tynedale.

Two tries as well as a penalty from Ash Smith gave Tynedale a slender 13-5 half-time lead.

A score from Joe Heatley was quickly cancelled out by a third try of the day for Tynedale and the same pattern followed as Ciaran Moore and Jack Harrison exchanged tries as Tyne moved 25-19 ahead.

But, two scores in the final 10 minutes from Jack Lea and debutant Dan Rundle turned the game around for Stour as the visitors snatched the win.

Joe Glover’s try and a penalty from Conor Eastgate gave Hinckley a 8-6 lead at the break after a tentative first-half.

Grayson had nudged over two penalties in the first period for the Lions, but the visitors did not score again until the final 10 minutes as Ian Smith rounded-off an excellent flowing move.

Eastgate then landed his second penalty of the afternoon to level the scores, but it was his opposite number Grayson that stole the headlines as he bisected the posts once again to secure the victory.

South had led 7-6 at half-time at Welford Road thanks to a Penalty Try converted by Rickie Aley while Sheffield responded with two Angus Bowyer kicks.

The hosts then went through the gears at the beginning of the second-half as Aley landed a penalty before the fly-half slipped out of a tackle to score a try which he converted to put South in control.

Jamie Broadley then gave the visitors a lifeline just after the hour as he crossed for Sheffield’s first try of the day, but South would have the final say as Warren’s endeavour saw him stretch over the line to continue the home sides’ good recent form.

Otley maintained their 100 per cent home record this season after an impressive victory over Harrogate at Cross Green.

Luke Chadwick and Henry Roberts both touched down for the hosts while full-back Tom Hodson kicked 16 points from the tee to seal their seventh straight victory on home soil this term.

Harrogate had actually taken a 10-0 lead thanks to a try from Oliver Rosillo and five points from the boot of Dan Matthews, but they could only muster up a second score after the break which came from Jonathan Giles two minutes from the end.

Scunthorpe earned their first victory in seven matches as they beat the Luctonians to move out of the bottom three in National Two North.

Tries from Colin Chapman and Steve Johnson gave the hosts a 12-6 half-time lead.

It got better for The Greens after the break as Sam Morgan added a third try of the day for the hosts before Johnson extended their advantage to 20-6 with a penalty.

But the Luctonians fought back as Charlie Grimes dotted down before the visitors were awarded a Penalty Try which moved them to within two points of Scunthorpe with three minutes remaining.

However, the home side were able to control the tempo and possession in the closing stages of this encounter to gain a much needed victory.