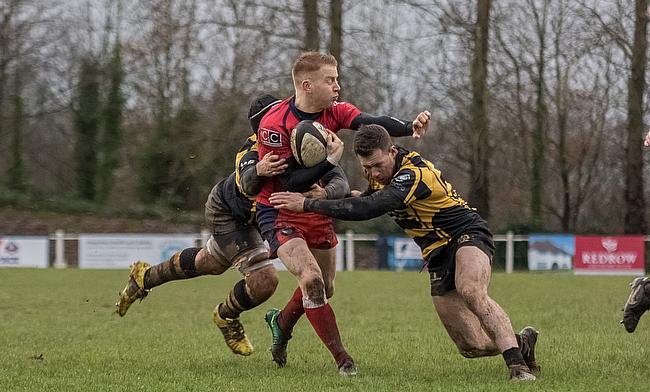 Hinckley failed to extend their lead at the top of National Two North as they suffered their first loss since October. Photo Credit: Gareth Lyons

George Chuter’s side fell to defeat late on at Chester as an Andy Baston score clinched the win for the Cheshire outfit.

The Midlands club are three points clear at the top, but the teams directly below them all have games in hand.

With Sale FC and Tynedale not in action due to postponements, Sedgley Park and Stourbridge gained ground on the front-runners with victories.

Elsewhere, Leicester Lions edged past Sheffield Tigers and Otley moved out of the relegation places after a win at Luctonians. Blaydon’s fixture with South Leicester was also called off.

Hinckley’s eight game winning run came to an end as the league leaders were beaten by Chester at Hare Lane.

The visitors went into the match having not lost since the beginning of October, but a late try from Andy Baston inflicted a defeat on the Midlands side.

Thanks @Hinckley_Rugby another great team in #nat2 what an exciting nail biting game . Hope you have a safe journey home https://t.co/gNGZyC1Xjx

Alex Croft opened the scoring for Chester, but Mitch Lamb’s try before the break kept Hinckley in touch.

Callum Dacey’s penalty on the hour gave Hinckley the lead, but Baston’s effort three minutes from time clinched victory for the Cheshire outfit.

Sedgley Park moved up to third in National Two North as they returned to winning ways with a bonus-point victory over Sheffield.

Sedge, who have won seven of their last nine games, took a deserved 17-0 lead into the break thanks to 12 points from Steve Collins and a try from Callum McShane.

Gareth Burns and Dan Rylance both crossed for Sheffield, but after back to back wins, this was a tough afternoon for the men from Abbeydale Road.

Stourbridge secured their first win since the end of October as they recovered from a slow start to beat Macclesfield.

The hosts did lead 13-10 at half-time, but Dan Lomax’s try kept Macc in touch and the visitors continued to battle despite an improved performance by Stour after the interval.

Scores via Brendan Berry and Chris Townsend were just reward for the Blues, but in the end, Stour proved too strong.

Leicester Lions ended a run of consecutive defeats as a gutsy display saw them edge past Sheffield Tigers.

The Lions were 8-0 up at the break, but a Jamie Broadley try brought the Tigers right back into the contest after half-time.

However, a penalty from the hosts was enough to see them over the line which was the perfect way for Drew Rudkin to celebrate his 250th appearance for the club.

Otley moved out of the bottom three in National Two North after sealing an impressive victory at Luctonians.

Flanker Tom O’Donnell burst through Lucts’ defence to touch down and Joe Rowntree added two penalties to give Otley a 13-8 half-time advantage.

Otley’s Joe Graham extended the lead, before Lucts’ Josh Watkins crashed over to add to Guy Kirby’s first half effort, but the hosts couldn’t find another score to claim a losing bonus-point