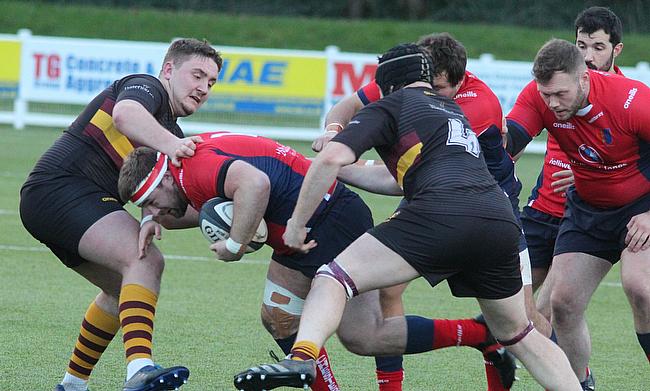 A winning start to 2023 for teams battling towards the wrong end of their respective divisions was the perfect way to begin the New Year for a trio of clubs. Photo Credit: (Jonathan Cain)

Chinnor created some daylight between themselves and the relegation zone in National One as they hammered Rosslyn Park 48-12 in a sensational first game in charge for Nick Easter.

The hosts scored seven tries including a pair for Max Clementson while Luke Carter, Will Feeney, Mark Darlington, Finn Theobald-Thomas and Kieran Goss also got in on the action.

Charlie Walker and Benji Marfo had crossed for the visitors to put them 12-0 ahead after only eight minutes, but Chinnor roared back to secure just their fourth win of the campaign and crucially, they are now seven points clear of the bottom three with two games in hand.

As we begin the festive break, National League Rugby caught up with new @ChinnorRFCThame DoR @nick_easter 🏉

It was also moving day for Esher who jumped out of the drop zone following a 24-14 victory over Birmingham Moseley.

Before the Christmas break, Peter Winterbottom’s side had given their survival push a real boost after collecting 15 points from their last five games and their third consecutive home win means the EEEs are now three points above the dreaded dotted line.

Successes for both Chinnor and Esher meant Taunton Titans fell into the relegation places after suffering their seventh straight defeat.

Tony Yapp’s charges lost 36-8 at home to third-placed Cambridge, who were guided to victory by Ben Brownlie and Anthony Maka. The win for the Blood and Sand keeps them in touch with the top two after Sale FC and Rams RFC kicked off 2023 with wins.

The league leaders maintained their four-point gap at the summit thanks to a battling 45-35 triumph over Plymouth Albion – with Josh Brown and Tom Walsh at the double – and it wasn’t a comfortable afternoon for Rams (2nd) either as they held off a spirited fightback from bottom-of-the-table Hull to record a 24-19 victory in Yorkshire.

Hull, now under the stewardship of Mike Umaga, scooped up a losing bonus point as did relegation rivals Leeds Tykes thanks to a late Kieran Davies penalty in their 23-17 defeat to Cinderford.

Meanwhile, Bishop’s Stortford began the New Year with a last-gasp 12-10 win against Darlington Mowden with flanker Will Rogers scoring the decisive try one minute from time.

Huddersfield secured their third win from their last five matches after recording an impressive 20-19 victory away at Chester.

Tries from Rob Jennings and Finlay Stewart put Huddersfield ahead 12-11 in the first half, with Chester responding through the boot of Gethin Long and Harry Wilkinson’s score.

Will Milner and Long swapped penalties before a second-half try from Kyle Joseph put Chester ahead for the first time at Hare Lane.

However, the key moment in this contest came on 69 minutes as Ethan Myers’ effort ultimately clinched another precious victory for Gareth Lewis’ men.

Their upturn in form in recent weeks has seen them create a nine-point gap between themselves and the drop zone and Field were the only side in the bottom five to pick up points in Round 15.

The two clubs currently in the relegation places – Blaydon and Harrogate – both suffered defeats to begin the New Year with the North-East outfit falling to a 47-19 loss at home to a Jack Hedley-inspired Rotherham Titans after the winger grabbed a hat-trick at Crowtrees.

As for Harrogate, they were on the wrong end of 52-0 thumping by promotion-chasing Fylde who remain hot on the heels of league leaders Sedgley Park. The table-toppers were able to maintain their two-point gap following a 46-7 success against Preston Grasshoppers.

Tom Ailes and Jamie Harrison both scored twice for The Tigers – who stretched their winning run to 13 matches – while elsewhere, a blistering opening half an hour set the platform for Hull Ionians to beat Wharfedale 37-24. There was also a maximum for another in-form side,  Otley (4th), who saw off Sheffield 25-3.

Finally in National Two North, there were more home comforts for Sheffield Tigers as they sealed their fourth consecutive victory at Dore Moor after dispatching Tynedale 26-7.

Dorking once again snatched victory from the jaws of defeat against Barnes as Toby McRae’s last-minute try clinched a 17-13 triumph for the Red and Whites.

Back in September when the two promotion contenders met in the reverse fixture, No.8 Finn Osborne was the hero for Dorking as his late effort stole the win, and lightning struck twice for Armand Roux’s men on Saturday.

Barnes led 13-10 at half-time thanks to scores from George Dean and Will Lewin while the hosts stayed in touch via Will Scholes and James Catton.

The second period was scoreless and it looked as though Dorking were going to fall to a defeat when Osborne was yellow-carded eight minutes from time, but McRae’s brilliant finish secured the win and left Barnes heartbroken once again.

The result for Dorking (4th) leaves them nine points off the top and one place and one point behind Barnes in the standings.

Speaking of the league leaders, Blackheath remain six points clear after starting 2023 with a comprehensive 31-10 victory away at Rochford Hundred while second-placed Old Albanian beat North Walsham 31-7 at Woollams. Dan George and James Osborn’s men were inspired by Saracens academy starlet and now England u20 international Toby Elliott who scored a hat-trick and kicked two conversions despite the hosts having prop Harry Samuel sent off.

Below the top four, Worthing Raiders are still in the hunt after extending their winning run to four matches as they held off a revival from Sevenoaks to earn a 21-19 victory.

The determination shown by Sevenoaks earned them a losing bonus point in their fight to avoid the drop and relegation rivals Canterbury are now level on points with their Kent compatriots after defeating Westcliff 52-14. Will Waddington was the star of the show for Matt Corker’s men as his hat-trick arrested a sequence of five straight losses.

Leicester Lions displayed all of their title credentials in Round 15 as they eventually secured a 38-32 win against a spirited Newport (Salop) who deservedly picked up two points in this entertaining contest.

Tries from Oli Taylor and James Stubbs helped the league leaders into a 14-8 lead after 15 minutes – with Perez Raqio going over for Newport – but the home side stunned the table-toppers moments later.

Reece Beddows and Jacob Leonard both crossed to flip the game on its head but the Lions hit back before the break through wingers George Watkins (2) and Devon Constant.

Raqio’s second on 47 minutes kept things tight and even after Ben Young and Leonard exchanged penalties, the game was still in the balance.

However,  Newport were unable to penetrate the Lions’ defence in the final quarter and had to settle for two points which did lift Bob Adams’ side out of the relegation places.

As for Leicester Lions, they are still 11 points clear at the top after Clifton (2nd) defeated bottom-of-the-table Stourbridge 27-12 in the Midlands but their victory was overshadowed by a serious injury to Danny Openshaw. The club announced on Sunday the scrum-half had broken his leg but is in “good spirits” and all at National League Rugby wish him a speedy recovery.

Third-placed Hinckley recorded their sixth victory from their last seven games as they capitalised on Barnstaple’s indiscipline to secure a 38-5 win while Dings Crusaders (4th) beat Bristol rivals Old Redcliffians 30-27 at Shaftesbury Park.

A late rally by Old Reds meant they headed back down the M32 with two points and it leaves them eight points clear of the bottom two with three games in hand.

Bournville fell back below the dreaded dotted line after they were thrashed 52-0 by an in-form Luctonians outfit, with scrum-half Louis Silver accumulating 22 points at Mortimer Park.

Also in National Two East, Hornets remain in the relegation battle but produced an encouraging display in their 38-27 loss to Redruth while Orson James’ try six minutes from time secured Exeter University a 17-15 win over rivals Loughborough Students.