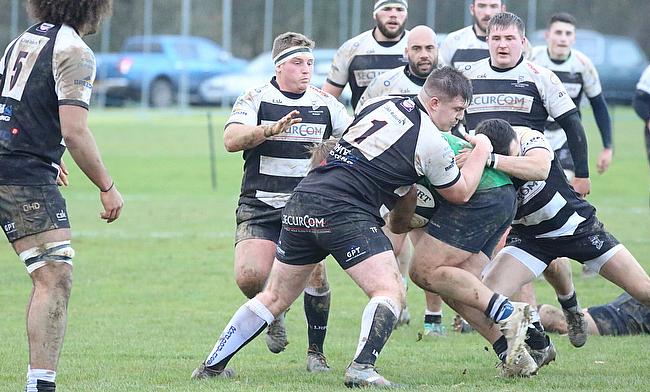 Ryan Watkins’ men ended November with two crucial victories and now they find themselves out of the drop zone heading into the Christmas period.

Hoppers are seven points adrift of safety following this defeat and Huddersfield also dropped into the bottom three after their loss to league leaders Caldy.

Caldy are now three points clear at the top after their 12th straight win whilst Fylde and Sedgley Park remain firmly in the hunt after respective victories over Otley and Sheffield Tigers.

Elsewhere, Loughborough Students hammered Wharfedale, Chester defeated Tynedale, Hinckley cruised past Stourbridge and Hull took another big step away from the relegation battle thanks to a win against Scunthorpe.

Caldy produced yet an excellent second-half display to beat Huddersfield and secure their 12th consecutive win.

The visitors dominated the scoreboard in the first half with Lewis Bradley going over whilst Will Milner kicked eight points to give Field a 13-6 lead at the break.

However, a penalty try awarded to Caldy on 49 minutes took the wind out of Huddersfield’s sails and the league leaders began to go through the gears.

JJ Dickinson scored twice, either side of John Collister’s effort, to seal the win for Caldy which leaves them three points clear at the summit of National Two North.

Fylde bounced back from last week’s defeat against Hull to clinch a hard-fought away win at Otley.

The Lancashire club had to come from behind at Cross Green as early converted tries scored by Elliot Morgan gave Otley a 14-0 cushion.

However, their lead was cut to just two points before oranges as Tom Grimes and Ben Vernon both dotted down for the visitors.

It was all Fylde following the restart as Grimes swiftly gave the Lancashire club the lead before two penalties from Greg Smith guided the away side to victory.

Sedgley Park are continuing to hunt down the top two in National Two North as a bonus-point win over Sheffield Tigers saw Scott Barrow’s side complete a perfect November.

Tries from Leon Simpson and Will Lees helped Sedge to a 15-14 lead, with Ollie Glasse also landing a penalty.

Sheffield Tigers’ tries had come via Alan Symcox and Louis Townsend, but they were unable to trouble the scoreboard again until the final 10 minutes as Sedge took control.

Matt Gallagher and Bob Birtwell powered over in the second half for the away side and despite Pete Swatkins scoring for the Tigers, Sedge saw out a fourth successive victory.

Wharfedale are now only three points clear of the relegation zone in National Two North after falling to their third consecutive loss against Loughborough Students.

The Students led 24-7 at the interval as Charlie Hudson, Will Lane and Josh Lewis all crossed, with Jack Hirst dotting down for Dale.

Lboro controlled the match at home in tricky conditions. A resilient defense and great counter attacks saw us through for the 5 points!

Lane’s second, as well as an excellent brace from Bamidele Fadahunsi, wrapped up an impressive Loughborough display whilst Owen Waters also kicked two penalties for the home side.

Dale’s second try came through Josh Burridge, but with the teams beneath them beginning to pick up points, the Greens will be hoping to halt their mini-slump sooner rather than later.

The try-bonus point was recorded just after the interval following scores from Harry Wilkinson, Will Du Randt, George Baxter and Scott Robson.

Second-half efforts from Shay Owen and David Ford added the gloss to the victory for Chester.

Jonathan Burden and Jack Ouston did cross in the first period for Tyne to make it 12-12, but Seamus Hutton’s effort late on proved only to be a consolation for the North-East club.

Hinckley’s excellent recent form at Leicester Road continued in Round 13 as they breezed past Stourbridge.

The hosts set the tone in the first period as a double from Mitchell Lamb, plus eight points from the boot of Joe Wilson, gave Hinckley an 18-3 lead.

Alex Salt and Luke Coltman scored further tries after the break as the Hornets secured their third successive home win.

Hull are now 14 points clear of the relegation places in National Two North as they defeated Scunthorpe, despite having Laurence Cowen sent-off late on.

The hosts led 15-6 at half-time following scores from Mike Adlard and Stephen Johnson, whilst Paul Cook and Will Robinson landed penalties for Scunthorpe.

The hosts extended their lead after the break as Tom O’Donnell touched down to keep the Yorkshire club in control.

Johnson then receive a yellow-card for Hull and whilst Scunthorpe did take advantage through Jake Scorer, the home side were also able to go over when reduced to 14-men as Alex Heard crossed.

Nick Dyson pulled one back for Scunthorpe before Cowen was shown a red-card with five minutes remaining, but Hull had the final say as a second for O’Donnell wrapped up another important triumph.

Lucs, who defeated Scunthorpe last week, raced into a 15-0 lead as Seb Robinson-Hall and John Morris both scooted over.

What a great Saturday at Mortimer Park.
Our 1st XV won 29- 3 against @RugbyHoppers, it was a great game and lovely to see so many of their supporters make the journey- safe trip home! Whilst our 3rd XV also secured a home win! #wearelucs #luctonians

Alex Hurst landed a penalty for Preston on 22 minutes, but that was as good as it got for Hoppers as the hosts took control.

Louis Silver pinged over three points before half-time and in the second period, Rob Crowley and Guy Kirby touched down to secure a vital victory for Lucs.

The Herefordshire outfit are now two points clear of the bottom three whilst Preston find themselves seven points adrift of safety.