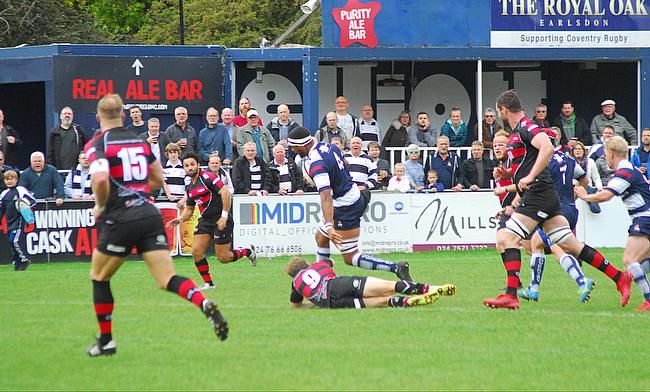 Darlington come from behind and Coventry control
Both Darlington Mowden Park and Coventry continued their perfect starts to the season in Round Four as they made it four wins on the spin.
Early table toppers Darlington came from behind to clinch a 31-17 victory away at Birmingham Moseley to stay a point clear at the summit while Cov ended Blackheath’s unbeaten beginning to the campaign thanks to a 37-10 triumph.
Rowland Winter’s men continue to make Butts Park a fortress as they sealed their 17th home win from their last 18 matches as they showed their quality in the second period to see off a strong Blackheath side.
Following Club’s lost, Plymouth Albion leaped into third spot as they ran in 10 tries in a rampant display against Fylde, who remain winless. Along with Albion, new boys Bishop’s Stortford also moved up a place in the division as Andy Long’s side made it three wins from four following an impressive result away at Rosslyn Park.
Elsewhere in the top half, Ampthill & District produced their most dominant showing of the campaign as they dotted down on seven occasions to brush aside Esher while Old Elthamians made it two successive wins thanks to a 36-20 victory over Loughborough Students.
The only two sides in the bottom eight in Round Four to win were Cambridge and Old Albanian. The Blood and Sand edged past Caldy on the Wirral to secure an excellent result while Gavin Hogg is off the mark at Old Albanian as the Hertfordshie side beat Hull Ionians 36-26 to leave the Yorkshire outfit still searching for their first win of the campaign.
Tyne leave it late again
For the second week running, Tynedale scored a late try to snatch victory from the jaws of defeat. Scott Lawson’s men were moments away from suffering their first loss of the campaign against Leicester Lions, but theytook advantage of ill discipline from the hosts to seal a 28-26 win right at the death.
It is four wins from four for Tynedale, but Stourbridge are the new leaders in National Two North following a commanding 45-10 win away at Wharfedale. Neil Mitchell’s side ran in six tries on their way to sealing a fourth successive triumph and it seems like the Midlands outfit are back to their best.
While Tyne and Stour remain unbeaten, Hinckley and South Leicester both tasted defeat for the first time this term. The former were beaten by Sedgley Park 49-29 in another entertaining encounter while South were edged out 29-22 away at Sheffield Tigers.
The Yorkshire side responded well from their mauling at Sale FC in Round Three but their near neighbours, Sheffield, slipped to a defeat in Manchester this weekend, losing 31-17 at Heywood Road.
The two other sides in the top half, Macclesfield and Luctonians, both fell to defeats as they lost to Huddersfield (who claimed their first win following promotion) and Chester, respectively.
Elsewhere, Ally Hogg would’ve had a smile on his face on Saturday evening as his Blaydon side finally got off the mark with a 35-24 win over Otley at Crow Trees.
Wild Geese run Cinderford close
Cinderford and Taunton Titans remain the teams to beat in National Two South as both picked up their fourth wins of the season.
After a ruthless display last weekend against Henley Hawks, Cinderford had to hold off a second half fight back in Round Four as they eventually edged out a spirited and much improved London Irish Wild Gesse side 29-21.
It was slightly more straightforward for Taunton who ran in seven tries against Wimbledon, who once again showed an attacking style of rugby but weren’t rewarded with their maiden win at this level.
It is now 21 games since Chinnor lost at Kingesy Road as a 36-14 win over Redingensians keeps Matt Williams’ side well and truly on the coattails of the top two. There were also wins for Redruth, Canterbury and Bury St Edmunds while Tonbridge Juddians picked up their first victory at home following a 20-14 triumph over Henley.
Elsewhere, Broadstreet narrowly missed out on their first ever win in National Two South as Darren Lloyd’s Clifton open their account for this campaign thanks to a 35-32 win in the Midlands.