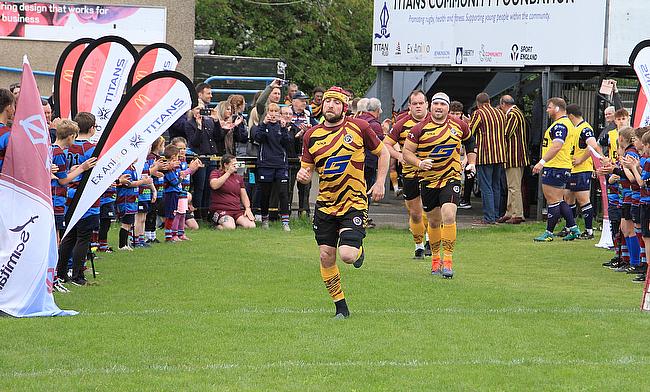 ‘Rugby, at its heart, is about community and bringing people together, in good times and in sad.’ (Photo Credit: Gareth Siddons)

The build-up to this weekend has been like no other. Since the announcement of the passing of Queen Elizabeth II on Thursday, sport has paled into insignificance.

Sensitive discussions have taken place as to whether the latest programme of National League Rugby fixtures should go ahead, but after confirmation from the RFU, we do have games in Round Two.

Of course, our clubs will pay their respects to the Queen in their own way and the hustle and bustle of a matchday will pause for a minute’s silence as the rugby community remembers the UK’s longest-serving monarch.

The sad news will be on the minds of everyone connected to National League Rugby and there will be a sombre feel to proceedings, but the show does go on at levels three and four.

Preparations continue ahead of a weekend full of local rivalries. Chinnor against Rams RFC on Friday night, Fylde’s visit to Preston Grasshoppers and Rochford Hundred v Westcliff immediately jump out at you as does Sheffield Tigers vs Sheffield.

Approximately two-and-half miles separates the Steel City clubs and almost exactly five years on from their last league derby at Dore Moor, the wait is finally over.

“You don’t have to hype the fixture up if, I’m honest!” Sheffield Tigers Director of Rugby Jack Howieson tells National League Rugby. “The lads do that for themselves. We try and pull them back a bit from thinking about it too much! Really, all you have to do is concentrate on yourselves and concentrate on your game plan and the rest will come together.”

The Tigers got their National Two North campaign off to a winning start in Round One thanks to a 20-15 victory away at Huddersfield, and now they are entering a fixture which they have won on five of the last six occasions (in the league).

However, Sheffield did beat their near neighbours 25-21 in the most recent meeting in December 2017 and after assembling a strong squad in the summer, Howieson is expecting a tough encounter in Round Two.

“Tigers, for the last few years, have been a division above Sheffield,” he adds. “You are expected to win these games based on that but what I will say is that Sheffield have been in all of those games and they definitely weren’t a walk in the park for Tigers. They will be very confident this weekend with the squad they have got so it will all make for a great game.”

Immersing yourself in a local derby is always something players and coaches need to consider when joining a new club. Howieson took on the role as Director of Rugby at Dore Moor almost a year ago but learning about the team and the rivalries connected to them is something which the former Rugby League star knows all about.

Now firmly in the Tigers camp, Howieson has represented Sheffield as a player in the last decade whilst also crafting his coaching skills at Abbeydale Park.

“I have actually been on both sides,” Howieson chuckles. “When I retired from Rugby League, I went to Sheffield and I was a player/coach down there. My son actually plays down there. He has played there since he was seven so I know a lot of people at the club really well on that side of it, but obviously coming on the Tigers side for the last year, it is exactly the same.

“There is a really fierce rivalry between the two clubs and I think historically, there has been players who have switched between the two clubs controversially sometimes, sometimes not! I have played in one derby for Sheffield and it was a really intense game. The physicality of the game just goes up a notch, especially in the first 15-20 minutes. It was something which was really good to be involved in and it is a big day for lots of people at both clubs.”

Howieson admits having a home derby game as the second fixture of the season is “fantastic” from a financial perspective, but also it puts a spotlight on Sheffield Tigers as a whole. Since the 41-year-old arrived at Dore Moor last October, his vision has been to link the 1st XV with all facets of the club and the community mantra doesn’t stop there.

The Tigers have also built a strong relationship with local club Sheffield Vulcans, who provide a safe place for LGBTQIA+ individuals or anyone wanting to participate in sports without worry of prejudice.

Next weekend, Tigers will be hosting the International Gay Rugby Association to celebrate the start of the season. “The IGR are coming to our club next weekend,” continues Howieson. “It is an international event with clubs coming from abroad, staying in Sheffield and coming up to Tigers.

The Vulcans would like to thank @MVSRUFC for putting our development squad through their paces. Both teams put a full shift in and there are lots of positives to take away from it. By the time the end whistle blew we secured a very close victory.

“The Vulcans are an all exclusive team and they train on a Tuesday up at the club and share the training pitches with us, they drink in the bar with us afterwards and it is a really nice environment.

“They needed somewhere to play and it just makes complete sense. It is brilliant for us and really good for them as well because it showcases the inclusive league and highlights what rugby in this city is all about. We really, really put a lot of emphasis on that one club feel.”

And all eyes will also be on the city this weekend as the Tigers and Sheffield renew acquaintances. Last Saturday, the visitors to Dore Moor lost 36-14 to Tynedale on their return to level four but despite that – and the strong record which Howieson’s charges have against their locals rivals – he believes past form will go out of the window.

“Without being arrogant, I think people will see us probably as favourites,” Howieson says. “They had a hard game last week up at Tynedale with a few disruptions and a couple of sin-bins so we are not really reading too much into the scoreline up there.

“If I’m honest, none of that really matters in a derby game. It is a bit like a cup final. Anybody can beat anybody on their day especially in this competition so we have just got to really concentrate on ourselves and make sure we are doing ourselves justice, do what the coaches are asking us to do and just try our best.”

Of course, the Sheffield derby is not the only local fixture taking place in Round Two. The drama begins on Friday night between Chinnor and Rams RFC, two teams that played out a thrilling contest in National League Rugby’s first-ever Live Streamed game back in March.

Rosslyn Park – who started the season with a bonus-point win over Cinderford – visit newly-promoted Esher in Round Two in another standout game in National One.

Elsewhere in National Two North, Blaydon v Tynedale will be the Key Game on The National League Rugby Review Show this weekend whilst in the East and West, the all-Kent affair between Canterbury and Tonbridge Juddians and the Midlands and Bristol derbies should serve up some interesting narratives.

But what is certain in Round Two, highlighted by Sheffield Tigers v Sheffield, is rugby, at its heart, is about community and bringing people together, in good times and in sad and we are sure National League Rugby will showcase its qualities both on and off the field.