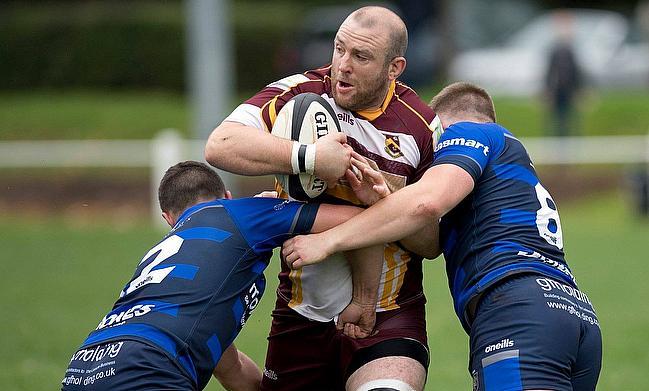 The top five sides in National Two North all secured victories in Round 18 as the race for promotion continues to intensify. Photo Credit: Ray Morris

League leaders Hull Ionians survived a scare against a strong Hinckley side to maintain their six-point lead at the summit while second-placed Chester also had to battle hard to claim a victory over Sheffield Tigers.

Down at the bottom, Peterborough Lions and South Leicester suffered losses against Stourbridge and Tynedale, while elsewhere, Sedgley Park picked up a morale-boosting win when they faced Preston Grasshoppers.

It was 14-0 to the I’s after two early tries from Lewis Minikin before Hinckley hit back through Ben Pointon.

Will Hardy scored a try for the hosts and Sam Wilson also touched down soon after half-time as the table toppers took a 26-10 lead.

However, tries from Callum Dacey and Mitchell Lamb, as well a penalty by Joe Wilson, helped Hinckley turn this contest on its head as they led by a point, but Adam Brown was able to seal the victory for Hull Ionians as the replacement scored their fifth try of the afternoon.

The hosts took an early lead through Shay Owen’s try and Chester increased their advantage further as Alick Croft and George Baxter both crossed.

However, the Tigers responded superbly to make it 19-17 at half-time following scores from Thomas Hart and Lewis Bloor, while Mark Ireland landed a penalty.

Ireland nudged over a penalty soon after the restart, but a second try for Croft put Chester back in front on 55 minutes.

Ryan Holmes then hit back for Sheffield Tigers as his try with 10 minutes to play gave the Yorkshire outfit a one-point lead, but there was to be a final twist as former Northampton Saint and England international Ben Foden snatched the win for Chester.

After two Harry Key penalties, Devon Constant scored Leicester Lions’ try just before the hour and the Midlands club fancied their chances of turning this game around.

But despite their best efforts, they couldn’t find another way past Fylde as the hosts, who suffered a couple of injuries in this contest, held firm for victory.

Sharpe crossed in both halves as Field led 23-0 after 51 minutes with Kian Stewart also going over for the home side.

Macclesfield responded with a try from Sam Stelmaszek, but Lewis Bradley cancelled it out just after the hour.

The same pattern followed as Dan Lomax’s try was matched by Field’s Francis Entressengle as the hosts sealed the win.

Macc did produce the final action at Lockwood Park as Myles Hall darted over, but it was merely a consolation for the Blues who are now 14 points from safety.

Otley maintained their excellent form this season as they picked up a derby victory over Wharfedale at Cross Green.

Charlie Maunder and Tom Casson’s side have now won nine of their last 11 games and they sit 10 points behind second-placed Chester as things stand.

A penalty from Joe Rowntree and Adam Malthouse’s try saw the hosts led 8-3 at half-time, with Jack Blakeney-Edwards landing three points for Dale.

Joe Graham’s score and another kick from Rowntree stretched Otley’s advantage, while Dale could only muster up a Dan Stockdale try with 13 minutes remaining.

Sedge have been struggling for form over the last couple of months and after narrowly losing to Otley last week, Matt Bebbington’s side responded in Round 18.

Matt Riley’s try gave the hosts a 7-0 lead at the break before Steve Collins pinged over a penalty to extend their advantage after the interval.

Thomas Davidson collected Hoppers’ only points from the tee in the final 10 minutes, but Sedge had the last word when Sam Lowthion scooted over to wrap up the victory.

Tynedale came from behind as they beat South Leicester in an entertaining battle at Corbridge.

Number Eight Ben Bell’s try in the final quarter of this contest proved decisive as Tyne secured the victory at Welford Road.

Thank you @SouthRfc & @TynedaleRFC for entertaining game today. Pleasure to be part of the officiating team. Great food and hospitality as always. Go well for the rest of season.

Will Cave put South ahead early on before James Neal crossed to give the hosts an 18-14 lead at the break, with David Batey and Ben Haigh going over for Tyne.

Morgan Passman scored quickly to put the visitors in front for the first time in the contest, but the excellent Ben Palmer landed a penalty to make it 21-21.

However, Haigh’s second try followed by Bell’s score ultimately sealed the win for Tyne, while Javiah Pohe clinched a losing-bonus point for South.

Stourbridge came out on top against bottom of the table Peterborough Lions after a flying start by the hosts at Stourton Park.

Both sides then exchanged scores before the break as Christian Edbrooke and Vuli Veikune both crossed for Peterborough Lions, while Joe Heatley and Hal Riley dotted down for the home side.

This set the tone for the rest of the contest as the tries went back and forth in the Midlands.

Lea, Dan Rundle and Mark Harrison added further scores for Stour while the Lions responded as Nico Deffo, Tom Lewis and William Nankivell all touched down.

The visitors did have the final say when flanker Thomas Gulland scored late on, but the Lions are now 19 points from safety with a game in hand.