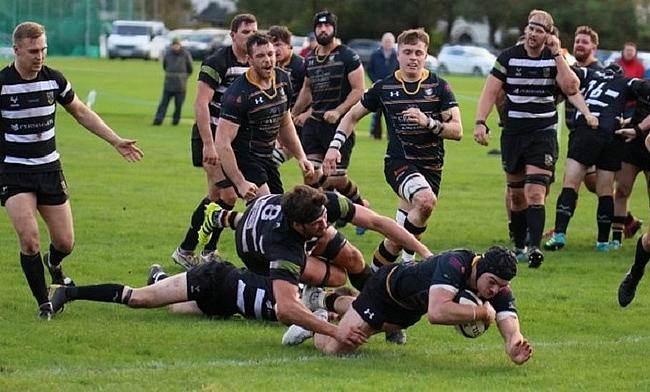 Fylde beat Luctonians away from home to maintain their position at the top of National Two North, but it wasn’t a straightforward afternoon for the league leaders. (Photo Credit: Derek Salisbury)

Warren Spragg’s side had to fight hard for their ninth win of the campaign and the bonus-point victory proved to be crucial as Caldy secured a 10th successive win.

The Wirral outfit hammered Preston Grasshoppers to stay on the toes of Fylde as the battle for top spot continues to intensify.

Third-placed Sedgley Park are just about on the coattails of the top two after a win at Hull whilst Sheffield Tigers are up to fourth following a solid display against Otley.

Elsewhere, Stourbridge beat Tynedale and Loughborough Students defeated Scunthorpe in some style whilst Hinckley left it late to clinch a win against Huddersfield and Chester saw off Wharfedale.

Fylde came away from Luctonians with an extremely hard-fought win as Warren Spragg’s side remain one point clear at the summit of National Two North.

A try from Frank Kelly on the stroke of half-time put the hosts 15-12 up, but Ashcroft and Ben Gregory both dotted down to put Fylde 24-15 ahead.

Silver pinged over another penalty to reduce the deficit, but Smith matched his opposite number to keep the visitors nine points in front.

Silver then missed the target from the tee with one-minute remaining and it proved to be costly as Lucs had to settle for a losing bonus-point when Kelly scored his second try right at the death.

Caldy maintained the continuous pressure on Fylde as they brushed aside Preston Grasshoppers at Paton Field.

The home side secured their 10th successive win of the season and they remain one point off the top with a game in hand.

Gareth Davies’ side were also down to 13-men at one stage during the second-half, but Preston could only manage three tries during the course of the afternoon with Ben Dorrington, Chris Taylor and Luke Proctor all going over.

Third-placed Sedgley Park still have Fylde and Caldy in their vision as they held on to secure a narrow win over Hull.

Sedge scored an intelligent first try as Leon Simpson latched on to Jack Metcalf’s kick through and Ollie Glasse also touched down to put the visitors 17-5 up at the break.

Ali Thompson had gone over for the home side in the first period and he scored his second try on 55 minutes to bring Hull back into the contest.

Callum McShane pinged over a drop-goal to increase Sedge’s lead to 10 points, but the hosts struck again through Harvey Harding.

However, the pendulum swung back in Sedge’s favour as Tom Ailes crashed over to score the decisive try whilst Hull were able to clinch two bonus-points late on when Charlie Beech dotted down.

Sheffield Tigers have moved back into the top four of the division after they defeated Otley in an all-Yorkshire affair.

Before the game, the hosts announced all of their matchday fees would be donated to Scunthorpe RUFC in memory of 1st XV player James Walker who sadly passed away at the start of the month.

Tigers’ Mark Ireland swapped penalties with his opposite number Ben Smith before the home side scored the first try when Jack Roberts went over.

Another Ireland penalty put the hosts 16-6 up shortly after half-time and the Tigers added their second try right at the death as Pete Swatkins darted over to seal a third home win on the bounce.

Chris Scott scored a late penalty as Stourbridge ended Tynedale’s five match unbeaten run to move up to fifth in the table.

Stour held a 10-5 lead at half-time as Callum Morris and Jack Lea both dotted down either side of Will Haydon-Wood’s effort for Tynedale.

The visitors set up a grandstand finale as with six minutes to go, Ben Blackburn dotted down, but after missing the target just after the hour, Scott kept his cool to slot a penalty right at the death to snatch a victory for Neil Mitchell’s side.

Charlie Hudson scored four of Loughborough Students’ nine tries as they overcame Scunthorpe in the Midlands.

Hudson was well assisted by his teammates as Bamidele Fadahunsi, Will Kaye, Josh Lewis, Jonathan Law and Iwan Burgwin also ran in tries for the clinical hosts.

Indiscipline was an issue for Scunthorpe and they were put to the sword in the second-half after scoring all of their points in the first period.

Will Harrison crossed for the Greens and Elliot Caunt kicked two penalties, but the search for a first win of the season rumbles on for Tim Robinson’s men.

Hinckley have moved into top half of National Two North for the first time this season as Callum Dacey’s last gasp score snatched a victory over Huddersfield.

The hosts led 17-14 after an entertaining first-half thanks to tries from Ben Pointon and Dale Bowyer, whilst Tom Wheatcroft landed a penalty.

Absolute heartbreak. Hinckley break through with the last action of the game to snatch the win. Congratulations to them and thanks for given us a pulsating encounter today, good luck for the rest of the season.

A penalty try and a score from Lewis Bradley had seen Huddersfield level things up in the opening 40 when Hinckley were reduced to 13-men, but the visitors were able to take the lead on 53 minutes as Nick Sharpe dotted down.

Alex Salt and Elliot Munnelly exchanged tries just after the hour and with eight minutes remaining, the Hornets moved ahead thanks to Oliver Ashworth’s effort.

However, this topsy-turvy affair delivered more drama. Bradley’s second looked to have won the game for Huddersfield, but with the clock in the red, Hinckley came up with the goods as Dacey’s converted effort clinched the win.

Chester sealed their second win on the bounce as they outclassed Wharfedale at Hare Lane.

The Cheshire outfit have secured victories in both of their fixtures in November and they were home and dry in this contest just after the hour.

Tries from Anthony Bingham and Alick Croft put the hosts 12-0 up at half-time, with scores by Tom Foden and Shay Owen adding to Chester’s advantage in the second period.

Wharfedale did come up with an answer in the final quarter as Henry Macnab and Josh Prell, both crossed the whitewash, but the damage had already been done.