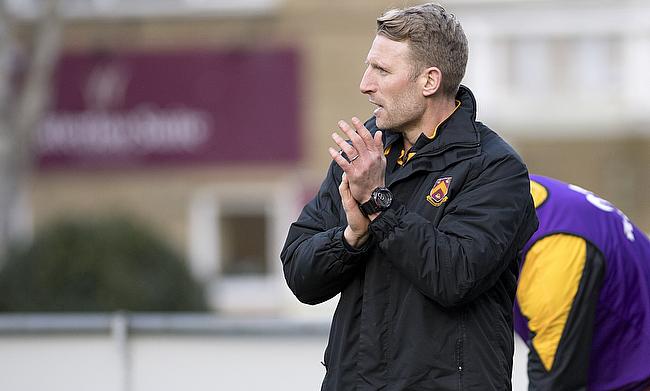 It has been some journey for Huddersfield over the last couple of years. (Photo Credit: Ray Morris)

In 2016, the Yorkshire outfit were relegated from National Two North following just seven wins all season.

The club fell into the fifth tier and had to rebuild in North Premier, but since then, Field have not looked back.

They waltzed to an immediate promotion in 2017 after winning all 26 of their league matches, and last term, Huddersfield were one of the standout teams as they finished in a very credible sixth place.

Behind their recent success is head coach Gareth Lewis – who has recently signed a new two-year contract with his hometown club – and now Huddersfield have their sights set on another promotion, but this time, from National Two North.

“I was delighted [to sign a new contract],” said Lewis

“My connection with the club goes back to the mid-90s. I played a little bit in the age grade here and then came back as a player. This is my sixth year as coach now. We have had some ups and downs along the way.

“People forget we had a relegation three years ago and that certainly made me stronger. I think we have really built on that. You learn through defeat sometimes.

“I love what I do. I’ve got immense pride. The club has got some great people behind the scenes as well so without them and the players, I wouldn’t want to continue what I am doing here because I wouldn’t be enjoying it as much.”

Lewis has every right to be enjoying himself at the moment. Huddersfield are currently on a seven-game winning streak which has kept them in the hunt for promotion to National One.

The men from Lockwood Park are also third in the table and with two games in hand to come against Wharfedale and Tynedale over the next month, you can argue Huddersfield hold the cards in this thrilling title race.

“It [the win against Hinckley] was pretty significant,” Lewis insisted. “To come away from there with a win against a side that hadn’t been beaten at home for 11 months was always going to be a tough task, but we managed to do that.

“Last year, we finished sixth and we did so well so to try and exceed that was always going to be a big challenge. There was quite a high turnover of players during the summer as well as some long-term injuries we had to deal with.

“A lot of people asked me in the off-season how we would do this year and I had absolutely no idea!

Hinckley lost at home for the first time this season to @Huddersfield_RU on Saturday. @callum_dacey5 scored twice, with Alex Salt also scoring on his return to the 1st XV and @CraigBresland scoring his first, 1st XV try. @Mr_Joe_Wilson kicked 2 cons and these are the highlights pic.twitter.com/n4Rtcfshye

“To be in this position, it is obviously fantastic and all the credit goes to the boys. They’ve been fantastic on and off the field. That’s been the key to our success so far. All we are focused on is going week to week and enjoying the rugby like we have been doing all season.”

Since experiencing a dip in form between November and December, Huddersfield have been excellent and they have only lost one of their last 10 matches.

Lewis’ side play their first game in hand against Wharfedale on Saturday and with their Yorkshire counterparts also on a good run of four straight wins, he believes Huddersfield have to remain focused.

“It is the old clichés really,” Lewis admitted. “It is about going week to week. The games in hand are there, but they are against Wharfedale and then Tynedale away. I have been in and around this league for long enough to understand that they are very tough fixtures. Things can quickly change so all we are focused on is the home game against Wharfedale.

“It is a local derby. They put 40-plus points on South Leicester last week so they are scoring points and they have got a very good set-piece.

“Their half-backs are exceptional too and they have Louis Brown from Yorkshire Carnegie at full-back so they have got talent across the team. We are fully aware of the threat they pose.”

After this weekend, Huddersfield still have to face promotion rivals Hull Ionians, Chester and Fylde in the final two months of the campaign.

Lewis stated it has been an “outstanding” season for his side thus far and admitted finishing in the top two has to be the main aspiration between now and the end of April for Huddersfield.

He concluded: “I think it is the aim! You get into a position like this so you have got to have that ambition in life.

“We have got ourselves into a position and we are going to continue to enjoy it and see where it takes us. Whether it’s top five, third, second or first, what will be will be.”