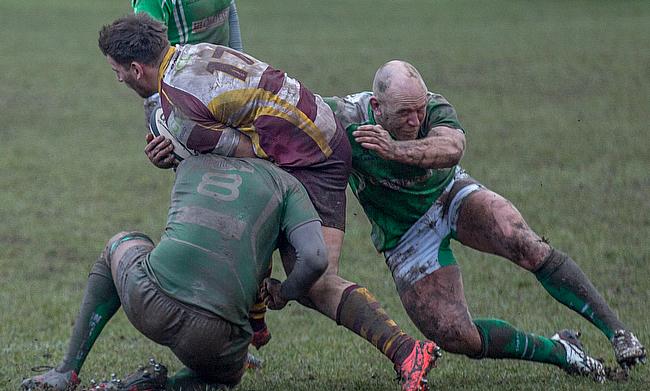 Huddersfield and Hinckley had a very successful weekend in National Two North as both sides not only picked up victories, but their rivals also dropped points.

Field defeated Leicester Lions away from home while Hinckley beat Stourbridge and their respective wins would have tasted sweeter in Round 19.

League leaders Hull Ionians fell to their fourth loss of the campaign as they were beaten by an excellent Wharfedale side and second-placed Chester suffered a defeat at Tynedale. Elsewhere, Fylde (3rd) lost to Sheffield Tigers and Otley failed to get the better of Preston Grasshoppers.

It all means Huddersfield are now just two points behind the play-off place with a game in hand, while Hinckley sit six points away from the top two.

At the wrong end of National Two North, Peterborough Lions are continuing to fight for survival after securing a vital win over South Leicester while rivals Macclesfield suffered another narrow loss – this time against Sedgley Park.

Wharfedale ground out a superb win over league leaders Hull Ionians, despite having Ken Houghton sent-off.

David Laverick gave the I’s the lead in a quiet opening before a dramatic final 13 minutes of the first half.

Houghton was red-carded, but that seemed to spark Dale into life as a brace from Dan Stockdale gave the home side a 12-5 lead.

However, Hull were to be denied a victory as Chris Walker’s try late on secured a welcome win for Dale, who are now 11 points clear of the relegation places.

Chester failed to capitalise on Hull Ionians’ defeat to Wharfedale as they lost to an impressive Tynedale side at Corbridge.

Morgan Passman’s double rocked the promotion candidates before the winger completed his hat-trick inside the first quarter.

Ben Hutton landed a penalty for Tyne, but on 57 minutes, Chester claimed their first and only points of the afternoon as Craig Ross touched down.

The home side then put the icing on the cake with a late Hutton penalty as Ben Woods’ side sealed their third victory on the spin.

Huddersfield gained ground on their fellow promotion candidates with a fourth victory in a row as they beat Leicester Lions at TMDP Park.

Gareth Lewis’ team trailed 15-14 at half-time with Max Titchener, Oliver Taylor and Sam Benjamin scoring for Leicester Lions while Lewis Workman and Mark Chivers dotted down for the visitors.

But Field hit back at the beginning of the second half to take the lead following Richard Piper’s converted try.

Taylor grabbed his second for the Lions to cut the deficit to one-point, but Huddersfield regained control when Harry Whitfield went over.

The hosts did set-up a grandstand finish when Dan Lewis struck a penalty four minutes from time, but Field held on to move to within two points of the play-off spot.

Fylde’s nine match unbeaten run came to an end in Round 19 as the promotion challengers were beaten by Sheffield Tigers.

The result for Warren Spragg’s side leaves them fourth in the table, but they are only three points behind second placed Chester.

Sam Dugdale’s try put Fylde ahead, but a penalty from Mark Ireland and a score via Ed Simmons gave the Tigers an 8-7 lead at the break.

Thomas Hart went over soon after the restart to extend the hosts’ lead and despite Adam Lewis dotting down late on for Fylde, Sheffield Tigers stood firm to secure an excellent win.

Hinckley remain undefeated at home this season as they earned a hard-fought victory over Stourbridge to keep themselves firmly in the promotion picture.

The Hornets were looking to bounce back from their narrow loss against league leaders Hull Ionians and once again at Leicester Road, they delivered.

Tries from Hough and Philip lead Hinckley to a 15 – 7 win over @StourbridgeRFC on the occasion of @Luke_Coltman ‘s 100th appearance and Jamie Skerritt’s 50th. Here are the highlights pic.twitter.com/WLvz8RpwhV

A try by Ryan Hough set them on their way and Hinckley led 12-7 at half-time with Aaron Phillip going over, while Hal Riley crossed for Stour.

The boot of Joe Wilson then ensured the victory as his second half penalty wrapped up the win for George Chuter’s side.

Preston Grasshoppers returned to winning ways in National Two North as an excellent first half helped them see off Otley at Lightfoot Green.

Hoppers flew out of the blocks as Alastair Murray scored after six minutes and the hosts added a further try through Matt Lamprey, while Thomas Davidson also kicked two penalties to give Preston a 20-10 lead at the break.

Thomas De Glanville had gone over for Otley just before half-time, but the visitors couldn’t add to their tally in the second period.

Instead, Preston were able to clinch the win eight minutes from time as Murray scooted over for his second try to seal his side’s first win in just over a month.

Macclesfield suffered another agonising defeat in National Two North as they were beaten by Sedgley Park.

Tries from Harry Blackwell, Sam Parry and Dafydd Rees did put Macc 17-14 up, with Andy Riley and Matt Riley both crossing for Sedge.

Not pretty by any means today!
We know we need to improve – but 5 points is the important thing…

Massive respect to @MaccRUFC ????
Brutal game as ever!
It just shows you the ridiculous strength of this league that Macc are second from bottom – madness… All the best

Sam Lowthian gave the visitors the lead shortly after half-time, but Macclesfield responded almost instantly as Sam Stelmaszek dived over.

However, there was to be one final twist as Lowthian scored his second and Sedge’s fourth try of the afternoon as Matt Bebbington’s side clinched back to back wins for the first time since September. As for Macc, they are now 17 points adrift of safety after this loss.

Peterborough Lions have kept their survival hopes alive thanks to a dramatic win over rivals South Leicester.

South held a 10-7 interval advantage, but Peterborough Lions were able to hit back before half-time when Sonoma Veikune barged over.

The away side extended their lead with a second penalty of the afternoon, but Veikune responded again with a fine finish.

South then retook the lead following another try which looked to have won the game for the Midlands club, but the Lions came up with the answer yet again as Tom Gulland snatched the win right at the death.

This victory for the Lions leaves them 20 points from safety with a game in hand while South are now 11 points away from climbing out of trouble.