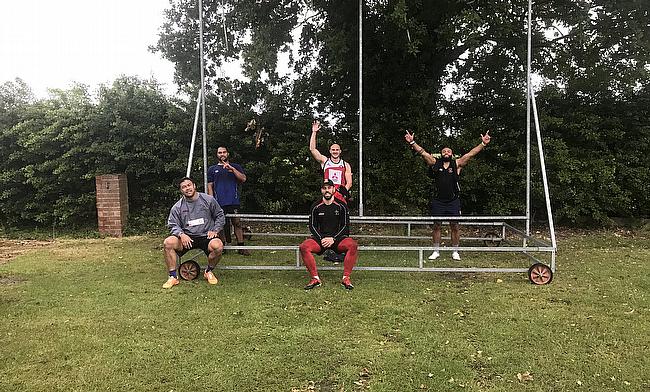 The National Two North side returned to training last week and they are combining their fitness work with raising money for the NHS amid the coronavirus pandemic.

It has been 104 days since Hull RUFC last played a competitive game of rugby.

A narrow 13-10 defeat to Sedgley Park ended a run of four straight wins, but despite falling short on the opening weekend of March, Gary Pearce’s side were experiencing a purple patch of form.

The Yorkshire club had begun their return to National Two North by picking up some excellent wins against Tynedale and Stourbridge, but as September drew to a close, their results declined dramatically and Hull tumbled towards the bottom three.

However, the men from Chanterlands Avenue turned their fortunes around with a 22-20 victory over promotion-chasing Fylde in November and that triumph acted as a catalyst for Hull to kick on.

Promoted from North Premier, Hull secured their place in #Nat2n for another year after an eighth place finish. They set their stall out early on and an excellent win over promotion chasing Fylde highlighted their intentions.

Ten wins from their last 14 games saw the Yorkshire outfit sitting in midtable, but the campaign was then curtailed due to the coronavirus pandemic.

As determined by the RFU’s ‘best record playing’ formula, Hull ended the season in eighth place and Pearce, himself, believes his side were capable of finishing higher in the division if the term had continued.

However, the 2019/20 season is now behind us and whilst there is uncertainty around when the next campaign might begin, the division will include Hull and the Yorkshire side are already preparing for a second year in National Two North.

Last Thursday, they returned to training in small groups and even though raising fitness levels has always been a key component in any pre-season, Pearce’s men are also putting in the hard yards for another important reason.

The club have set their players a challenge to virtually run to all 15 grounds in National Two North which they will be visiting next season as they aim to raise £2,000 for the NHS.

“Director of Rugby Gary [Pearce], myself, Simon Humberstone (player/coach) and Cal Donohoe (conditioning coach) all virtually sat down and said what can we sort of do to keep the boys engaged and raise some money for the NHS,” head coach Martin Webdale told ncarugby.com. “We came up with this idea of virtually running around all the clubs in the league in the time frame of four weeks.”

“The boys have brought into it really well to be honest. We did the first week last week and we did 433 kilometres out of a total of 1,150km and the boys have made good progress this week as well.”

Spilt into groups based on their position, each player has been tasked with running 15km a week in order for the club to reach their goal.

WEEK 1 ROUNDUP – as the Boys have really hit the ground running with the results as follows for week one 427 total Km covered Front row Achieved 113km Back 5 139km Half backs 64km Centres 49Km Back 3 68km This weeks winners are the front row! We are doing this for a great cause. For @NHSNEY and Our club every penny from you all will show our appreciation for the great work they do every day. Please click the link in the bio and donate https://t.co/i2hvtiP2JX

Following week one, the front-rowers led the way as they smashed their overall target of 90km by running a combined total of 113km as Hull managed to tick off seven of the 15 clubs.

After virtually visiting neighbours Hull Ionians, the players made their way into the Midlands before beginning this week at Chester.

“We obviously got to Ionians pretty quickly just down the road,” Webdale said. “Then we went across to Sheffield Tigers, down to Loughborough and then Bourneville and Stourbridge. I didn’t realise how close together those two clubs are!

“Luctonians was next and that was quite a big run for us because Luctonians seemed to be our longest away trip when we did it in the season! Since then, we got to Chester then we have gone to Fylde and across to Sedgley Park.”

Hull were one of many National League clubs to initially show their support for the NHS when the Covid-19 crisis hit and whilst their challenge does build fitness ahead of the 2020/21 campaign, Webdale admits giving something back to the community was the main drive behind the idea.

“We saw Barnes down in London lifting a load of weights and we saw that and wanted to do our bit to engage with the community as well as helping out the best we can at this time.”

Hull’s challenge will continue over the next two weeks and with lockdown restrictions gradually easing, it has allowed players to train and clock up the kilometres together whilst sticking to the social distancing guidelines.

Having not seen the majority of the squad for over three months, Webdale has been delighted to meet up with some of his players once again.

“It has been fantastic,” he added. “We have had a couple of Zoom chats as a squad, but to see each other face to face was fantastic. People lose that day-to-day, week-to-week routine so quickly and that is tough.

“I can imagine at the professional end it is a lot tougher but for us, Tuesday, Thursday, Saturday is still a large part of everyone’s week so to try and get that back as best we can is massive for the squad. It is also nice to have that social interaction and that bit of banter between everyone to see what everyone has been up to. It’s been great to see who has grown the most facial hair, who has had to shave their hair off and things like that!”

▫️ As a sports club, we know how important the #NHS is when players get injured.

▫️ We don't take the @NHS for granted and this is our way of saying thank you!

On the pitch, Webdale feels Hull could have ended 2019/20 in a positive fashion, but the overall feeling is one of satisfaction when the club reflect on their first season back in the fourth tier of English rugby.

Webdale believes the step up in physicality and quality is something Hull learnt to adapt to last term, but with the likes of Hull Ionians and Rotherham Titans dropping down from National One and Harrogate, Blaydon and Bourneville entering from level five, the head coach is more than aware that the 2020/21 National Two North season will be a challenge whenever it begins.

“For us, it will be about taking those lessons of last year and making sure as a group, that we pride ourselves on our togetherness,” Webdale said. “That mentality is huge for us as a club.

“Everyone will obviously start again from zero, but we have got to be confident in what we achieved last season that we can build on that again.

“The league will be even tougher with the quality sides coming down and we know from being in North Premier that Harrogate and Blaydon are both outstanding sides and looking at Bourneville last year, they are a really strong side too so there is going to be no easy games.

“There is always going to be that tough battle every week which the boys like. When we were in North Premier, we played really well and there were some easy games, but last season, every single game was a battle and a war and that is what the boys brought into. We expect no different next season.”