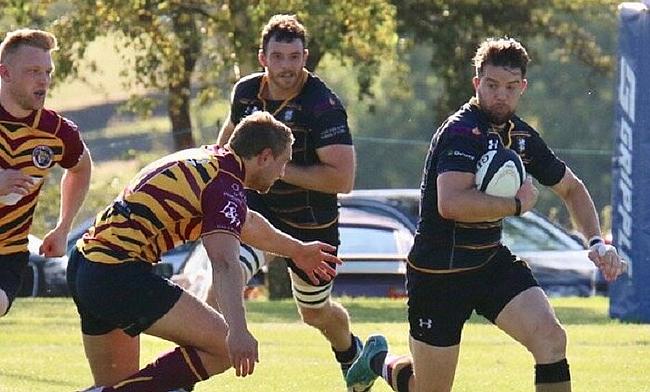 Caldy’s fine start to life back in National Two North continued as they breezed past Sheffield Tigers in Round Three. (Photo Credit: Derek Salisbury)

The Wirral outfit also moved to the summit of the division as Stourbridge’s perfect beginning to the season came to an against Hull, who remain unbeaten.

Along with Caldy, Sedgley Park are now the only other side who have won all three of their matches as Scott Barrow’s men defeated Huddersfield whilst Fylde are also yet to taste defeat after an excellent win at Wharfedale.

Elsewhere Preston Grasshoppers, Chester and Hinckley secured their first victories of the term whilst Tynedale and Otley played out another draw in National Two North.

Lewis Barker, Josiah Dickinson and Tom Sanders all crossed in the opening period for the visitors whilst 10 points from Gavin Roberts gave Caldy a 25-0 lead.

Many thank to @SheffTigersRUFC for their generous hospitality and warm welcome yesterday. Tough game of rugby. Thanks for the @CaldyRUFC travelling support too. Great performance from the whole squad @nat2rugbynorth

Barker’s second try kept the away side in complete control and Ben Jones’ effort on 71 minutes rounded off an excellent display.

The Tigers had come into this contest following two successive wins, but Pete Swatkins’ try was all the hosts could muster up as Caldy moved to the top of National Two North.

Sedgley Park maintained their winning start to the season as they secured a victory away at Huddersfield.

Will Milner and Steve Collins swapped penalties early on, but Sedge scored the first try of the afternoon through Nathan Rushton.

Collins nudged over his second penalty shortly after half-time, however, prop Alex Battye forced his way over to keep Field in touch.

This was as good as it got for the hosts, though, as Will Lees and Leon Simpson both scored to seal a third consecutive victory for the Tigers.

Fylde recorded a four-try bonus-point victory at Wharfedale to continue their unbeaten start to the season.

Dan Stockdale replied for Dale after the interval and the hosts did score on two more occasions through Ralph Wellock and Rob Baldwin while Fylde’s Greg Smith kicked his second penalty of the afternoon to complete the win for Warren Spragg’s side.

Hull secured their first victory of the campaign in Round Two against Tynedale and this week, stunned Stour to maintain their unbeaten start to life back in the fourth tier.

Latu Makaafi and Reece Dean went over for the Yorkshire outfit either side of half-time at Stourton Park.

Jack Lea and Dan Rundle did cross for the hosts, but the boot of Simon Humberstone guided Hull to victory as he kicked nine points throughout the afternoon.

Preston Grasshoppers claimed their first win of the campaign in emphatic style as they defeated Scunthorpe at Lightfoot Green.

Tries by Will Scammell and Will Robinson, either side of a score from Preston’s Alastair Murray, gave Scunthorpe and early 14-7 lead.

However Hoppers hit back as a penalty and a try from centre Nick Gregson, as well as Jordan Dorrington’s effort, gave the hosts the lead at half-time.

Sam Wallbank, Sam Stott and Tyler Spence all crossed for Preston and that appeared to kill the game off in the second period, but the visitors continued to battle as Ben McStay dotted down.

Chester came from behind to clinch their first victory of the season as they beat Loughborough Students at Hare Lane.

A first-half try from Dan Kelly plus eight points from the boot of Owen Waters gave the visitors the lead at the interval, with Alick Croft and Kyle Joseph touching down for Chester.

Matt Wilkinson drove over to extend Loughborough’s lead only for the hosts to turn this game around.

Chester scored three second-half tries, including efforts from Croft and Harrison Vare, to seal the win whilst the Students picked up a losing bonus-point following a late penalty from Waters.

Hinckley produced an excellent second-half performance against Luctonians to seal their first win of the 2018/19 campaign.

Luctonians did hold a 10-5 lead at the interval, though, thanks to Callum Young’s try and Josh Phipps’ penalty whilst Luke Coltman crossed for Hinckley.

But despite being blown away in the second 40, the Lucts did leave the Midlands with a losing bonus-point thanks to Phipps converting his late try.

Both Tynedale and Otley are still searching for their first victories of the season as they played out a thrilling draw at Corbridge.

Tyne led at 12-10 at half-times thanks to tries from Graeme Dunn and Rob Parker, whilst Otley’s points came via a Brett Mitchell score and a Ben Magee penalty.

The teams then exchanged tries after the interval as Liam Checksfield and Callum Pascoe saw their efforts cancelled out by Henry Roberts and Magge.

It was the aforementioned Roberts who gave Otley the lead with his second try of the afternoon, but once again, there was a response as Tynedale’s Parker levelled the game up.

And the sea-saw nature of the second period continued until the final whistle as Elliot Morgan’s score for Otley was matched by Ben Haigh with five minutes remaining.