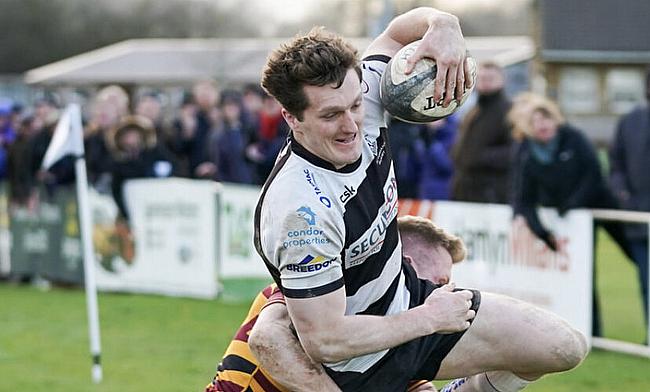 Frank Kelly has said Luctonians are not ‘feeling any pressure’ in National Two North as their fight for survival continues this weekend against rivals Hull. Photo Credit: (Nigel Mee)

Ryan Watkins’ side currently sit five points clear of the bottom three as the Herefordshire outfit aim to avoid an immediate relegation back to Midlands Premier.

Speaking to ncarugby.com before Saturday’s clash with Hull, who sit just one place and one point ahead of Lucs, Kelly admitted the men from Mortimer Park are not putting any unnecessary burdens on themselves.

“This season has been a bit of a mixed bag really, but now we are in the final 10 games of the season, all the years I have played with Luctonians, we have always played our best rugby in this period,” said Kelly.

“There’s no stress around camp. We are as happy as we can be right now. We have been in the bottom three quiet a lot, but we haven’t felt a load of pressure and now we feel like we can push up the table and finish strongly.”

Kelly has every right to aim high as Luctonians have produced a remarkable run of form over the last few months.

This Saturday we welcome @hullrugbyunion to Mortimer Park.

With only 1 point difference on the table it is set to be a great game of rugby!
So cancel all plans and let’s get down to Mortimer Park and make some noise! #luctonians

Having picked up just one win in the opening third of the season, Lucs enter the final stretch of the campaign on a run of seven victories from their last 10 matches.

Impressive triumphs over Loughborough Students, Stourbridge, Chester and Sheffield Tigers have been the standout results, but Kelly insists the side have not changed much in order to turn their fortunes around.

“A lot of the guys have been here for a few years now and a lot of them learnt about winning last year down in Midlands Premier,” added Kelly.

“I think we have now used our experiences and shown a lot more maturity over the last few weeks. We have just stuck to the gameplan and used it. Yes, we have brought in some new stuff but basically, we have applied the same stuff, but properly.

“We have been able to beat the likes of Stourbridge, Loughborough and Chester and I don’t think we had ever won against any of those teams away from home.

“Somehow, we have worked out a trick to win on 4G too! That has been massive for us and beating Stourbridge was nice with them being our local rivals.

“When we went to Loughborough, you can never underestimate how good they are. Crossy [Simon Cross], our defence coach, made sure we hit every ruck and we destroyed their ball and stopped them from playing so that was another really good result for us and our team.”

Given Luctonians’ recent form, you might have excepted the club to be further away from danger in National Two North but whilst they have sparked a revival, teams around them have also clicked into gear.

Huddersfield are beginning to generate some momentum and Hull, who are Luctonians’ opponents in Round 22, have also strung together some positive consistency.

In fact, Gary Pearce’s side have an identical recent record to Lucs having also picked up seven wins over the course of the last couple of months.

With fellow rivals Otley to come next week, Kelly is fully aware of how crucial the next two rounds of fixtures are for the Lucs and he feels back-to-back victories would be a significant statement.

He added: “Our form does give us confidence, but the only problem is, Hull have also switched it on! They have looked very good over the last couple of weeks and it is going to be a tough game on Saturday.

“We have watched a lot of their footage from the last few weeks and they are a team on the up. I don’t see them getting relegated to be honest, but if we win these next two games, I think we will be in a very, very good place never mind a good place!

“I think we can really climb the league if we win these next two, but we honestly do just focus on the next game. I know a lot of teams plan monthly and stuff, but we don’t look too far ahead.”

Kelly returned to Mortimer Park this season after a year away from Luctonians so he experienced relegation from the fourth tier back in 2017/18.

The Lucs were relegated on the final day of that campaign and the centre is hoping he can avoid a repeat of that feeling this time around.

“It would mean the world to us to stay up,” he said. “A lot of the boys are here two, three, four nights a week if they are coaching the junior section. A lot of the boys live and breathe it. I know I do.

“I came back this year after being away, but I forgot how much I missed it with all the boys. Some of the Worcester boys travel around two hours just to be at training so there is a lot of commitment so to end that by getting relegated, would be heart-breaking, but we are just taking things one game at a time.”