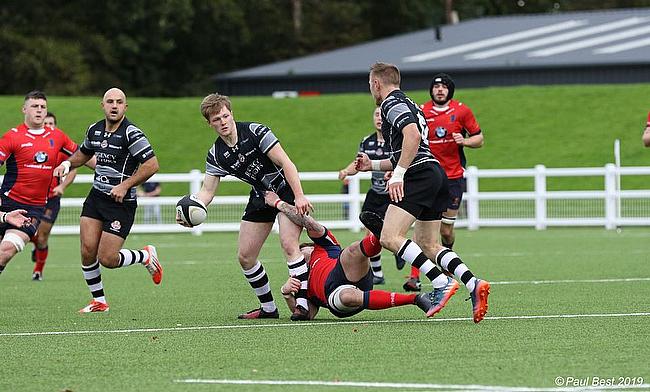 Leon Simpson has highlighted the importance of this weekend’s fixture against Fylde as Sedgley Park aim to continue their push for a top two spot. (Photo Credit: Paul Best)

The versatile back three player has been one of Sedge’s standout performers this season and Scott Barrow’s men head into Round 14 on the back of four straight wins.

Simpson has featured in all four of their recent victories, which include two excellent displays against Otley and Sheffield Tigers, and Sedge’s recent form has left them just five points behind second-placed Fylde as the two sides prepare to meet at Woodlands on Saturday.

Sedge dented Fylde’s promotion hopes in this corresponding fixture last season and for Lancashire U20 representative Simpson, he is aware of the magnitude of this occasion.

“Looking at Fylde this week, I don’t think form means anything in a game like this,” Simpson said. “It is such a big game.

“Everyone wants to win and it is the one game in the season no-one wants to lose, especially with us both being in contention at the top of the table. A lot of players at Sedge and Fylde have played for both clubs so it is massive and there is no getting away from how big of a game it is.”

Over the last few weeks, Sedge have really begun to hit their straps and their results have kept the Tigers firmly in the hunt for a top two finish, but Simpson admitted there is still room for improvement if they are to maintain a strong challenge.

“We started well and obviously we have had a couple of performances where we have lost two matches, but I don’t think we have peaked as yet,” he added. “I think we have still got a lot more to offer.

“I do think in the last two weeks we have been building to something really special. Against Otley and to come away from Sheff and not give them anything was a real win for us, but too often this season, that good rugby we have played has been in patches.

“Like I say, we still do have a lot more to offer, but it could have gone a lot worse for us with the change in coaching staff and losing a few players.”

At the beginning of the season, there was a changing of the guard at Park Lane as Matt Bebbington’s tenure came to an end and former St Helens and Glasgow Warriors man Scott Barrow took over the reins.

Simpson joined the club at the start of 2018/19 and says despite a change at the top in the summer, the transition hasn’t affected the style of Sedge’s play.

“That [style] was the first thing that drew me to go to Sedge last year,” said Simpson, who has scored five tries this season.

“I went to watch a pre-season game two years ago against Fylde and I saw how attacking they were. It just suited my game and I love it. You love to see the ball just flying around and it is enjoyable as well! You never get bored of playing.

“At the start of this season, I was bit apprehensive. I was thinking we have lost a few players and the people that have come in are quite young. I said it would be hit and miss.

“I thought we’d do really well or we would be a mid-table team so I am surprised by how well we are doing, but I am also looking at the quality of players around us and thinking we should be doing this well and we can do better. We should never have lost those two games. Really, we’re our own downfall when we lose.”

For this young Sedge side, their only setbacks have been against Tynedale and Loughborough Students this term so they will be keen to avoid a third defeat of the season when they visit Fylde on Saturday.

Sedge do have a game in hand over Fylde to come against Caldy in February so if the Tigers were to repeat April’s 28-12 victory at Woodlands, Simpson believes it would signal a serious statement of intent heading into the Christmas period.

He added: “It would be absolutely huge. It would really give us a lot of confidence going into the rest of the season. With a game in hand and playing Fylde and being five points off them, technically this could be a 10-point game for us.

“If we can get the five points against Fylde there, get some confidence going into Scunthorpe and Wharfedale before the Christmas break, it would really put us in contention to go up.

“That is what we want. At the beginning of the season, we looked at what our perfect season could look like. We aimed to challenge for promotion and not to lose a game! Obviously losing a game has gone out of the window, but we are still in contention to go up. I think we can do it. We’ve got the skills and the team and the desire to want to go up and do it. It is just about sticking to it.”