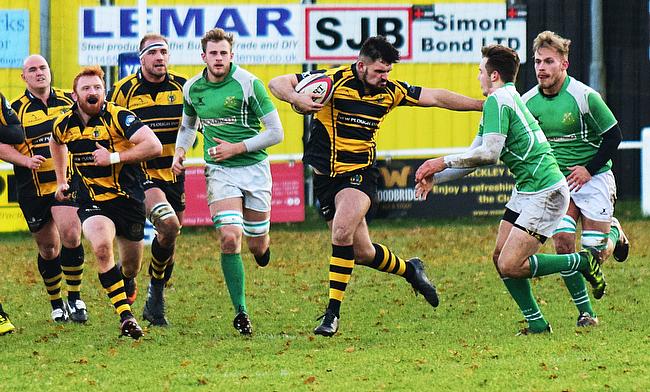 Hinckley winger Sam Driver believes his side have got the confidence to continue their excellent start to the season – but insists their mindset for every game must remain the same. Photo Credit: Steve Wells.

The Hornets head into Round Seven on top of National Two North after securing their sixth consecutive victory over South Leicester last weekend.

It has been a superb beginning to campaign for the Midlands club and as things stand, George Chuter’s men sit four points clear at the summit of the division.

Asked whether Hinckley can maintain their early season form, Driver said: “We sort of hoped we would be in and around the top of the table after doing quite well at the beginning of last season.

“We had a couple of games in the middle of the season which didn’t go our way and we unfortunately drifted off after that as other teams capitalised on our misfortune so we are more than happy with the start we have made.

“We have got the confidence to stay up there at the minute. We are playing some very good attacking rugby and our defence seems to be holding up very well too.

“We’re just focused on what we are doing rather than worrying about the abilities of other teams who are competing with us. We have a good bunch of lads who are all very supportive and together so it is going well at the moment.

“There is a good outlook and you can feel that energy. Hopefully that carries on and I guess it is down to us players to carry on performing.”

At this stage last season, Hinckley did look like possible promotion contenders, but their patchy form at the start of 2018 hampered their progress.

However, Driver feels the way his side now approach games has had a positive impact on their performances this term.

“I think the group attitude has changed and you can see that in training and turning up for games,” he added.

“We have just got that mindset of knowing how we all can play now. Last year and the year before, there were areas which we could’ve improved on and now we want to go in with the attitude that every game is a cup final.

“We are definitely in the mindset of rocking up to every game with the same mentality to play our best and win the game rather than turning up and thinking we can afford not to play as we usually do.”

Hinckley’s mindset was highlighted in recent victories over Hull Ionians and Stourbridge. The Hornets were reduced to 14-men after just 29 minutes against second placed Hull, but the Midlands club managed to seal a 35-24 win at Leicester Road.

Against Stour in Round Five, where Driver scored his first try of the season, Hinckley came from behind on two occasions to clinch the victory.

Hinckley are now 5/5 having beaten @StourbridgeRFC on Saturday – @Mr_Joe_Wilson scored for the 5th game in the row with Salt, Hough, @samueldriver93 and Dickinson also scoring. Next week, we host @SouthRfc pic.twitter.com/mQD2N8zeGb

Driver said: “Hull Ionians were a big test and it showed how well we are playing at the moment to go down to 14 men and comeback to beat them.

“Even when we went behind at times against Stourbridge and they were playing well, we have got that oomph which maybe wasn’t there a couple of seasons ago. We know we can comeback if we are behind rather than drop our heads and take our foot of the gas.”

Driver is one of a few current Hinckley players who have been associated with the team since their days in the fifth tier of English rugby.

The winger did spend a year playing in New Zealand, but returned to the Midlands under the leadership of George Chuter.

Since Chuter’s arrival at the club, Hinckley have continued on an upward trajectory following their promotion in 2016 and Driver is delighted to be able to play a part in the Hornets’ journey.

He added: “It is great to be involved with this club at the moment. I think when George came on board, we had confidence in his plans for the club.

“It is brilliant he is with us and he helps the players know where they stand as well as what we need to improve on.

“Even in these games when we put in good performances, it is not a case of sitting back and reflecting on how well everything went. We are always looking to better ourselves.

“We have actually not felt like we have put in a top performance yet all season. We have played well, but there is always room for improvement so we are only hoping to get better as a team.”

NEXT GAME ALERT – Our First XV look to take on @Hinckley_Rugby at Hare Lane this Saturday. Can Chester stop their unbeaten run? pic.twitter.com/gBdtoKdWQR

Hinckley’s next assignment is a trip to fifth placed Chester this weekend and the Cheshire outfit have won their last 10 games on home soil.

The men from Hare Lane were also one of the first teams to beat Hinckley last year, but Driver admits his side have the belief to maintain their winning run on Saturday.

“Chester are a good side and we are fully aware of that,” said Driver.

“Last year when we played Chester away, we had bad weather and you couldn’t really tell who was on whose team because of the conditions so it will be a different setting this year with their 3G pitch!

“Last season, was the game where we lost after our best run of form of the year [eight game winning streak] and I don’t think we gave them the respect they deserved.

“We have got that belief. Belief is a good word to use. We believe we are good enough and better than every team we are coming up against.

“As long as we can turn up and play like we know we can, then hopefully we can get the results.”