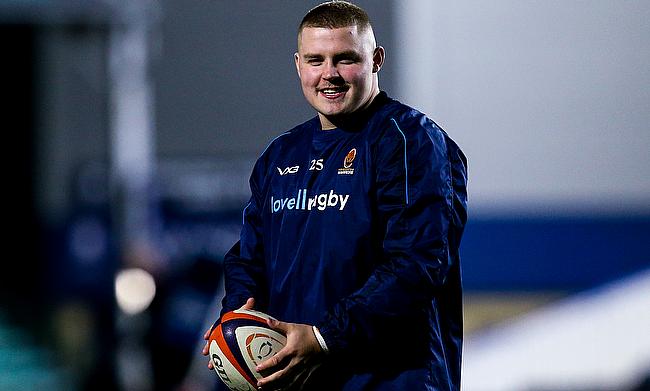 Worcester Warriors have made an encouraging start to the season – and their belief in youth and development is continuing to grow. Photo Credit: (JMP)

Lewis Holsey was delighted to finally pull on a Worcester Warriors jersey for the Cavaliers.

Advancing through the ranks at Sixways, the young prop has been with the club for the last five years after first coming to their attention at Greater Birmingham trials, however, his next step up the Warriors ladder was something he may not have imagined.

Last month, the 18-year-old was named amongst the replacements against Sale Jets but rather than Holsey trotting on to the field to pack down in his usual position, he found himself in the back-row.

“It was quite a strange one actually!” recalls Holsey. “I was called in last minute to play in the back-row. I was on loan at Stourbridge originally, but then there wasn’t space for game time there.

“Because I wasn’t playing for them that weekend, we needed a back-row cover and we didn’t have one due to a couple of injuries. I was brought on the bench as cover so my first experience of coming in was a strange one because I have never played at six before!

📋 Here's your Cavaliers team for the @premrugby Shield opener against Sale Jets at Sixways.

FREE entry for Season Ticket holders and U16s and £5 for others.

“It was still incredible to get out there to finally put on a senior Worcester shirt. I think if they had said they wanted me to play at 12, I definitely would have done!”

Holsey is one of many promising stars currently learning their trade with Worcester and he is keen to follow in the footsteps of Ted Hill and Ollie Lawrence, with the former starting against Gloucester in the Gallagher Premiership tonight.

But for Holsey, he has had to overcome some tough challenges over the last couple of years as a recurring shoulder injury put his embryonic rugby career on hold just when he was beginning to hit his stride.

He had already achieved caps for England at U16 and U18 level, whilst also featuring in every single fixture for Worcester’s U18s in 2017/18, but after his multiple setbacks Holsey admits he owes his current status to the Warriors’ belief in him.

“I was talking about my journey with my Mum the other day!” said Holsey. “I ended up playing England 18s a year early after a positive year with Worcester but last year, I had a shoulder injury in November.

“We thought it wasn’t as bad as it was and because my shoulder was feeling fine, I went back in December but I ended up doing it again 10 minutes into the first academy game.

Holsey may be ideally placed to offer advice to players his age or younger to never give up and Worcester’s faith in developing their youth also stretches beyond their academy system.

Each week, the club repeatedly promote the players who are gaining valuable game time at National League level and after returning to full fitness, Holsey is part of that process.

The 18-year-old has been loaned out to National Two North side Loughborough Students whilst fellow Warriors youngsters Cal Morris and Noah Heward are plying their trade at Stourbridge.

For any young player, being sent out on loan may be tough to take to begin with but Holsey is relishing the experience and a try in a recent fixture with Huddersfield was the perfect way to introduce himself to the lower tiers.

“Several times since I have joined [Worcester], Alan Solomons and other coaches and the owners have mentioned how they want a first team to be built from a really strong academy,” said Holsey.

“I am excited to be a part of that. They really want people who are young to succeed and kick on. Obviously, with Ollie Lawrence and Ted Hill, they are doing incredibly and let’s hope a lot more of us can do the same.

[mpu-1] “I scored a try after two minutes [against Huddersfield] or something like that! I have only really been back since mid-November. I was originally at Stourbridge, but with the props they have, there just wasn’t much of a space for game time whereas Loughborough did have a space.

“It is really good down there and I have trained with them a lot. They are a good group of lads and they are all a similar age because a lot of them are at University. It is a really good environment and I am loving it.”

Holsey admits he spoke with Warriors hooker Isaac Miller about the move to Loughborough following his time at the university.

Worcester’s faith in young players was also reaffirmed this week with Miller, 25, signing a new two-year deal as he looks to continue making in-roads into the first team.

Holsey hopes he can follow suit after experiencing the England U18 set-up which boasted current rising stars Ollie Sleightholme (Northampton) and Manu Vunipola (Saracens), but he knows there is still hard work to be done if he is to face his former age-grade teammates in the Gallagher Premiership.

Almost exactly 12 months on after our interview with the Worcester man, Isaac Miller has signed a new two year deal at Sixways 👏 https://t.co/cbzqRCut9h

“In my first year with England U18s, I was working with John Fletcher and Peter Walton,” said Holsey. “Their way of coaching was incredible. They were very hell-bent on making sure everyone is skilful and it was a really free environment which you might not get at other clubs or teams.

“It was quite sad when they were released from their positions, but when I was in there, it was incredible. You can get stressed by being in the 18s and representing your country, but they wanted to relieve the pressure. They didn’t want you to overthink things and it was about having fun and enjoying it and that is what everyone did. It was just an incredible team to be a part of.

“Now, as soon as I am ready, hopefully in the next couple of years, playing in the Premiership is definitely what I want to do. I want to be a Prem player. I just need to learn my trade a little bit more in the front-row and that comes with scrummaging against actual men rather than 18-year-old kids.

“Having been out for about a year, I just want to get used to it again. As soon as I have matured a bit, that is definitely a goal of mine.”