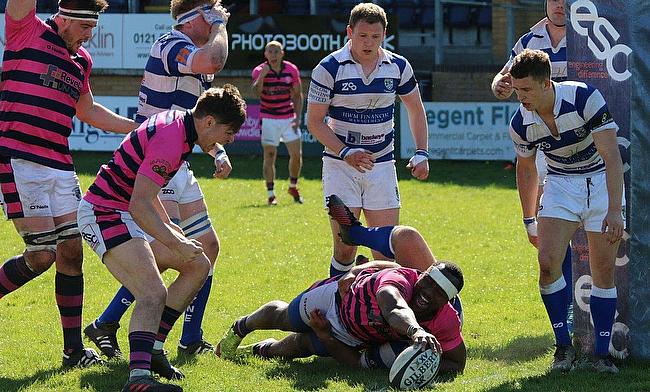 A weekend of derbies in National Two North last Saturday certainly lived up to expectations with high quality rugby on show across this division.

Rather than each local rivalry being a cagey affair, we had a mixture of action.

The likes of Tynedale, Hinckley and South Leicester were totally in control while teams such as Sedgley Park, Stourbridge and Chester had to battle to secure precious points and bragging rights.

Round Three is set to deliver once again and as followers of this division know by now, the tendency for drama is top of the agenda. Four sides are all aiming to maintain their 100 per cent starts while some are desperate to break their duck.

Tynedale’s only defeat in their last four games of National Two North rugby came on the final day of the 2016/17 season against Leicester Lions at Corbridge. Tyne won nine of their matches at home last term and have already added to that this campaign after beating Chester in front of their own supporters on the opening day of the season. Scott Lawson’s men then backed that up with a fine performance against recently relegated Blaydon to leave the northeast side top of the pile heading into Round Three.

Tyne will be fully aware that it is a marathon, not a sprint but based on the way they have started, they may fancy their chances against newly promoted Huddersfield tomorrow. The Yorkshire side have lost both of their games thus far on their return to this division, but Gareth Lewis’ men would have taken positives from their defeats against South Leicester and Hinckley. A win this weekend would be Huddersfield’s first at this level since April 2016.

Stourbridge have made the perfect start to the new season. After tailing off dramatically in the second half of the last campaign, Neil Mitchell’s side have delivered the perfect response. Stour have produced two wins over Otley and Luctonians and their next hurdle is a trip to newly promoted Sheffield tomorrow.

The hosts so nearly produced an excellent comeback to beat local rivals Sheffield Tigers last weekend, but their search for that maiden win of the season continues. The Yorkshire side narrowly lost their opening game at home against Luctonians so Adam Bryon’s are certainly showing signs of progression each week. Can they take that next step this Saturday and claim their first win in National Two North?

It has been two wins, but two contrasting wins for Hinckley. A ruthless display on the opening day against Blaydon was backed up by a calculated and professional performance against Huddersfield seven days later and next for George Chuter’s men is a Midlands derby as they host Leicester Lions tomorrow.

Hinckley have got off to a flyer as they aim to continue building in this division, but the same cannot be said for Leicester Lions. Jack Heald’s reign as Head Coach has been tough so far and it was not helped by a derby day defeat against South Leicester in Round Two. The Lions know they are capable of much better and they’ll be hoping to make amends for last weekend’s loss by claiming their first victory of the season against a local rival this Saturday.

That aforementioned victory for South Leicester made it back to back wins for Michael Holford’s men who have picked up from where they left off last term. South have actually lost just one of their last five league matches and they welcome Sedgley Park to Welford Road tomorrow, aiming to continue that excellent form.

Last season, South earned a 27-27 draw against Sedge at home, so the visitors will be out to set the record straight this weekend. Before the season began, Head Coach Matt Bebbington did not want to look past the first five games of the campaign and his methods are certainly working thus far. Bebbington’s reign at Park Lane has begun very well with wins over Sheffield Tigers and Sale FC, so Sedge will be eager to make it a trio of victories this Saturday.

Macclesfield suffered their first defeat back at this level last weekend when they were narrowly beaten by Chester at Hare Lane. Giles Heagerty’s men thought they had snatched victory right at the death, but it wasn’t to be as the Blues fell to just their fifth loss in 32 National Two North games.

Macc were relegated alongside Blaydon from National One last term, but the visitors to Priory Park on Saturday have not enjoyed their return to the fourth tier of English rugby. Ally Hogg’s men were outplayed against Hinckley in Round One and were blown away by local rivals Tynedale last Saturday so they head to Cheshire tomorrow on the back of successive defeats. Blaydon did win against Macclesfield in this corresponding fixture last term and a repeat of that result tomorrow would be huge for the Crows.

Luctonians return to Mortimer Park this weekend following a defeat against Stourbridge in Round Two. Ryan Watkins’ men were close to claiming more than just two points from their trip to the Midlands last Saturday, but a late Dan Rundle try condemned them to their first defeat of the term.

The Lucts kicked off the season with a narrow win at home against Sheffield, so they will be hoping for a more comfortable afternoon when Wharfedale visit tomorrow. Dale are yet to get off the mark this term after suffering defeats against Macclesfield and Otley, but the signs are there that James Doherty’s men can break their duck soon rather than later. Following such a tough season last year, Dale will be desperate to claim their first win of this campaign as they aim for only their second victory in 17 away matches.

After a convincing victory over Leicester Lions in Round One, Sale’s positive start to the new campaign hit a bump last weekend as they were beaten by Sedgley Park. In the context of the whole season, an early defeat against a possible promotion rival is never a good thing, but last year’s play-off finalists have the chance to respond this weekend when they host Sheffield Tigers at Heywood Road.

Sale lost just once at home last season so the task that awaits Sheffield Tigers isn’t an easy one. The Yorkshire outfit will travel to Manchester on a positive note though, after a tight derby day win over Sheffield in Round Two and they will be aiming to upset the applecart this Saturday. The Tigers have won two of their last three away matches, but their first match on their travels this term is a difficult assignment.

Both Otley and Chester opened their accounts for the new season last week with victories over Wharfedale and Macclesfield respectively. Otley are back at Cross Green tomorrow where they were so dominant last term, winning nine of their 11 matches.

The Yorkshire side did lose their first home game of this new term when they were beaten by Stourbridge so the visitors this weekend, Chester, will know they are more than capable of gaining a result tomorrow. A very good win over recently relegated Macclesfield was the perfect response for the Cheshire side following a humbling defeat away at Tynedale in Round One so Chester will be hoping for a better performance on their travels this time around.