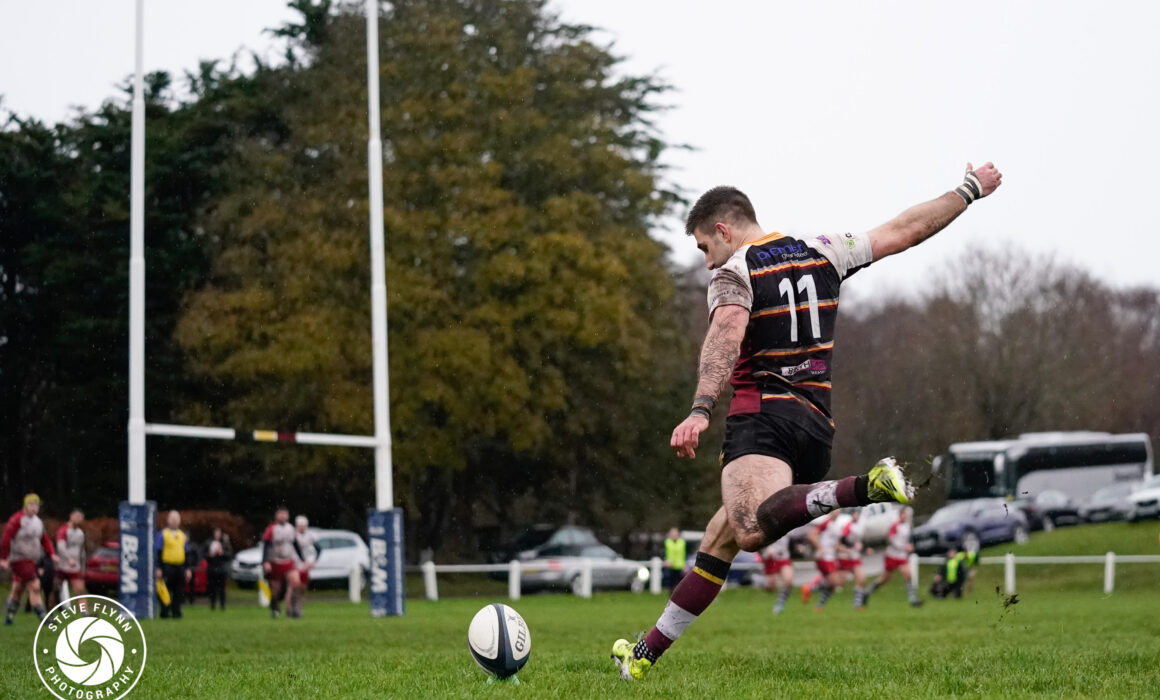 Due to the recent surge of Covid-19 cases across the country, several of Round 15’s matches have been postponed but we still have some great local derbies taking place across the weekend. (Photo Credit: Steve Flynn)

With just four games taking place in National One this weekend, it was unfortunately a straightforward choice when deciding which fixtures to focus on in Round 15.

Rosslyn Park are not in action on Saturday as their clash with Tonbridge Juddians has been postponed, so the table-toppers will not be able to bounce back from their second defeat of the season before the Christmas break.

Their setback might have dominated the National One headlines last weekend, but Sale FC’s victory over Blackheath made sure a slip up for the league leaders was punished. Jonathan Keep’s side have now won six matches on the spin and their consistent form means they are only eight points off top spot.

The North West outfit will have a seventh straight success in their sights, but they will quickly park those thoughts ahead of an interesting meeting with Caldy (4th). Sale will know maintaining their focus is key, especially against their old National Two North foes. Gareth Davies’ men have lost just one of their previous 11 games and considering the last defeat for both Sale and Caldy was against Rosslyn Park, that tells you all you need to know about how impressive these two sides have been in the first half of the season.

Despite the doom and gloom caused by Covid-19, there will undoubtedly be a warm and Christmassy atmosphere at Dockham Road when Cinderford host Birmingham Moseley. The aim for the home side is to secure a victory in order to spark their campaign back into life because after beginning the season with a flourish, Paul Morris’ men have lost four of their last five games.

🔵Hughesy returns to start and captain the side
⚪️Robins moves up to 10 with Johnson awaiting PCR results
🔵 Tom Walsh returns to the bench #OneSaleFC#SALVCAL pic.twitter.com/gQtBzMpbjZ

The Foresters now sit eight points off the top, and Birmingham Moseley will be plotting their downfall in Gloucestershire. It has been a strange month for Adam Balding’s side as due to fixture scheduling and postponements, they have actually only played one match since November 20th. That came two weeks ago against Sale FC and even though they lost 24-0, there were encouraging signs for Moseley which they can take into this weekend.

The third of four scheduled matches in tier three comes from Silver Lays as Cambridge visit Bishop’s Stortford. The away side will be hoping to build on last Saturday’s excellent home win against Rosslyn Park and Director of Rugby Richie Williams has been pleased with his team’s progress since the start of the season.

As things stand, the Blood and Sand occupy sixth spot but could move into the top four if results go their way this weekend. On Saturday, there will also be some festive cheer amongst the home ranks after Bishop’s Stortford battled to a hard-fought and welcome victory over Chinnor in Round 14. The win for Tom Coleman’s side ended a run of eight successive defeats, so can they make it back-to-back triumphs for the first time since September?

Elsewhere in National One, Taunton Titans take on Plymouth Albion with both sides keen to end the year on a high whilst Rams RFC v Chinnor and Leeds Tykes v Darlington Mowden Park have been postponed.

Hull continue to be National Two North’s surprise package, but how long can we (I) keep saying that for? Last week’s excellent win over Fylde surely means they are genuine challengers for the title this term and even though Gary Pearce’s side will say they are focused on ‘each game as it comes’, a derby day triumph over Hull Ionians would only strengthen their bid for top spot.

Before the season began, I don’t think many followers of the division would have expected The I’s to be below their city rivals heading into the festive break so with that in mind, expect no early Christmas gifts to be exchanged between these two neighbours. Their last league meeting was almost exactly seven years ago with Hull Ionians running out 29-6 winners and given their inconsistent campaign thus far, a similar outcome would be most welcome for Graham Steadman’s men.

With both Sedgley Park v Huddersfield and Rotherham Titans v Sheffield Tigers postponed, Hull can go top on Saturday with the right result and the same could apply to Stourbridge. The fourth-placed side got back on the preverbal horse at the first time of asking last week as they comfortably beat Hull Ionians to move to within three points of the league leaders with two games in hand.

"We're on a ride and we love it! We're all a bit happier and I'm not as grumpy when we are winning!"

🏙️ His side take on city rivals Hull Ionians this weekend so can they continue their excellent season?

Their opponents on Saturday, Luctonians, have found scoring tries hard to come by this month – having only crossed the whitewash on one occasion – so maybe that is top of Ryan Watkins’ Christmas list as his side prepare to welcome Stour to Mortimer Park. Based on that statistic, it will be unsurprising to hear that the Herefordshire outfit have lost their previous two matches however, they did beat possible promotion candidates Fylde in their last home outing.

They say the table does not lie in sport and in Fylde’s case, this might be true. The Lancashire club have played some outstanding rugby this term and they sit fifth in the standings ahead of the Christmas interlude. However, Chris Briers and Alex Loney’s side are 10 points off the top, which isn’t disastrous by any stretch of the imagination, but three of their four defeats this term have come against the teams above them in the standings.

That is something Fylde will want to correct if they are to be serious promotion contenders but out to stop them on Saturday are Chester. The men from Hare Lane will be in better spirits when they arrive at Woodlands after their Round 14 victory over Blaydon halted a three-game losing streak. The bad news for the visitors, though, is that Fylde haven’t lost a competitive fixture on their own patch this term, so can Chester stop that record on Saturday?

Elsewhere, Tynedale and Blaydon do battle up north whilst Bournville v Loughborough Students and Wharfdale v Harrogate have been postponed.

With an exciting match-up between Esher and Worthing Raiders disrupted by Covid-19, we begin National Two South’s preview by focusing on the side sitting in second place.

Redruth’s 15-0 victory over Dings Crusaders last weekend saw Nigel Hambly’s side rack up their fifth success from their last six games, but their failure to secure a bonus-point means they dropped to second place in the league standings. Of course, this is far from catastrophic for the Reds because given how tight the battle for top spot has been during the first half of this season, winning rugby matches has to be the number one priority.

The men from Cornwall may well take that mentality to Barnstaple in Round 15. As for the Chiefs, they fell to their sixth straight defeat against Hinckley last time out, but we shouldn’t look at their recent results and come to jump conclusions. Bryn Jenkins’ side have shown what they are capable of in spells and they will hope a complete performance is just around the corner as they target their third win of the campaign.

The early impetus which Clifton generated at the beginning of this season has undoubtedly been recaptured by Matt Salter’s side. Five successive wins has lifted the Lavender and Blacks into third place and just four points off the summit, so they will be keen to continue their impressive sequence of results against opponents they have had the better of in recent times.

Against their Bristol counterparts, Dings Crusaders have lost six of their last seven games so the men from Shaftesbury Park will be keen to improve that record on Saturday afternoon. The Crusaders’ efforts were not rewarded in Round 14 as they were unable to trouble the scoreboard at Redruth, but they did win their last game on their own patch. A repeat performance against a local rival would be the ideal way to sign off for Christmas.

There is a familiar look to proceedings in National Two South with Redruth and Clifton battling it out towards the summit, and now Henley Hawks have joined the party. The trio of sides were fighting for a top-two finish in 2019/20 and the recent form of Nigel Dudding’s side means they are once again embroiled in a promotion race.

Before last weekend, the Hawks had won six of their previous seven matches, but a defeat against an eye-catching Leicester Lions outfit stopped them in their tracks. They will want to reboot their title bid this weekend when they visit Barnes, but the hosts on Saturday are playing with confidence at the moment. The men from the capital are unbeaten in four games and come into this clash off the back of an excellent display against Old Albanian, so can they make it five without loss?