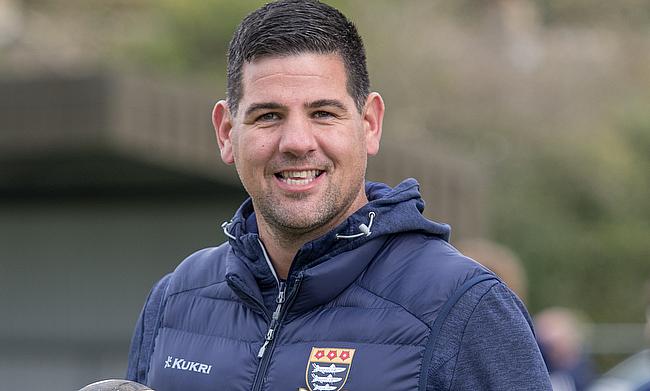 Paul Arnold already has a goal in mind for next season; to lead Preston Grasshoppers back to the National Leagues. (Photo Credit: Mike Craig)

If he can do that, it will feel like Arnold’s reign at Lightfoot Green has gone full circle after guiding Preston into the fourth tier during his first season in charge in 2017/18. Hoppers will certainly have the tools to be successful next term, but an injury-ravaged campaign this year hampered their chances of progression and it also played a major part in the club’s relegation from National Two North.

“I couldn’t have predicted our season!” says head coach Arnold.

“In August, we were looking at bettering the seventh placed-finish we achieved in 2018/19, but we have just had the most injury hit season and sometimes you are just sat scratching your head wondering if I could have done anything differently. A lot of the time, I was struggling to find the answers!

“We lost our nine, James Gough, but we expected him to be back at the end of September due to his Achilles injuries he picked up at the back end of the previous season, but they ended up getting pushed into December. Tom Davidson then needed a shoulder operation so we lost our 10. We lost Pete Altham just before the season and even when we felt we had a chance after Christmas, we lost Matt Lamprey to an abscess in his leg and PJ [Millea] to a heart attack. It was a ridiculous amount of injuries to have!

In terms of the RFU decision to complete league standings then they were left with a difficult predicament. Whatever decision they took would’ve left some clubs feeling short changed but sometimes you’ve just got to take the bigger picture into account and get behind decisions 3/

“Every team we played against, they would say we were too good to go down, but I didn’t put out the same team once this season! Coaching can be lonely so you are trying to pick everyone up around the club, but you’re sat at home with your head in your hands! We even had that 0-0 draw with Otley so it has been one hell of a crazy season!

Of course, due to the coronavirus pandemic, the National League season concluded earlier than scheduled but questions surrounding promotion and relegation still needed to be answered.

However, last Friday, the Rugby Football Union announced the final league positions for all divisions below the Gallagher Premiership and those standings were calculated based on a ‘best record playing’ formula.

With Hoppers sitting 25 points from safety when the season was initially suspended last month, Preston’s inevitable  relegation was confirmed, but for many other teams such as Otley and National One outfit, Rotherham, the decision to demote both clubs wasn’t as clear cut.

“I think no matter what they decided, you weren’t going to please everyone,” Arnold says. “You saw some leagues decide to null and void their seasons, but it is what it is now.

“We were, before the decision was made, mathematically safe so of course I wasn’t going to say ‘let’s relegate us!’ In fact, if it was null and void it would have saved us! As a Manchester United, I hope the Premier League go down that route so Liverpool don’t win the league!”

“Seriously though, no-one expected us to be where we finished this season, especially us, and I know it was out of our hands to some extent with injuries and stuff, but when you sit back and look at the squad, the ‘older’ lads are probably the ones who are quite willing to step back and allow some of the young lads to come through. In a way, it is a good time to try and build something for the next few years.”

Part of Preston’s rebuilding phase will include the expertise of Sale Sharks winger Bryon McGuigan.

We’re delighted that @mcguigan_11 is joining our coaching team for next season. Great to have you on board Byron!

The Scotland international will be lending his time to coach the backs at Lightfoot Green next season and having gained experienced with local clubs Sandbach and Bowden, Arnold is looking forward to working alongside the former Exeter Chief.

“We are bringing in Byron and that is positive for all the young lads as well, to learn off someone like him with his stature,” adds Arnold. “He is a current international with a wealth of experience. I have met him quite a few times and we talked about our rugby philosophies and we both agree about how the game should be played.

“I got on really well with him so I am looking forward to learning off him as well.  He wants to test himself a little bit higher when it comes to coaching. He has also had many different world class coaches so he is going to pick up a lot of things which I can learn off as well.

“Going forward, having someone who can help take the session with me and Donny [Sutherland] should work well. I think Bryon will help us with the finer details and he will bring something to it.”

Arnold balances his commitments with Preston alongside his role as a Community Rugby Coach for England, but his day-to-day routine has come to a halt due to the Covid-19 outbreak.

For now, he admits to playing Grand Theft Auto on the PlayStation 3 and sticking to art and PE when it comes to home schooling, but it is no surprise to hear Arnold’s positivity ahead of next season’s challenge despite the various circumstances which have led to the end of Preston’s two-year stint in National Two North.

“We have been blooding quite a lot of young lads looking ahead to next season so we have got a good young squad there that might not be ready for National Two.

“However, in North Premier, they will gain some good experience to come back the year after so finishing towards the top of that league will definitely be the aim.”