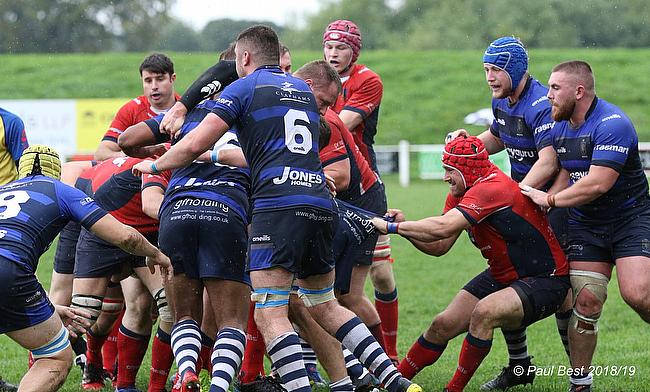 The final round of fixtures in November take place this Saturday, with the battle at the wrong end of the table grabbing the headlines.

The division’s bottom two clubs, Peterborough Lions and Macclesfield, go head-to-head this weekend and both sides will be desperate for a much-needed victory.

Peterborough Lions currently prop up the division and already find themselves 14 points adrift of safety as the third month of the season draws to a conclusion while Macc are 11 points away from climbing out of the danger zone.

Between both teams, they have managed just three wins all term so to triumph on Saturday would be a huge boost to their survival chances.

Relegation rivals South Leicester face a tough prospect in Round 12 when they host third placed Huddersfield and the visitors in that clash will be aiming to stay in touch with the leaders.

Top of the table Hull Ionians will be hoping to claim their eighth win on the spin whey they host an in-form Otley side while second placed Chester come up against Fylde.

Last weekend, we might have seen the first sign of ‘champions.’ League leaders Hull Ionians found themselves behind against a strong Sedgley Park side in Round 11, but the I’s recovered in the second-half to clinch their seventh win on the trot. Yes, there is an awful long way to go in National Two North, but the Yorkshire outfit certainly showed great resilience to stay four points clear at the summit.

Don’t forget this Saturday we have a double header at Brantingham Park. First up it’s @carnegierugby v @DoncasterKnight then it’s I’s v @OtleyRugby call 01482667342 for your early bird discount…… pic.twitter.com/JCJy32RUwO

The men Brantingham Park look unstoppable at the moment and at home, they have won their last 21 games at this level. However, they will be tested this weekend when they entertain an Otley side who are bang in form. Tom Casson and Charlie Maunder’s side are enjoying their best run of form for three years as four wins on the bounce has propelled them up to fifth place in the table. Otley are certainly enjoying themselves and they may fancy their chances of toppling the leaders in Round 12.

While Hull Ionians had to battle back against Sedgley Park, fellow promotion candidates Chester also had to fight hard to secure a victory last Saturday. Jan Van Deventer’s side were able to clinch a home win over Wharfedale in Round 11 and the Cheshire outfit remain on the coattails of the leaders as we enter the final weekend of November.

Chester are at home for the third consecutive weekend and they will be aiming to extend their incredible winning run at Hare Lane when they take on Fylde. Warren Spragg’s side come into Round 12 with a spring in their step after back to back victories against Stourbridge and South Leicester, respectively. The Lancashire club were relegated from National One at the end of last season and after a mixed start to life at this level, Fylde are now sixth in the table. Their sights will be firmly set on what is front of them and if they can become the first side to win at Chester for 11 months, then Fylde will head into December with some serious momentum behind them.

Two sides who are experiencing completely different fortunes meet at Welford Road this weekend as South Leicester host Huddersfield. The visitors to the Midlands returned to winning ways last week as a resilient defensive performance saw them claim a narrow victory over Stourbridge, which kept Huddersfield firmly in the promotion picture.

Gareth Lewis’ side are just four points behind Chester following eight victories from their last nine games while in contrast, South Leicester are desperate to taste that winning feeling again. After an encouraging start to the campaign, South now find themselves in the bottom three and three points from safety. One win from their last nine matches is why they are in the relegation places and they come into Round 12 having lost six in a row. Can South stop the rot this weekend?

Hinckley would have been massively disappointed after Round 11. George Chuter’s side had begun the month with an excellent win over Sedgley Park, but it was one step forwards and two steps back for the Hornets last week as they slipped to a defeat against Otley. The Midlands side are now seven points off the top two places and their recent form on the road has put a dent in their possible promotion ambitions.

A fantastic 27-7 bonus point win for the 1st XV this afternoon over @pborolionsrfc moves the club up to 9th in the National League 2 North table. Well done lads! pic.twitter.com/uAAtDNWkTq

However, at Leicester Road, Hinckley have won their last three matches so they will be keen to continue their form on their own patch when Preston Grasshoppers visit on Saturday. The Hoppers know all about performing well at home as three victories in a row at Lightfoot Green has propelled Paul Arnold’s men up to ninth in the table. After promotion back into National Two North at the first time of asking, the Lancashire club are now 11 points clear of the drop, but they come into this clash having lost all six of their away fixtures this term so a maiden win on the road will certainly keep the feel-good factor going at Preston.

Stourbridge and Sedgley Park were fighting for a top two spot last season, but this term, both sides have struggled for consistency which has hampered their chances of challenging for promotion this time around. Sedge come into this fixture with Stour having won just two of their last five games and last year’s runners-up have slipped down to seventh in the table.

Matt Bebbington’s side are now 11 points off second placed Chester after enduring a tough run of fixtures so they will be hoping to end a difficult month on high by claiming a victory at Stourton Park. As for the hosts, they currently occupy 10th place and so far, it has not been a November to remember for Neil Mitchell’s men. Stour come into Round 12 having lost their last three games so both teams will be keen to enter December with a positive result under their belts.

Despite seeing their three-match winning streak come to an end last Saturday, Wharfedale should still be in a positive mood following their defeat to Chester. Rob Baldwin’s men took the promotion candidates to the wire and very nearly became the first side to beat Chester at Hare Lane since December 2017.

A bonus-point from their trip to Cheshire kept the Greens in the top half, but they will be hoping to bounce back with an immediate victory when they host Sheffield Tigers in Round 12. The fellow Yorkshire outfit arrive at the Avenue following an 18-18 draw with Leicester Lions, but they would have been frustrated not to have won at TMDP Park last week. A red-card allowed the Lions back into the game, but nevertheless, the Tigers do enter this fixture having not lost in November. Jamie Broadley’s side sit eight points clear of danger and a third game without defeat would be a great way to end the month.

Tynedale picked up their first away victory of the season in Round 11 as they defeated Macclesfield at Priory Park. The win in Cheshire moved Ben Woods’ side eight points clear of the relegation places and in truth, Tyne’s recent form has really sparked their season into life. Four wins from their last seven matches has seen the North-East club start to distance themselves from danger and three of those aforementioned victories have come at Corbridge.

Tyne will be aiming for a fourth straight triumph at home when Leicester Lions visit this weekend, but the Midlands club will have other ideas. Andy Key’s side battled to a draw against Sheffield Tigers last Saturday and the result did halt a run of successive defeats for the Lions. Now just three points above the drop zone, a victory over a side just ahead of them in the table would be an ideal result for Leicester before the festive fixtures begin.

The division’s bottom two sides meet in the East of England this weekend as Peterborough Lions and Macclesfield do battle for what could prove to be a potentially vital victory. Macc arrive at Bretton Woods 11 points from safety and their home defeat to Tynedale was a significant setback in their fight to avoid the drop.

The Cheshire outfit have won just one of their last five games, but their hosts are also really struggling for form. Peterborough Lions currently prop up the division and they are 14 points adrift of safety as we conclude the third month of the campaign. The Lions, who were promoted into this division in April, have picked up just one victory all term and they come into this fixture having lost their last five games. Both sides will be desperate for the win on Saturday because a defeat would be a fatal blow to their survival chances.