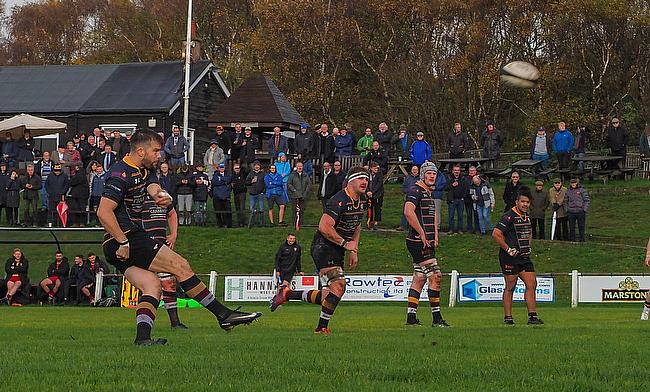 As Caldy approach their 21st fixture of a remarkable campaign, Director of Rugby Gareth Davies is aware his club are in the National League spotlight. Photo Credit: (Gareth Lyons)

Twelve miles up the road, another team are also grabbing the headlines, admittedly on a much larger scale.

Liverpool Football Club are seemingly marching towards their first Premier League title for 30 years having won 24 of their 25 matches and despite Caldy’s unbeaten run of 20 games being part of a completely different sporting landscape, there are parallels between Jurgen Klopp’s stars and Davies’ charges.

“I’ve said I am not really sure where to go this year!” Davies tells ncarugby.com. “There is still along way to go, but I am an avid Liverpool fan and if they go without losing and we go without losing, I am pretty sure I can retire! I am not sure it gets any better.”

Liverpool have drawn just one game this season, which is where Caldy have the upper hand. The Wirral outfit have not only gone unbeaten this term, but they have also won all 20 of their matches in National Two North – one of only two teams to hold a perfect record in the top four tiers of English rugby.

Last weekend, Caldy continued their relentless pursuit of an immediate return to National One with a 31-12 victory over Otley and the club also boasts the best scoring and defensive statistics across all three National Leagues.

“At the time, we kind of felt we could have done better against Otley but if you watch the videos back, they were a really good and abrasive team,” says Davies. “That is what I have found since we have come back into National Two is that there are not any weak teams in the league and everybody can beat everybody.

“We did some good things last weekend and to be honest, we have probably had two of our hardest games in the last two weeks against Hull at home and against Otley.”

Caldy’s recent win in Yorkshire saw them open up a 17-point lead – with a game in hand – over second place Fylde and after suffering the heartache of relegation from National One on the final day of last season, an instant return to the third tier now seems inevitable.

Earlier in the campaign, Caldy back-row JJ Dickinson did not shy away from suggesting the Wirral club should be plying their trade in National One and it seems as though the No.8 will be proven right come the end of April.

Dickinson, along with a large majority of Caldy’s squad, stuck together after their relegation and Davies believes keeping a core group of players at the club has been vital in their success thus far.

“We didn’t really lose anyone,” adds Davies.  “It hasn’t been massively different. We are an experienced team and I know that has different ramifications going forward in terms of replacing them, but we have got a real strong team and some good lads coming through who I know will be able to make the squad a bit stronger next year if we are in National One.”

Whilst there might not have been a major upheaval in terms of player personnel, there were tweaks in the coaching set-up at the beginning of the campaign following the departure of Simon Verbickas.

Matt Cairns was brought in as head coach and the former Saracens and Harlequins man has been assisted by Andrew Souter and Richard Vasey.

“We had a new coaching structure at the start of the season and that had a big impact so I think it was getting used to that, but the lads have all bought into it,” Davies continues.

Consistency is the key #ravers #raiders

“We have got the first and the second team playing the same way and neither team has actually lost a game!

“We have had some new lads in who have made a difference, but I put this season down to the coaches we have got. We have got five or six really good coaches and they all think the same way.

“They all have different skills as well and are better at different things than others, but the combinations work really well. This hasn’t happened overnight. This has happened pre-National One last time.”

Caldy did earn promotion to National One in 2017 and during that season, they won 28 out of 30 matches.

The men from Paton Field are on course to better that outstanding record this term, but their potential ‘invincible’ tag will be tested over the next three weeks.

This Saturday, they host Sedgley Park – who are the only side to beat Caldy in their last 50 National Two North fixtures – before being reacquainted with the Tigers at the end of February to fulfil their game in hand.

Sandwiched in-between is a trip to second-placed Fylde so by the conclusion of this month, the race for promotion will become a lot clearer.

“When we had the game called off against Sedgley earlier in the year and that fixture got put after the Fylde one, we knew that this could be a deciding point for the league so I think everyone has been looking ahead to these three weeks,” Davies says.

“I think everyone does like these hard games, though. They are three big derbies, however, amongst the coaches, it is just another game for us. We have done normal prep and I think the other thing is, we don’t want the players to get too excited or over the top and lose their heads during the game. We have been as we have been for every game and preparing as well as we can.

“There are still 10 games to go. Like with Otley last week, there are teams really fighting in this league so we have to be focused. After the second Sedge game, we play Huddersfield who have already beaten Fylde at home so it is definitely not done and I don’t think it will be done at the end of this month.”

Similarly to Klopp and Liverpool, Davies is keen for his side not to look too far ahead as they aim for the big prize, but in truth if Caldy do navigated their way through February unscathed, a league title would be in touching distance.