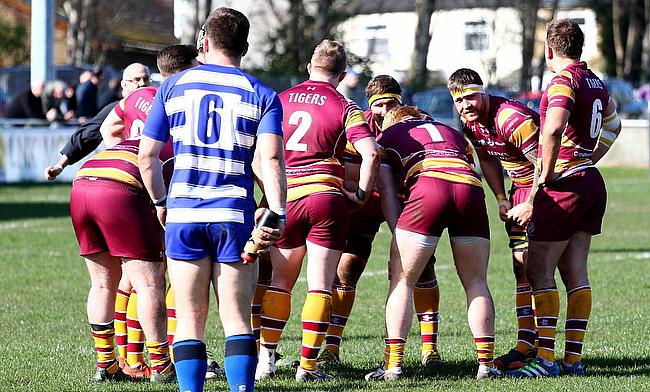 Sale FC enhanced their promotion ambitions in National Two North as they went to the summit of the division following victory over Sheffield.

Jonathan Keep’s side moved to the top of the pile following their 10th straight victory, but also because original league leaders Hinckley were beaten by Sedgley Park.

The men from Heywood Road are only in pole position on ‘Points Difference’, but they do have a game in hand over second placed Hinckley.

Stourbridge are just two points off the promotion spots after sealing their fourth straight win while Tynedale and the aforementioned Sedge are very much in the hunt after their victories.

Meanwhile, Otley, Luctonians and Macclesfield all picked up vital wins in their fight to avoid relegation while South Leicester got the better of Sheffield Tigers.

Sale FC moved to the top of National Two North following an easy bonus-point win over Sheffield at Abbeydale Road.

Jake Barron, Arron Reed and Adam Aigbokhae crossed for first-half tries to put Sale 19-0 ahead at the interval.

Long way to go but this has a very nice feel about it https://t.co/ZsMRmcOABK

The hosts scored two quick fire tries during the second period, but they were simply blown away by Sale who have now won 10 games on the spin.

Sedgley Park recovered from a slow start to secure a hard-fought win at Leicester Road and knock Hinckley off the summit of National Two North.

Hinckley fly-half Tom Wheatcroft ran in the opening try and a penalty from Joe Wilson plus a drop goal from Wheatcroft put the hosts 13-12 up at half-time.

Sedge crossed twice in the first period and it was first blood to Matt Bebbington’s side after the break as they went over for their third try of the afternoon.

Wilson’s second penalty kept Hinckley in touch, but a bonus-point try for the visitors gave them a 10-point advantage.

Hinckley rallied in the final five minutes as Gareth Turner’s try gave them hope that they could preserve their unbeaten home record, but Sedge held on to leave them five points outside the top two with a game in hand.

Stourbridge secured their fourth win on the bounce as they sealed victory against Wharfedale to move to within two points of leaders Sale FC.

The hosts were 10-7 behind at the break following Tom Mann’s early converted try and Tom Barrett’s penalty while Nick Murphy crossed for Stour.

However, the home side built pressure and responded as Jack Lea fed Nick David to score.

Lea and Josh Trinham both touched down either side of a Barrett penalty to put Stour in control before Oli Cicognini got a consolation try.

But it was Stour who had the final say as a penalty from David wrapped up the win for Neil Mitchell’s side.

Tynedale returned to winning ways by clinching a bonus-point victory over Leicester Lions at Corbridge.

Winger Guy Pike scored two tries for the victors, who bounced back from their defeat to Huddersfield in Round 17.

Sheffield Tigers’ search for their first win since November goes on after South Leicester emerged victorious from a tight battle at Welford Road.

Following penalties from Rickie Aley and Mark Ireland, South Leicester scored the first try of the afternoon but Jamie Broadley’s score put the Tigers 13-10 in front before another Aley penalty levelled things up on the stroke of half-time.

Both sides exchanged penalties after the restart and it was the accuracy from the tee for South that guided them home as two more kicks sealed victory.

Macclesfield extended their winning run to three matches under interim coach Marshall Gadd as they clinched an impressive victory over Huddersfield.

The visitors went in front via Harry Davey’s penalty, but James Hampson’s try just before half-time made it 5-3 to Macc.

Tom Morton’s penalty and try from Toby Twigg extended Macclesfield’s lead before Huddersfield got themselves back into this contest via an Austen Thompson try.

A score from Ryan Parkinson dashed Field’s hopes of gaining a result, but they did secure a losing bonus-point as Adam Malthouse barged his way over.

Luctonians ended a 10-game losing streak as they picked up a vital victory against Chester to move to within a point of safety in National Two North.

A tight first half was edged by Lucts as they led 10-0 at the interval after Sam Boxhall’s penalty and a try from Frank Kelly.

Ryan Watkins’ side upped their game in the second period as Seb Robinson-Hall grabbed a brace to ultimately clinch a welcome win for Luctonians.

Kyle Joseph did cross for a consolation score for Chester, but the damage had already been done.

Dominant Otley claimed a crucial win over Blaydon to move them six points clear of the relegation places while the Crows are now just a point above the drop zone.

However, the hosts took control after half-time as they were awarded a penalty try before Joe Rowntree landed three penalties to seal Otley’s third win from their last four matches.