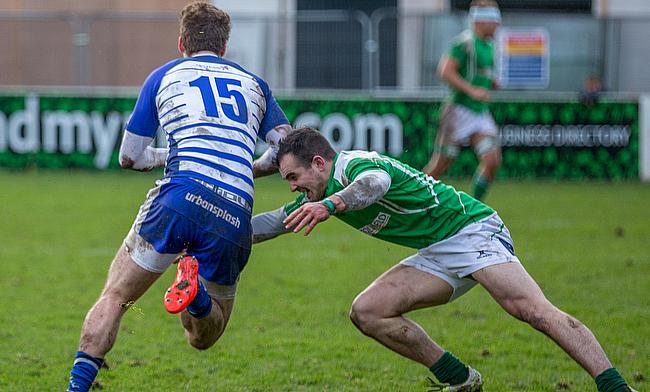 Sale FC secured their sixteenth consecutive victory of the National Two North season as they beat Stourbridge to edge closer to promotion.

The league leaders swept their promotion rivals aside to move eight points clear at the summit and there are no signs that their run will be coming to halt anytime soon.

Defeat for Stourbridge saw them drop out of the top two as Sedgley Park thrashed Chester whilst there were contrasting fortunes for the chasing Hinckley and Tynedale.

Hinckley’s ambitions for a play-off spot suffered a blow following a defeat at home to Otley, but Tynedale are still firmly in the mix for a second placed finish after a commanding victory over Macclesfield.

At the wrong end of the table, Wharfedale picked up a crucial victory in their fight for survival as they beat Sheffield Tigers and the win was made even sweeter as strugglers Luctonians, Sheffield and Blaydon all lost.

Sale FC have taken a huge step towards the National Two North title as they clinched their 16th successive victory against promotion rivals Stourbridge at Heywood Road.

Joe Kelly’s score put the hosts ahead before Stourbridge were reduced to 14-men as their forward was shown a straight red-card.

The bonus point win over 2nd place @StourbridgeRFC and the defeat of 3rd place @Hinckley_Rugby by @OtleyRugby puts us in a commanding position with just 7 games to go #onesalefc #topdogs https://t.co/ZsMRmcOABK

Chris Johnson landed a penalty for a 10-0 lead, which was added to by Jake Barron and Adam Aigbokhae who both went over in the first period.

Stour were much improved after the break, but a further score from Chris Mayor sealed the bonus-point win for Sale which now leaves them eight points clear at the summit with seven games in their season to go.

Sedgley Park are up to second in the National Two North table after a superb bonus-point win over Chester.

Sedge flew out of the traps as Jamie Harrison’s score set the tone for the afternoon before the hosts raced into a 40-0 lead in the first period.

Andy Riley was one of the scorers in the opening 40 as was Ashley Platt-Hughes who went on to complete his hat-trick after half-time as Matt Bebbington’s men cruised to victory at Park Lane.

The Tigers are now two points clear of third placed Stourbridge with a game in hand.

Otley clinched a crucial win over Hinckley thanks to a brace from flanker Tom O’Donnell.

After Hinckley had taken the lead through a Callum Dacey try in the Midlands, a penalty from Joe Rowntree plus O’Donnell’s first score gave Otley the lead at half-time.

Joe Wilson levelled the game up from the tee five minutes after the restart, but O’Donnell’s second try of the game set Otley in their way to a valuable win.

Hinckley set up a tense finish after they had crossed from a rolling maul, but Otley held on for the victory which leaves them eight points clear of the relegation places whilst Hinckley’s top two ambitions suffered another hit.

Tynedale secured back to back wins for the first time since December as they scored five tries in a bonus-point win over Macclesfield.

James Spencer and Will Miller scored to help Tynedale lead 14-7 at half-time.

Brendan Berry and Charlie Reed touched down for Macc in either half, but Spencer, Ben Wilkinson and Jake Rodgers crossed to ensure a comfortable Tynedale victory which leaves them three points behind second placed Sedgley Park.

South Leicester halted a run of six straight defeats as they battled to victory over Luctonians at Welford Road.

Louis Silver opened the scoring for the away side, but two tries gave South a 12-10 lead at the break.

The Lucts then went 17-12 up as Piers Morell added to Josh Watkins’ first half try, but a penalty try and a bonus-point score for the hosts put them in control of this contest.

Silver landed a late penalty to clinch a losing bonus-point for Luctonians, but they remain bottom of the division and 12 points from safety with nine games in their season to go.

Huddersfield returned to winning ways in style after a bonus-point win over relegation threatened Sheffield at Lockwood Park.

A try from Tom Owen helped Huddersfield lead 11-7 at half-time, with Gareth Morley replying for Sheffield.

However, the hosts were rampant after the break as Brandon Conway, Ben Morrill, Fran Entressengle and Adam Malthouse all touched down.

Blaydon’s bid for survival suffered a setback in Round 25 as they were beaten by Leicester Lions in the Midlands.

The Crows pushed their hosts all the way, but couldn’t find their cutting edge late on as the Lions held on for the win.

Leicester led 12-5 at the break after Owen Taylor and Tom Aviss had both crossed, with Matt Thompson replying for Blaydon.

Both sides exchanged penalties after the interval, but some resolute defending from Leicester Lions saw them home.

Wharfedale’s hopes of avoiding relegation from National Two North have been boosted after victory over fellow Yorkshire outfit Sheffield Tigers.

Dale edged the first period thanks to Oli Cicognini’s early try and Tom Barrett’s penalty before the fly-half landed another kick and a drop-goal in the second half to secure the win.

The men from the Avenue are now three points clear of the drop zone with seven games in their season remaining.