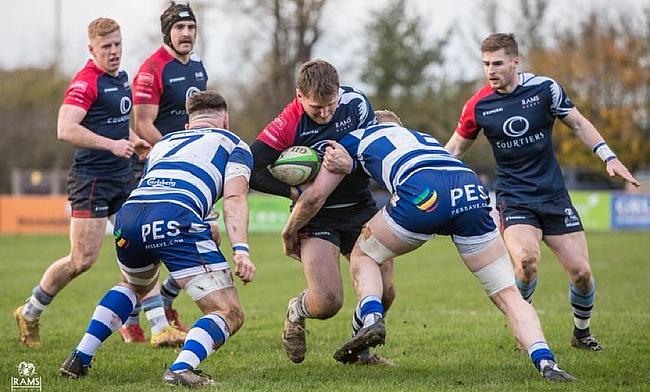 Rams RFC’s pristine run of form came to an end in Round 12 while Huddersfield, North Walsham and Barnstaple all picked up excellent victories. Photo Credit: (Paul Clark)

The league leaders entered Round 12 on a run of 11 successive bonus point wins and were ahead at the break in this contest after an entertaining first 40 minutes.

A brace from Anthony Marris helped the hosts into a 14-12 lead – with Tom Walsh and Tom Curtis going over for Sale – but it was the visitors from the North West who were on the board next as Longmore dotted down shortly after the interval.

Jak Rossiter responded just after the hour but a penalty from Curtis saw Sale hold a one-point advantage. With eight minutes remaining, Ben Henderson’s try nudged Rams back in front but this nip-and-tuck game had one final twist as Longmore burrowed over for his second score.

Rams had the chance to snatch the win at the death but Will Partington’s penalty was off target meaning the table-toppers tasted defeat for the first time this term.

For the second successive season, we are delighted to announce National League Rugby will be live-streaming the derby day clash between Rams RFC and Chinnor 🙌

Sale have moved up to second and they are now five points off the summit after this victory while Cambridge (3rd) couldn’t take advantage of Rams’ defeat as Leeds Tykes came back from 17-3 down to draw with the Blood and Sand.

Switching to the other end of the table, that result for the Yorkshire outfit leaves them three points from safety after Taunton Titans were comprehensively beaten 52-0 by Rosslyn Park (4th).

There were even better fortunes for Chinnor as their 29-15 away win at Hull means they are now four points above the drop. The Black and Whites  – who on Friday unveiled former England international Nick Easter as their new Director of Rugby – secured their third victory of the season with hooker Charlie Robinson at the double.

Defeat for Hull leaves them rooted to the foot of the division and 14 points from safety while Esher’s quest to climb out of trouble suffered a setback in Round 12 as they lost 38-30 to Bishop’s Stortford at Silver Leys.

Elsewhere, an inspired performance by Matt Minogue helped Darlington Mowden Park to an impressive 33-15 win over Cinderford and Birmingham Moseley stretched their unbeaten run to three matches with a 35-14 victory over Plymouth Albion.

Huddersfield ran in five tries to earn the result of their season so far as they beat Tynedale 38-14 at Lockwood Park.

Gareth Lewis’ side have been battling towards the wrong end of the table for large parts of this term but just their third victory of the campaign means they are now five points clear of the bottom two.

Harrogate (13th) still have Huddersfield in their sights after fighting back to earn a losing bonus point against an in-form Hull Ionians side. Martyn Wood’s men were 19 points down heading into the final quarter but tries from Tom Baxter and Tom Spencer-Jones saw them depart Brantingham Park with something of note.

Bottom of the table Blaydon draw 22-22 with relegation rivals Preston Grasshoppers thanks to Charles Smith’s try six minutes from time. The game ebbed and flowed at Crowtrees but in the end, both had to settle for a share of the spoils. The result for Hoppers means they are six points clear of the drop while Blaydon are eight points from safety.

At the top, Sedgley Park are now the only unbeaten team left across the whole of National League Rugby after they made it 12 wins on the spin following a 47-17 victory against Sheffield, hooker Cashel Chilvers scoring a hat-trick.

Fylde remain in touch with the table-toppers after beating Sheffield Tigers 20-11, fourth-placed Otley made it six victories in a row as Clark Wells’ late try saw them edge past Wharfedale 28-27 and Oli Parker’s superb score helped Rotherham Titans to a welcome 26-21 success against Chester in The National League Rugby Review Show’s Key Game.

North Walsham’s hopes of digging themselves out of the relegation places received a major boost in Round 12 thanks to a 47-24 bonus-point victory over Sevenoaks.

Sam Porter, Aidon Higgins, Ben Adams and Tom Morris went over for Sevenoaks who were unable to build on their impressive victory against Henley Hawks.

Canterbury’s 34-17 defeat to Guernsey Raiders also allowed North Walsham to close the gap while Rochford’s 33-22 loss against the aforementioned Henley also helped their cause.

Ryan Crowley scored a brace for the Hawks but Blackheath flyer Jake Lloyd went one better for the league leaders as his hat-trick guided ‘Club’ to an impressive 36-5 win against fellow promotion challengers Barnes.

James Shanahan’s troops are now six points clear at the summit as we enter the halfway stage of the season and Old Albanian are their closest rivals after they came back from 17-0 down to beat Bury St Edmunds 26-22 at Woollams.

Third-placed Dorking lost some ground in the title race as they saw a 19-7 lead vanish against Tonbridge Juddians (6th). Their 12-point advantage dissolved in the final 14 minutes as Peter Dankert’s side completed a fabulous comeback at The Slade.

Elsewhere, Worthing Raiders (5th) secured their third victory on the bounce as they ran in 11 tries to comfortably beat bottom of the table Westcliff 69-15.

Barnstaple fly-half Tyler Gordon-Oke kicked a last-gasp penalty to give the Chiefs a precious 36-33 victory in an enthralling contest against Loughborough Students.

Jonathon Kelly’s brace – either side of Dan Johnson’s effort – helped the hosts into a 19-7 half-time lead before Jonathan Mason and Johnathon Carter swapped scores.

The Students were able to wipe out Barnstaple’s advantage and they levelled things up when Tom Hoyt and George Barber crossed to set up a fascinating final 20 minutes in Devon.

Matt Gohl and Seb Smith exchanged tries to keep things on a knife-edge before Gordon-Oke landed the winning penalty to secure a win which lifts Barnstaple out of the bottom two.

Bournville have dropped into the relegation places but are level on points with Barnstaple after earning a try bonus-point from their 52-36 defeat away at Exeter University while Hornets are just three points above the drop following a 30-25 loss to Old Redcliffians.

At the summit of National Two West, with league leaders Leicester Lions not in action, second-placed Clifton were able to close the gap to one point after coming away from Redruth with an excellent 44-18 victory.

The Lavender and Blacks produced a very good second-half display to keep the pressure on the table-toppers and Hinckley are also right in the mix after an eye-catching 31-20 win against fellow promotion candidates Dings Crusaders.

This result for the Midlands club leaves them five points off the top while the only other game in the division saw Luctonians return to winning ways at the first time of asking as they defeated Newport (Salop) 27-5.