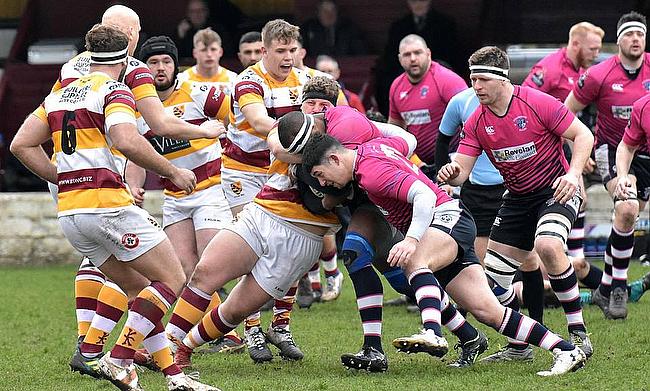 It is still early days in the National One season, but two of the current bottom three clubs clash in Round Six and both will be keen to spark their respective campaigns into life. (Photo Credit: Chris Farrow)

Cambridge welcome Canterbury to Volac Park this weekend and Richie Williams’ side will be keen to secure their second victory of the campaign following three straight defeats. As for the visitors, Andy Pratt’s men have lost all five of their matches this term so they will be hoping their first ever National One win occurs on Saturday.

At the right end of the division, table toppers Richmond will be targeting a sixth consecutive victory when they travel to Bishop’s Stortford whilst second-placed Rosslyn Park entertain Plymouth Albion as they look to keep pace with the league leaders.

Elsewhere, Rams RFC will be looking to continue their solid start to life in National One when they face a winless Hull Ionians whilst an in-form Blackheath go to Sale FC and Darlington Mowden Park take on Rotherham Titans.

Bishop’s Stortford and Richmond are having contrasting seasons as we enter Round Six with the latter enjoying a more fruitful campaign thus far. Steve Hill’s side have a four-point lead at the top of National One after securing their fifth win on the spin against Rams RFC last weekend.

It was another excellent kicking display by Rob Kirby in game 151 ??????

The visitors will be hopeful of maintaining their winning record at Bishop’s Stortford, but something that can be guaranteed at Silver Leys is entertainment. Stortford have been involved in some extremely tight, high-scoring games in recent weeks but frustratingly for Andy Long’s men, they have found themselves on the wrong side of the result on three of the last four occasions. Stortford haven’t secured a victory since the opening day so toppling the league leaders would be the perfect result to return to winning ways.

Rosslyn Park would have been disappointed to suffer their first defeat of the season against Blackheath in Round Four, but Kieran Power’s side produced a strong second half showing at Sale FC to bounce back last weekend. They are now up to second in National One, but with Richmond beginning to open up a gap at the top, Park will be keen to avoid a second home loss in a row on Saturday.

Travelling to the Rock in Round Six are Plymouth Albion who come into this fixture after a battling win over Canterbury. Ben Gulliver’s side were reduced to 14-men and sustained two injuries in the first half at Brickfields, but showed immense character to claim consecutive victories on their own turf. Albion will now be eager to translate their positive results into their away form as they go in search of their first win on the road.

Following their defeat to Rams RFC in Round Two, Birmingham Moseley haven’t looked back. Three straight wins for Adam Balding’s side as lifted them to third in the league standings and after five rounds in National One, Moseley are looking in good shape.

However, they will be tested this weekend when they visit Old Elthamians. Last year’s runners-up are slowly clicking into gear and back-to-back wins over Plymouth Albion and Cambridge was the perfect response after a home defeat to Rosslyn Park. Gavin Lach’s men are ninth in the table, but only five points behind Moseley, so if they do harbour a potential title challenge this season, a win at College Meadow on Saturday would keep them involved with the early frontrunners.

For the third time this season, Cinderford were able to snatch a late win. Paul Morris’ side had already rescued victories against Plymouth Albion and Cambridge and last weekend was no different. The Foresters battled back to triumph over Darlington Mowden Park so the fourth-placed side may well be hoping for a less dramatic afternoon when they entertain Chinnor.

The visitors to Dockham Road also clinched a late victory in Round Five as Chinnor edged past Bishop’s Stortford to secure back-to-back home wins. The Black and Whites will now be searching for their second victory on the road against their old foes and Chinnor did win this corresponding fixture 26-21 last year so they will be hoping lightning strikes twice in Gloucestershire this weekend.

Two promoted clubs clash this weekend in National One as Rams RFC take on Hull Ionians and it is safe to say both sides have experienced different fortunes so far. The hosts have been performing well above expectations as they currently occupy fifth spot in the table. Seb Reynolds’ side did suffer their first loss of the season last weekend against Richmond, but four wins from their first five games is a superb return.

This is Rams’ first ever campaign in National One whilst Hull Ionians made an immediate return to this level thanks to their title winning season in National Two North. However, it has not been the ideal start to life back in the third tier as the Yorkshire club have lost all five of their matches and have failed to pick up a single point so far. The I’s are 10 points from the safety positions already so a victory in Round Six would be most welcome for Mike Umaga’s side.

The last month has been particularly pleasing for Blackheath. Three wins from their last four matches suggest ‘Club’ have really found their groove in recent weeks and their performances against Rosslyn Park and Hull Ionians have highlighted what James Shanahan’s side are capable of.

Blackheath continue to be one of the stronger sides in National One and they will be hoping to maintain their good form when they visit Sale FC in Round Six. Jonathan Keep’s side had ended September with successive wins which seemed to kick-start their season and for the first-half against Rosslyn Park last weekend, they were very much in the contest. However, Sale had no answer to their opponents in the second period so they will be after a quick response on their home patch this weekend.

Darlington Mowden Park will be hoping for a straightforward afternoon on Saturday after experiencing late drama last weekend. Not for the first time this season, Danny Brown’s side saw a potential victory snatched away from them with Cinderford being the culprits on this occasion.

It was a third straight home loss for DMP, but they travel to Yorkshire this weekend having won both of their away matches this term. On the flip side, Rotherham Titans’ victories this season have come on their own patch so something has got to give at Clifton Lane. Martin Jenkinson’s men performed well in the first half at Birmingham Moseley in Round Five, but couldn’t build on their advantage so the Titans will be eager to make it hat-trick of home victories on Saturday.

Cambridge’s frustrating season continued in Round Five as they were beaten by Old Elthamians. Richie Williams’ side had led at the break, but the Blood and Sand couldn’t hold on to their advantage as they slipped to their fourth defeat of the campaign.

Another frustrating afternoon at home for @camrufc as @ElthamiansRFC earn a deserved win. It just feels that they have to place greater trust in themselves and what they are capable of achieving.https://t.co/GhoQpgGkjC

They now find themselves in the bottom three, but their wait for their second victory of the term may come to an end when they travel to fellow strugglers Canterbury. The City Men will be hoping their maiden win in National One occurs sooner rather than later to give the club a much-needed boost. A tough start in terms of fixtures hasn’t favoured Andy Pratt’s newly-promoted side, but they will be targeting this home clash with Cambridge as they look to end a run of five straight defeats.