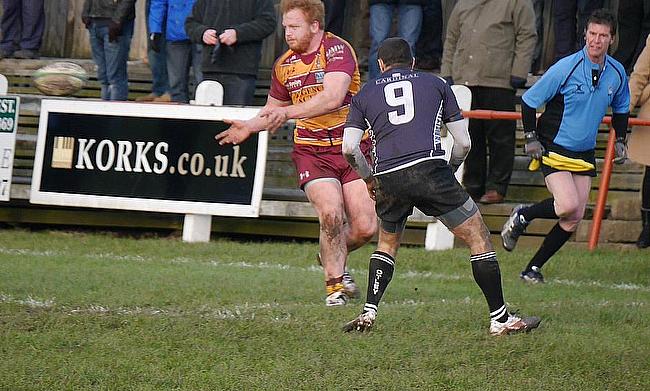 Caldy, Sale FC and Sedgley Park got 2017 off to a winning start in National Two North to maintain their promotion ambitions.

Caldy eased past Scunthorpe at home whilst Sale had to battle hard away at Tynedale and Sedgley Park marked Max Ashcroft’s 100th appearance for the club with an excellent win at Otley.

It wasn’t just the top three that began the New Year on the front foot as Stourbridge, Leicester Lions, South Leicester and Chester all secured victories as the top seven cemented their positions in the table.

With that in mind, the bottom three all suffered defeats in the opening round of fixtures in 2017 while elsewhere, Hinckley pulled off a superb fightback to beat Wharfedale.

Caldy maintained their nine point lead at the top of National Two North and extended their unbeaten run to 16 matches as they beat Scunthorpe at Paton Fields.

The game was over by half-time after a brace of tries from Nick Royle and Forbes Edwards while fly-half Jack Lavin accumulated 11 points.

Royle completed his hat-trick in the second-half to round-off an emphatic win for the table toppers.

Sale’s Jack Moorhouse went over for the opening try before Sam Stelmaszek and Tom Davenport swiftly followed to get the away side off to a blistering start.

Dan Taylor and Oli Walker responded for the hosts before the break to move Tyne to within five points of Sale, but McGovern landed a penalty to extend their lead.

The visitors were never behind despite a Penalty Try for Tyne at the start of the second-half. Sale continued to stay in front thanks to a score from Adam Aigbokhae, but the hosts were refusing to roll over as Joe Mills replied almost instantly.

However, Chris Townsend’s try just after the hour sealed the game for the Manchester-based side who continue their promotion push.

Sedgley Park kicked off 2017 by ending Otley’s 100 per cent home record as they secured a win at Cross Green.

Before the start of play, the hosts had won all seven of their matches on home soil, but Sedgley Park’s seven tries put a halt to that.

The visitors led 19-5 at half-time before Dean Schofield’s men went through the gears in the second 40 to clinch their 11th victory of the season and only their third win on the road.

This triumph means Sedge are still four points behind Sale FC whilst Otley have dropped to 10th in the table.

A try from Dan Rundle and a touchdown for Rod Petty earned Stour their fourth win on the spin, with Luke White contributing 10 points with the boot.

James Broadley (2) and Will Bennett crossed for the Tigers with Liam Wallace adding one conversion.

Leicester Lions battled to a comfortable victory over the Luctonians to keep themselves firmly in the promotion hunt.

Henry Monkley scored late on for the Lucts after Leicester’s Matt Tuckey was yellow-carded for a high tackle.

South Leicester wriggled off the hook with an impressive third quarter to deny Harrogate their first away victory of the season.

A try from David Doherty as well as seven points from the boot of debutant Sam Fox gave ‘Gate a 10-9 lead at half-time, Rickie Aley replying from the tee for South.

Will Cave sliced through the Harrogate defence to give the hosts the lead in the second period and soon after, Aley landed his third penalty of the afternoon.

Harrogate then piled the pressure on South and they were rewarded when, on his 100th appearance for the club, Noel Minikin scored a fine try for the visitors to put them to within four points of the home side.

The Yorkshire outfit continued to press for the last 10 minutes of this encounter, but South managed to hold out for a narrow victory.

Chester got 2017 off to a victorious start as they arrested a five game winless to beat Preston Grasshoppers at Lightfoot Green.

Colin Campbell and Kyle Joseph scored-first half tries whilst Liam Gill and Craig Ross crossed in the second period to secure the bonus-point for the visitors.

Back-row Will Lees and Billy Woof scored Preston’s only tries with Lewis Allen landing one conversion.

Joe Glover slotted over a last-minute penalty as Hinckley edged out Wharfedale in a thrilling contest at Leicester Road.

Alex Salt, Alex Crocker and Glen Murray touched down for Chris Campbell’s side in the first-half to give them a 21-15 lead at the break.

Josh Prell and Dan Stockdale crossed for Wharfedale in the first period whilst Jamie Guy kicked five points and it was the away side that went ahead just after half-time.

Murray had been sin-binned for Hinckley following Stockdale’s try and with the hosts down to 14 men at the beginning of the second period, Dale capitalised as Scott Jordan dotted down.

Wharfedale had the better of the second 40 and looked like they had secured the victory when Jordan grabbed his second try of the afternoon seven minutes from the end, but Hinckley began their comeback.

Glover converted his late try to move Hinckley to within a point of Dale before keeping his cool to land a penalty in the dying ambers of this match to snatch the win.