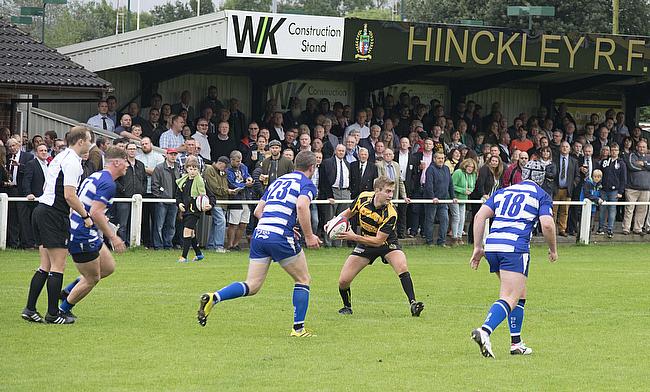 Last year’s top sides all produced comprehensive wins on the opening day of National Two North, but it was Hinckley that secured the result of the weekend.

The drama has already returned.

Five months on from of a pulsating National Two North season, the first day of a fresh campaign delivered excitement.

At full-time, the scores filtered in. Last year’s play-off finalists Sale FC and not let their defeat affect them as a return to Heywood Road saw them produce an emphatic display against possible promotion rivals Leicester Lions.

Matthew Bebbington’s Sedgley Park also got over their first hurdle as did Tynedale, South Leicester, Stourbridge and also the returning Macclesfield.

But while the aforementioned sides all accomplished an opening day win, Blaydon’s first game back in National Two North didn’t have a similar outcome. Ally Hogg’s men were relegated from National One in April and they were given a rude awakening on their return to this level as they were outplayed by Hinckley at Leicester Road.

Granted, it is only one result and Blaydon will certainly respond to this, but it highlights the strength of this division. Elsewhere on Saturday, new boys Sheffield were on the wrong side of a 32-31 result which was the scoreline that helped them clinch their promotion back in May.

Sale FC got off to a wonderful start in National Two North thanks to a bonus-point victory against Leicester Lions at Heywood Road.

Two scores from winger Ciaran Connolly and a try on debut for Aaron Reed helped Sale to a 19-3 lead at half-time.

Christian Taylor (2) and Jack Barron added further scores as the hosts sealed the perfect result after play-off heartache back in May.

Matt Bebbington’s reign as Sedgley Park Head Coach got off to a winning started as they brushed aside Sheffield Tigers at Dore Moor.

Perfect lineouts allowed Dan Maher to score twice on his debut for Sedge in the first period before Tom Bedlow added a third without reply to give the away side a 19-0 lead at the interval.

Sedge added second-half tries through Andy Riley, Sam Lowithon and Jamie Harrison to wrap up the win, while Alex Graham scored a late consolation for the home side.

Tynedale eased to a comfortable eight-try victory over a determined Chester at Tyndale Park on Saturday.

Two penalties from Chester kept them in touch with their hosts, but two further tries from Scott Lawson’s men gave them a 28-9 half-time lead.

Both sides exchanged two tries apiece after the break before Tyne crossed for their eighth score of the afternoon with the final play of the game.

Macclesfield made a winning start on their return to National Two North after an excellent second-half display enabled them to see off Wharfedale.

Dale, who were hit by injuries last season, were very much in this contest and deservedly went ahead through Toms Asejevs.

But, Macc hit back before the break as David Marwick and Lewis Barker crossed and from there, Giles Heagerty’s men didn’t look back.

Ryan Parkinson dotted down after the restart and despite Jack Barnard giving Dale a glimmer of hope, tries from Barker and Parkinson again completed the win for the Blues.

A three-try blitz in the opening 20 minutes laid the foundations for the victory with Jack Dickinson, Callum Dacey and Gareth Turner all crossing after Jonathan Haynes’ opener.

Salt went over shortly after half-time, but Blaydon brought some respectability to the scoreline as Ryan Foreman, Haynes and Dan Marshall all touched down for Ally Hogg’s side.

But it was Hinckley who rightly had the final say as Josh Smith completed the rout two minutes from time.

Stourbridge put their poor second-half of last season behind them as they kicked off the new campaign with a comfortable bonus-point win at Cross Green.

Stour made an electric start to the game, scoring after just four minutes through full back Joe Heatley.

The away side kept on the front through the boot of Chris Scott who gave them a 13-0 lead at half-time.

George Morgan, Niall Gibbon and Nigel Mukarati added further tries after the break and although Otley mounted a revival thanks to scores from Joe Graham and Henry Roberts, Mukarati and Heatley wrapped up the victory for Neil Mitchell’s side.

Huddersfield’s 26 match unbeaten run was ended on their return to National Two North as South Leicester began the new season with a bonus-point win.

Gareth Lewis’ men hadn’t lost since April 2016, but on their return to the fourth tier, they were edged out by their Midlands hosts.

A brace from Myles Bean as well as some excellent kicking from Rickie Aley put South one point ahead at half-time after Huddersfield scores from Will Milner and Tom Owen.

Will Cave extend South‘s lead straight after the break, while Aley continued to be accurate with the boot.

However, his efforts weren’t enough to keep his side ahead as Huddersfield levelled the scores on 66 minutes through Nick Sharpe, Lewis Bradley and Lewis Workman.

Aley then nudged his side back in front, but the visitors went ahead thanks to Sam Nunns’ effort. Their lead lasted just two minutes as Aley once again knocked over three points and then produced a fine cross-field kick for Cave to clinch his second try and the win for South.

Rupert Broadley added two further tries for the hosts who went into half-time with a 24-19 lead, with the Lucts scoring via Loz Breese, Piers Morrall and a penalty try.

The ebb and flow of this game continued into the second period as Silver landed a penalty before the visitors went ahead in the match for the first time thanks to a Will Hodnett try.

Back came Sheffield through Wood just after the hour, but a penalty from Silver six minutes from the end saw them leave Yorkshire with the spoils.