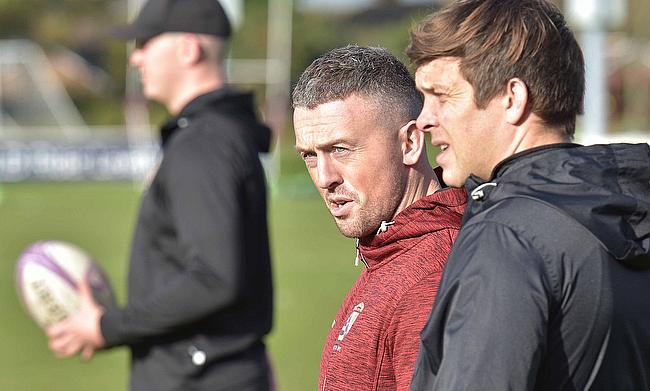 At the beginning of January, Warren Spragg was appointed as Sale Sharks’ 1st XV Kicking Coach meaning his tenure as Fylde’s boss has come to an end. Photo Credit: (Chris Farrow)

Spragg made over a century of appearances for the current National Two North side before becoming the club’s head coach ahead of the 2017-18 campaign.

The 38-year-old admitted it was a “strange feeling leaving Fylde” after a nine-year affiliation with the Lancashire outfit but along the way, he was able to create some memories which he will never forget.

ncarugby.com caught up with Warren to run through some of his highlights….

Going back to Fylde kickstarted my coaching journey

I think this was the eye-opener for me in terms of how I wanted to coach and just getting a different feel of enjoyment for the game. I was 29 and I had been professional abroad for the past six years before coming back to Fylde. When I started back there, Nelly [Mark Nelson] and Brian Ashton looked after the group.

The way that they did things at Fylde then was completely different to anything we had done. It was like ‘we don’t kick the ball, we score tries from everywhere!’ The ambition was to win every game by scoring four tries. We wanted to be the most skilful team around, so we trained completely differently to everyone else.

We used to challenge ourselves in game scenarios to develop our skills, so it was a fantastic experience for me to play with that freedom and think about the game differently.

That was probably my first step into my coaching journey. We know rugby is great, but why couldn’t it be better? That feeling of enjoyment and reward of doing things a little bit differently was great. It felt like we had a ‘one-up’ on the people we played against who were just training and doing the same as others were. It was really inspirational and if I had not gone to Fylde, maybe it wouldn’t have kickstarted my coaching ambition the same way it did.

The bus and train journeys!

Something like COVID-19 has made me realise what has gone out of the game.

There is a lot of talk about regionalising rugby and shortening up the travel because players apparently don’t want to be on the bus for four hours after the game and of course, you can accept that.

Thank you to everyone who has made my time at @fylderugby a happy and rewarding one, and to @AllanFoster48 for providing the most detailed previews and background pieces in world rugby! Can’t wait to get back and support @lono29 & @CDJB13 and the boys as a fan! #runitfylde https://t.co/UYZ9rvc7mQ

For me, I do disagree with it! Part of the charm of National League rugby is the camaraderie you get and it is built up by the grind of a 30-game season and being on the bus back from Plymouth Albion for example.

There are trips like that when you have been on the bus for four hours and you have still got another four to go!  At that point, the lads have already had far too many beers and actually, the memories that you make and the fun that you have on those long away trips is incredible and they will stay with you for a long time. You also keep the stories close to your chest!

The development of those around you

This has been incredibly rewarding. There have been quite a few different people that have been involved with parts of the coaching journey I had at Fylde. Seeing those guys being part of our team, growing up and getting better and moving on in different walks of life, is great to see.

The most recent ones are obviously Lono [Alex Loney] and Briersy [Chris Briers] who can step into the head coach role. I can step away and think because of the experience they have had working together over the past few years, I am sure they will do a great job.

We had Dan Orwin who was our second team coach when I first started at Fylde. We’d push him and challenge him quite a lot to improve and get better. He had been around some of the other local clubs like Fleetwood and actually seeing Dan come into a club like Fylde and realise that ambition is rewarding because he has gone to coach at county level, North U18s and now he is flying high as a lecturer at UCLAN. He is a head coach in his own right back at Fleetwood now which is great.

Within the players, to see lads come in like Connor Wilkinson, Tom Carleton and Nick Ashcroft, they have developed into great players and great ambassadors for the club. People like Ben Gregory too. Ben’s only club has been Fylde and he is in there as club captain for hopefully a long time to come so being part of other people’s growth and development is something I feel fortunate to have done.

Those games in December, that Christmas weekend of the 22nd/23rd, have been against Preston for the past two seasons and that has been one of the real strengths of National League rugby. In 18/19, we beat Preston at Fylde and collected the five points.

There were photographs of the game which captured the day really well! The Vandals [Fylde’s 4th XV] were blind drunk and dressed as Santa Claus and the place had probably 2,000-3,000 people there. 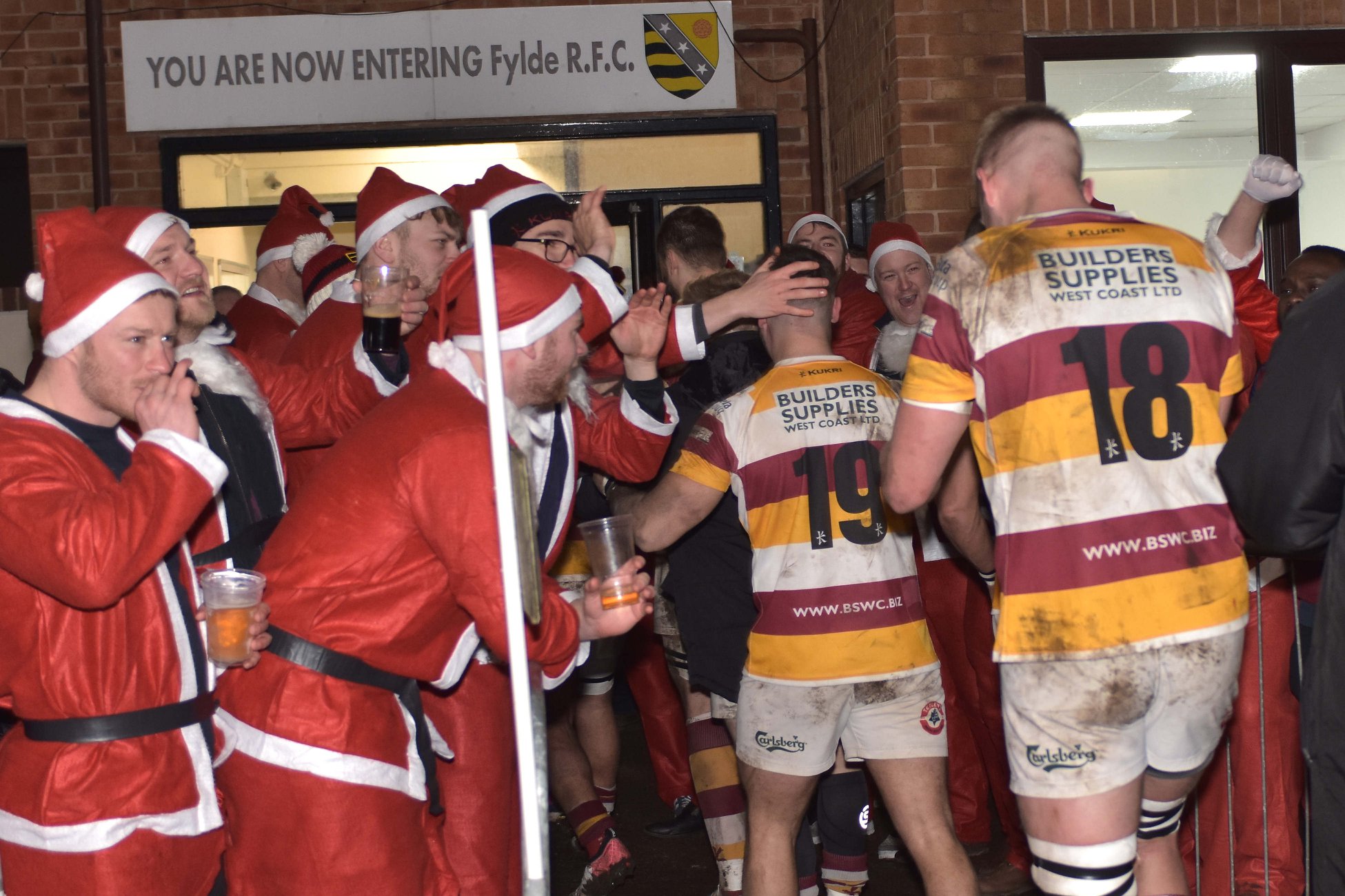 The whole day is a ‘Made in Lancashire’ experience that everyone who was a part of it will remember. I am sure the Preston lads will remember it and hate it. They will relish they were part of the experience, but it is something they would’ve hated and they will take that forward and use it as motivation for the coming years when the teams are at the same level again.

I was involved with two fixtures against Preston at Christmas and we got five points from both games so going to their place and getting a result has to be up there as well.

I can call Fylde home

I grew up around the corner from Aldwinians in Manchester. I started playing there when I was five-years-old and I was always ambitious and I always wanted to be the best I possibly could. I think when you move into professional rugby as a player, you just want to make it so part of that ‘making it’ is someone who is picked every week and being someone that everyone wants to see at the club.

I think you spend a lot of time as a player searching for that. Am I at home here? Am I accepted? Do people want me to be here? As a player, I sort of got there on a few occasions. When I was over in Padova [Petrarca Rugby] for four years, I felt a good connection with the club and its people.

That was my last place before I went back to Fylde, but the eight years I have been at Fylde as a player, as an assistant coach, as a head coach means it has become that place where you actually properly feel like you are part of the club.

Although we have not won anything in terms of any massive success, I think we have pulled many parts of the club closer during a difficult time and I think I will always call Fylde home now. I will genuinely look forward to going back to Fylde on the weekend and sharing a pint with anybody at the club. I can go and just watch, enjoy and support the team and feel like it is my club even though I am not going to be there as a player or a coach. I think that is what most people want out of rugby.

To see some of the messages coming in was flattering, but I think for the club, they are now excited to crack on. It is a group of boys that I care about and I hope they have a positive future.