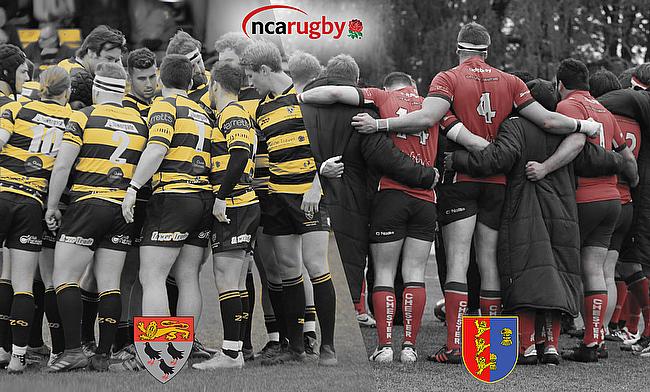 Chris Heal previews the 2018/19 National Two Play-Off as Canterbury take on Chester for a place in National One.

The last time a side from National Two North sealed promotion to National One via the play-off was in 2015.

Against Bishop’s Stortford, Ampthill and District advanced into the third tier, but since then, the south have ruled the roost.

Old Albanian, Old Elthamians and Chinnor have all experienced elation and Canterbury will be hoping to become the next side from National Two South to taste play-off success.

However, Chester will be tasked with stopping the City Men in Kent on Saturday afternoon as they aim to become the first northern side ever to win a National Two play-off away from home.

Added to this, both sides are taking a step into the unknown as an historic promotion is now within touching distance. It doesn’t get much bigger for Canterbury and Chester this weekend so who will march on to National One?

Just before Christmas, ncarugby.com conducted an interview with Canterbury Head of Rugby Andy Pratt and he was defiant. The club sat on the cusp of the top two and a 23-18 defeat to Tonbridge Juddians had just halted their excellent start to the season.

He wanted his players to remain focused as the battle for a promotion place began to heat up and the City Men proved to be a formidable force in the second half of the campaign.

Canterbury did lose out to Dings Crusaders in January, but 11 successive wins guided them to the National Two play-off and confidence will be high heading into an historic weekend.

“In our last interview, we spoke about the previous two seasons where we had started pretty well and tailed off a bit post-Christmas,” Pratt said.

“It was key for us to maintain our good start and push through the horrible months. I was really pleased because that was the big question for us. We did slip up a couple of times, but after the defeat to Dings, we grabbed the opportunity and the strength of the squad has pushed us on.”

The message is clear for Canterbury's Andy Pratt…

He wants his side to remain focused heading into the New Year as the promotion race continues in #Nat2s.https://t.co/XqYzI8hgFo

Pratt also talked about the belief his side have shown throughout the season as they prepare to grace the play-off stage and he alluded to two decisive moments during Canterbury’s campaign.

“We have always thought we could get into the top five,” added Pratt. “There are a couple of things that were tipping points for us this year. Believe it or not, Guernsey away was a big moment. We were losing going into the final 10 minutes or so and we pulled it out the bag.

“A couple of weeks later, we then got the result down at Henley [Hawks] and suddenly the boys got that belief which is just so crucial and that propelled us forward.”

Results indicate Canterbury have not felt the pressure of chasing a play-off place over the last four months. They finished the campaign with 121 points to their name and they racked up 24 victories along the way.

In fact, Canterbury have lost just one of their last 17 games on their own patch and that defeat occurred last weekend against National Two South champions Rams RFC.

The City Men did make a few changes ahead of their clash with Chester so expect a Canterbury outfit full of energy and intensity to take to the field on Saturday. They will also surely relish this play-off challenge in front of a packed Marine Travel Ground.

But, Pratt was keen to stress it was more about the opportunity than overthinking the occasion, especially when you look back at play-off history which has favoured sides from the south in six of the last eight years.

“Of course, we wanted to win against Rams and we did make changes,” admitted Pratt. “I had lots of advice during the week from putting the second team out to ‘you must play the strongest 15!’ It was a difficult balance, but I think we got it right.

It was another day of hard work from our team preparing for the playoff game. Thanks to Maypole Marquee Ltd for getting everything ready. We now have extra marquee space for bars. The work continues today. Keep you messages coming using #CanterburyPlayoffs pic.twitter.com/AgeG3NHsXx

“The bedrock of what we have done is our home form and it will be vital. Everyone is talking about what normally happens in the play-off. I am a bit nervous about that because records are there to be broken!

“In many ways, physiologically, it is good for us to have played Rams because it just keeps our feet on the ground and keeps us humble. Just turning up at home, doesn’t always get us the result so we will be reminding the lads of that.”

There is no doubt Canterbury will embrace the occasion on Saturday and as their Twitter feed has pointed out over the last few weeks, thus play-off is the biggest game in the club’s 90-year history.

Pratt has been able to guide this team from consistent mid-table finishes to the edge of National One. They may have already surpassed expectations, but they are also ready to write their latest chapter.

“Promotion would be mean a lot not only to the lads, but for the whole club,” Pratt added. “I played back in the time we got to this level for National Two. It was like we had landed on the moon!”

“It is this little club and we are going beyond. I have also said to a lot of people when we were doing well that it would be great to have a play-off because it is a big day for the club that people will remember. I am delighted we have got it.

Whilst history points to a Canterbury victory on Saturday afternoon, there should be no sense of trepidation for Chester when they make the long journey to Kent.

It was a whirlwind season in National Two North in terms of the race for a top two finish and it was Jan van Deventer’s side who emerged with the play-off spot.

They accumulated 21 wins throughout the campaign and ended the term on 109 points, just four behind eventual champions Hull Ionians. Victories over the I’s as well as the likes of Sedgley Park, Huddersfield and Fylde show the quality Chester possess so why can’t they shift the balance of power back to the north this weekend?

“It has been an exceptional season,” van Deventer told ncarugby.com. “We set a target of where we wanted to finish and that was in the top four. Towards the back-end of the season, our aims changed as the top two slots were well within our grasp and even the top place.

“We refocused our goal and worked towards the second spot and it is very pleasing for the club because this is the best season we have had at Chester in our history. We now end in the play-off and it is a pretty prestigious place to be. The guys are just really excited for the weekend.”

Having moved to Hare Lane after the 2015/16 season, where Chester survived relegation on the final day, van Deventer described the club’s position as “vulnerable”. However, with mostly the same group of players at his disposal from three year ago, he has managed to turn their fortunes around.

This is a side that has also shown great belief all season. In sport, that belief comes from momentum and whilst Canterbury rested a few key players last weekend, Chester wanted to maintain their bounce.

Last Saturday’s dramatic 22-21 win over Preston Grasshoppers, the team Chester beat to avoid the drop in 2016, means they head into this weekend on the back of six wins from their last seven games.

“Last week was really tough,” added van Deventer.  “It was good to get us in the frame of mind to compete because in the side of your mind, you always have to focus on the play-off the following week.

“It was great to get over the line and keep that momentum going. Momentum is a lot more important than rest.

“We risked some key players getting injured, but it is one that paid off for us. We have come across with momentum because if we would’ve had one or two losses leading into this weekend, you would have started to second guess yourself, but the guys are going into it full of confidence and we’re right up for the challenge.”

They look like a team which means business and the grit and determination they displayed against Hoppers has been a common theme for Chester throughout this season.

That quality will only help them on Saturday. As mentioned, no side from the north has ever won a National Two play-off away from home and van Deventer is taking the same approach as his opposite number Andy Pratt; the history has no influence on the present.

It's been an unbelievable season for @RUFCChester. One more game and promotion on the line. Go well lads. https://t.co/otYpuX4mKp

“We can’t do much about the history and what happened in the past,” van Deventer added.  “Yes, the outcome over the last few years since the league has been divided has really favoured the southern sides for one reason or another as well as the team at home.

“It is extremely tough away from home and win at any stage I think, but we will be well prepared. We have been working and our guys will be focused. We will see it as a neutral venue and we want to test ourselves.”

Chester have produced their best away form for a number of years this term and their eighth win on the road will unquestionably be the biggest in club’s existence.

The stakes are incredibly high and the Cheshire outfit know what awaits them if they are to get the job done in Kent. Van Deventer is aware of how tough it would be in National One, but Chester won’t be looking too far ahead.

“It is obviously the highest the club would ever have been so to have the opportunity to go up to National One is really exciting,” he said.

“Looking at some of the other teams that have managed to get in National One, you can see how tough it has been for those northern sides, unless they have been able to spend an obscene about of money, to really hang on and find their feet.

“We are well aware of what we can potentially let ourselves in for and to be completely honest, we are out of depth at the moment, but we will give it a go. We will see if we can get there first before starting to worry about any of those things!”

So, what a play-off tie we have ahead of us. Come 5pm on Saturday afternoon, we will have a new side entering National One and contrasting emotions will be on show at the Marine Travel Ground.

It’s been some journey for both clubs and now they have the chance to create history.

Kick-off at the Marine Travel Ground is 3pm and we will also be bringing you live commentary with Joe Harvey and Warren Muggleton across social media so stayed tuned to ncarugby.com