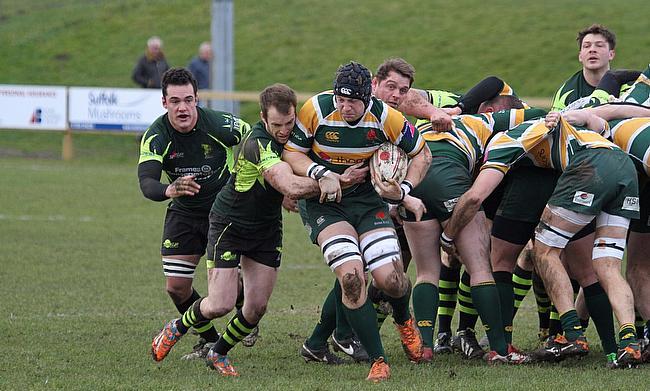 Barnes and London Irish Wild Geese are starting to build momentum in National Two South as both sides sealed victories in Round Nine.

Barnes made it three wins on the spin with a narrow triumph over Dings Crusaders while after seven straight losses, the Wild Geese have now won back to back games following their victory over Clifton.

League leaders Rams RFC also continued their positive run of results as they beat Old Redcliffians away from home while second placed Taunton Titans thrashed Bury St Edmunds and Henley Hawks made it five wins on the bounce against Redruth.

Rams RFC secured their fifth victory in a row as they defeated Old Redcliffians at Scotland Lane.

80’: Old Redcliffians?? 21-38 RAMS?? – Full time here at Scotland Lane. An excellent game of rugby by both teams today. However Rams again come on top beating Old Redcliffians with lots of excellent performances. Onto the next fixture against Dings Crusaders. ??

The National Two South leaders had to battle once again to maintain their recent unbeaten run as a penalty try plus scores from Oliver Taylor, Niall Kidd and Jack Steadman (2) helped them to victory.

Henry Bird (2) and Ed Boxall provided a response for Old Reds, but the hosts slipped to their eighth loss of the campaign which leaves them four points from safety.

Taunton Titans remain second in the National Two South table thanks to an eight-try demolition of Bury St Edmunds in Somerset.

The Titans took the lead through an early Nicholas Mason try and the centre also dotted down again at the hosts dominated the opening half.

Bury were able to shut out the home side for 30 minutes in the second half, but Ratu Vakalutukali and Sam Prior sealed a comfortable win.

Gary Kingdom capped off a fine team display with 10 points from the boot.

Henley Hawks continued their excellent form as they emerged victorious against Redruth to claim their fifth consecutive victory.

Aaron Simmonds and Finn Salterpietersen exchanged penalties before the former nudged Redruth ahead with 10 minutes remaining.

However, David Hyde came up with the goods for Henley who snatched the victory with a late try at the Recreation Ground.

Best crossed either side of half time to give the City Men a comfortable lead after an early score from James Stephens.

The hosts did find themselves level after Stephens’ effort following Matt Dight’s converted try, but Best worked his magic to keep the Bees at bay.

Stewart Pearl did cross to reduce Canterbury’s lead to 24-17, but Jarvis Otto’s try on 65 minutes ultimately sealed the win for the away side.

Dight did grab his second try late on, but it was merely a consolation for the Midlands club who fell to the bottom of the division after this defeat.

Tonbridge Juddians returned to winning ways in Round Nine as they clinched a victory over Guernsey, despite a spirited fightback by the visitors.

Will Robinson, Hugo Watson (2) and Rory McHugh put the home side on course for a welcome victory after back to back defeats.

Guernsey’s only first-half reply had been a Douglas Horrocks try at 7-0 down.

But scores from Owen Clemett, Nicholas Merrien and Thomas Ceillam brought the Channel Island side to within six points.

However, Guernsey could not find their way over in the final nine minutes as TJs held on for the win.

Old Albanian tasted that winning feeling once again as they defeated Worthing Raiders at Roundstone Lane.

The visitors edged the first period and took a 14-8 lead into the second half thanks to two converted tries.

Matt McLean nudged over a penalty for Worthing and Liam Perkins kept the hosts in front with a score just before the break.

Ben Holt cut OAs lead to just a single point as he grabbed the Raiders’ second try of the afternoon, but the away side regained control once again as they scored an interception try.

Worthing stayed in touch following another McLean penalty and they may have snatched the win following a red-card for OAs due to a high tackle.

However, with 10 minutes remaining, Worthing couldn’t break down the OAs defence as the men from Woollams clung on for the victory.

Tries from Ciaran Smyth and Daniel Ruddock made it three wins in a row for Barnes as they edged past Dings Crusaders, who finished this contest with 14-men.

The game was level at 5-5 at the break as Smyth’s try was cancelled out by Thomas Hargan, but Ruddock’s effort on 55 minutes proved to be decisive.

Ill-discipline overshadowed the end of this encounter as both sides had players sin-binned before Dings’ Michele Canulli was sent off for foul play with one-minute remaining.

London Irish Wild Geese came back from 12-0 down to beat Clifton and secure successive victories in National Two South.

The visitors – who picked up their first win of the season last weekend – found themselves 12 points behind after just 11 minutes following a brace from Will Pomphrey.

However, the Wild Geese sparked into life before half-time to level the game as Scott Moore and Oghenetejiri Ajuchi both crossed.

Lee Starling’s side scored the only points off the second period as Sam Gratton touched down soon after the interval before Oliver Turner wrapped up the win with a penalty late on.