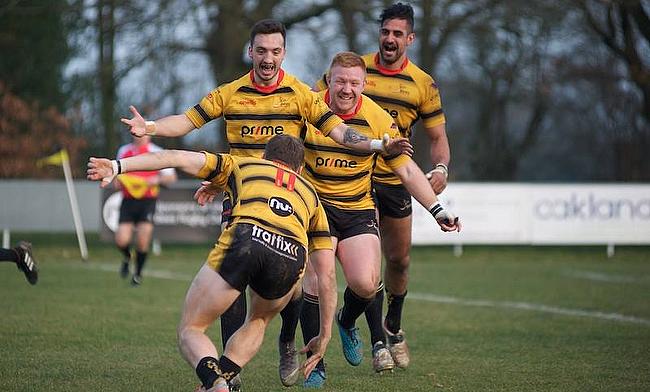 Pete Glackin’s men produced an excellent performance and the Bees are now eight points shy of safety with six games left to play.

As for the Wild Geese, they are 14 points away from climbing out of danger after this loss while rivals Guernsey are 18 points behind the safety places after losing to Canterbury.

Staying with Canterbury, they tightened their grip on the play-off spot following that victory over Guernsey and wins for Henley Hawks, Tonbridge Juddians and Taunton Titans meant there was no room for error.

At the summit, Rams RFC took another step towards the title after a comfortable win against Dings Crusaders while elsewhere, Redruth beat Old Albanian and Bury St Edmunds got the better of Worthing Raiders.

Andrew Denham scored a hat-trick and Ben Henderson grabbed a brace as the league leaders remain 12 points clear at the summit.

Conor Corrigan and Alex Seers also scored for the Rams, while the visitors were also awarded a penalty try.

Matt Smith went over twice for Dings, with Tom Anderson also dotting down for the hosts.

Canterbury maintained their march towards the National Two play-off as they beat relegation-threatened Guernsey in convincing fashion.

Harvey Young converted his own score, but Guernsey responded to lead 10-7 thanks to a double from Anthony Armstrong.

However, Ricky Mackintosh, Sam Sterling, JJ Murray and Aiden Moss all crossed to give the City Men a commanding advantage at half-time.

Sterling scored his second after the restart and the final points of the afternoon came from Guernsey as Matt Creber came off the bench to score.

The result for Canterbury keeps them four points clear of their rivals while Guernsey are 18 points from safety with six games remaining.

Henley Hawks produced a superb fightback and also had to repel a late response from Clifton to secure a vital victory in their play-off bid.

Clifton squandered a 21-5 lead and trailed 33-21 in the final quarter.

The first 20 minutes were superb from Clifton as Benedict Edwards, Matt Davies and Chris Levesley all crossed, while Daniel Barnes touched down for Henley.

Barnes’ second plus tries from David Manning, Sam Lunnon and Alex Bradley put the Hawks ahead before both sides exchanged scores.

Henry Harper’s effort was cancelled out by Barnes’ hat-trick try and despite Levesley going over with five minutes remaining, Henley held on to stay four points behind second-placed Canterbury.

Tonbridge Juddians maintained their excellent run of form as they beat Old Redcliffians at Scotland Lane.

Peter Dankert’s men fell behind to a Craig Owen try, but scores from Duncan Tout, Charlie Edwards and Ryan Jackson helped TJs into a healthy 21-7 lead at half-time.

Henry Bird gave Old Reds the ideal start to the second period as he raced over, however, TJs mustered up a response again as Tout and Mike O’Sullivan dotted down to keep the away side in the ascendency.

Finlay-Coxon Smith scored TJs’ sixth try, either side of efforts from Old Reds’ Scott Coster and Jermaine Jones, as the men from the Slade saw out their latest victory to stay in the play-off conversation.

Taunton Titans once again left it late as they snatched a victory against Barnes in Round 24.

The Titans led 17-12 at the break thanks to a brace from Oliver Massy-Birch and a score from former Exeter Chief Matt Jess on his debut.

The late penalty from @kingdomg15 which sealed a tense 20-19 win for @tauntonrfc against Barnes this afternoon. Full report and reaction to follow… pic.twitter.com/yEUxhVYbEc

George Head and Alastair Ryan crossed for Barnes in the opening 40 and they were able to move in front as Daniel Holmes raced over.

However, Taunton secured yet another narrow victory with time running out. The ever-reliable Gary Kingdom slotted over a penalty on 77 minutes as Tony Yapp’s side returned to winning ways at the first time of asking.

Redruth’s recent excellent home form continued in Round 24 as they picked up a brilliant win over Old Albanian at the Recreation Ground.

Eight points from the boot of Aaron Simmonds and a try via Richard Brown put the Reds 13-5 ahead after 21 minutes.

Charles Watson added to Matthew Deane’s earlier effort to cut the deficit to just one point before the interval.

Bradley Howe’s try kept the hosts in front before OAs’ Dan Watt landed a penalty to make it 18-15, but the away side were blown away in the final 10 minutes.

Jake Clemson, Nielson Webber and Rob Coote wrapped up the bonus-point and the victory for Redruth, who are now up to sixth in the league standings.

The full-back produced a superb first half display as converted his own score, added the extras following Jaid Wiltshire’s try and landed a penalty to help Bury into a 17-8 interval lead.

Limlei was on hand to convert Wiltshire’s second score on 45 minutes, but the visitors were unable to add to their tally for the reminder of the game.

Matt McLean had scored a try and a penalty in the first period for Worthing and the hosts reduced the gap to 24-15 when Curtis Barnes darted over.

The Raiders set-up a tense ending when Barnes grabbed his second, but the Wolfpack held on in Sussex.

Dan Kelly put the Bees in front, but visitors hit back soon after through Sean Cunningham. However, the home side led 21-7 at the break as Kelly grabbed his second after Matt Dight had touched down.

Two tries in seven second-half minutes from Umraan Jadwat and Corey Venus put the Midlands club in control and it was enough for Pete Glackin’ side to secure a vital win.

Josh Amadi did score a consolation for the Wild Geese, but this defeat means they are now 14 points adrift of safety while the Bees are only eight points away from climbing out of the bottom three.