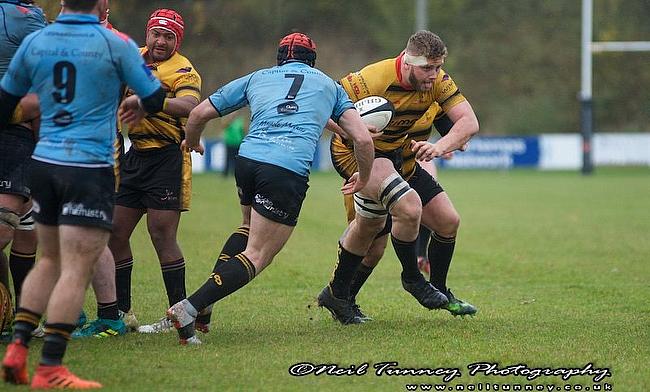 As bonfire night approaches, London Irish Wild Geese will be hoping their spark doesn’t fizzle out this weekend when they take on rivals Birmingham and Solihull at Hazelwood.

Lee Starling’s side lost their first seven games of the season, but the Wild Geese head into Round 10 with back to back wins under their belt and they have a good opportunity to make it a hat-trick of victories against a Birmingham side who are also in the bottom three.

The Bees fell to the foot of National Two South in Round Nine so they will be keen to start digging themselves out of trouble, as will Old Redcliffians who travel to Tonbridge Juddians on Saturday.

At the top of the division, Rams RFC can head into the first break of the season in control of the title race if they can overcome Dings Crusaders while fellow promotion candidates, Taunton Titans, host an in-form Barnes side and third placed Henley Hawks entertain Clifton.

Elsewhere in National Two South, Canterbury will be looking to keep in touch with the frontrunners when they go to Guernsey while Redruth take the trip to Old Albanian and Worthing Raiders face Bury St Edmunds.

Rams RFC stayed in the box seat in National Two South after a solid victory over Old Redcliffians in Round Nine. Head coach Seb Reynolds praised his side’s controlled performance at Scotland Lane and the Rams remain four points clear at the summit as we approach the third-way point of the campaign.

It is now five wins on the spin for the Berkshire club and they will be hoping to add to their tally when Dings Crusaders visit Old Bath Road this Saturday. Luke Arscott’s men will be itching for a reaction when they arrive at the home of the league leaders after a frustrating 10-5 loss to Barnes last weekend. Dings have been excellent since returning to this division, but after really good wins against Old Albanian and Bury St Edmunds, their loss to Barnes may have damped their spirits a little. However, a win against the table toppers in Round 10 would certainly put last weekend’s result to one side.

Taunton Titans maintained their grip on second spot in National Two South after a convincing win over Bury St Edmunds last weekend. Tony Yapp’s side secured a 50-0 victory at the Commsplus Stadium and now they will be aiming for three wins in a row when they visit Barnes in Round 10.

Sticking with the theme of ‘three wins in a row’, Barnes managed to achieve that feat last Saturday. The London-based side edged past Dings Crusaders to secure a hat-trick victories which leaves them in 10th place and 10 points clear of the relegation zone. Barnes were promoted into this division back in April and now Joe Gray’s side will want to keep heading in the right direction by securing their fourth triumph on the bounce at Queen Elizabeth Walk this weekend.

David Hyde was the man of the moment for Henley in Round Nine as his last-gasp try clinched victory for the Hawks away at fellow promotion challengers Redruth. Nigel Dudding’s side passed their latest examination in Cornwall and now the men from Dry Leas have won their last five games as they prepare to host Clifton this weekend.

The Hawks, who sit third in the table, top the form guide along with league leaders Rams RFC whereas Clifton are struggling to find positive results. After their third win of the season against Birmingham and Solihull in the middle of October, Matt Salter’s men have slipped to successive defeats and the Gloucestershire outfit once again find themselves hovering above the relegation places. Clifton are seven points clear of the bottom three and while it is far from a worrying position to be in, a second away triumph of the term could provide a shot in the arm for the Lavender and Blacks.

Things are bubbling nicely at Canterbury. The City Men fought hard for their latest victory over Birmingham and Solihull in Round Nine and they now head into Round 10 in fourth place and just four points off the top two. Andy Pratt’s men have to be considered as promotion candidates because three wins from their fixtures in October has put Canterbury right into the mix.

The Kent-outfit travel to the Channel Islands this weekend to take on Guernsey and the hosts will be looking to return to winning ways. Jordan Reynolds’s side, who are competing in National Two South for the first time this term, occupy 13th place as things stand and they are four points clear of the relegation zone. Back to back wins against Barnes and Clifton seemed to have kickstarted their campaign, but since then, the Raiders have slipped to three consecutive losses. Can Guernsey fire up their season once again to begin November with a bang?

Redruth head coach Pale Nonu believed it was a combination of excellent play from Henley Hawks and their own errors which led to the Reds losing their first home game of the season last weekend. The Cornwall-based side had been on a four-match winning streak towards the end of October, but consecutive defeats has just halted Redruth’s promotion charge. Nonu’s men now sit seven points off the top two, but they can get their campaign back on the straight and narrow when they visit Old Albanian in Round 10.

The hosts may have expected to be included in the promotion race as we reach the third-way point of the season, but OAs have really struggled for consistency since relegation from National One in April. Gavin Hogg’s side sit seventh in the table, however, a battling win over Worthing Raiders last Saturday could provide the spark which the Hertfordshire outfit are looking for. Up next is the visit of Redruth before the division takes a break for a week so OAs will be hoping to resume the season on November 17th with back to back wins under their belt.

Tonbridge Juddians responded to successive defeats by claiming a victory over Guernsey at the Slade in Round Nine. TJs did have to hold off a spirited fightback from the Raiders, but a sixth win of the campaign would have pleased Peter Dankert’s side after a mini-blip in form.

The Kent-outfit currently occupy sixth place in the table and they are once again at home this weekend as they entertain Old Redcliffians. Old Reds come into this fixture bottom of the form table having lost their last five matches and the men from Scotland Lane have also only secured one win all term, so it isn’t a surprise to see them in the relegation places as things stand. However, the Bristol-based side are just four points from safety so their second away win of the season could see them move out of the danger zone ahead of the first break in the campaign.

Last Saturday, Worthing Raiders’ 100 per cent home record in National Two South came to an end against Old Albanian and coach Ben Coulson admitted his side were “upset” by their performance at Roundstone Lane. The Raiders have now lost two matches on the spin so the ninth-placed side will be keen for a reaction when they visit Bury St Edmunds on Saturday.

The Raiders may fancy their chances of securing their second away win of the season in Suffolk as Bury are going through a dip in form. The Wolfpack have won just one of their last five games and Jon Curry’s side come into this clash on the back of a 50-0 hammering against Taunton Titans. Bury sit nine points clear of the drop, as things stand, so they will be keen to stop their slide down the table as soon as they can.

Birmingham and Soilhull began last week’s match report against Canterbury by mentioning they had slipped to the bottom of the table after their home defeat against the City Men. An inspired performance by Oli Best proved too much for the Bees and the Midlands club are now propping up National Two South after just one win from their first nine games.

One of the other reasons why Pete Glackin’s side are at the foot of the division is because their opponents this Saturday, London Irish Wild Geese, secured their second win on the bounce last weekend as they look to move out of danger. Lee Starling’s side had lost their first seven fixtures, but the Wild Geese are now five points from safety after successive victories over Redruth and Clifton, respectively. The men from Hazelwood maybe quietly confident of continuing their revival at home on Saturday against a Birmingham and Solihull side that is desperate to turn their fortunes around.