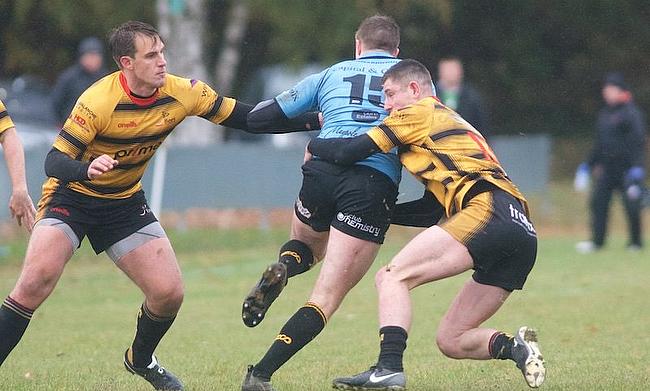 Canterbury will be looking to maintain their National Two South play-off bid when they host Birmingham and Solihull on Saturday.

The second-placed side have won their last four matches in a row and it has enabled Andy Pratt’s men to open up a seven-point gap between themselves and their rivals.

Two of their fellow challengers, Taunton Titans and Henley Hawks, clash next weekend in a crucial game in hand for both sides, but if Canterbury can win on Saturday, they will remain in the play-off position heading into March.

Back to Round 23 and the Titans travel to Bury St Edmunds this weekend and Henley host Redruth while third-placed Tonbridge Juddians visit Guernsey after recently beating league leaders Rams RFC.

In terms of the Rams, they have a 12-point lead at the summit and they can take another step towards National One when they entertain Old Redcliffians.

Elsewhere this weekend, Old Albanian welcome Worthing Raiders to Woollams, Clifton are up against London Irish Wild Geese and Dings Crusaders take the trip to London to face Barnes.

Rams RFC would have experienced a rare feeling last weekend. The National Two South league leaders tasted defeat for only the second time this term as they lost to play-off chasing Tonbridge Juddians at the Slade. Seb Reynolds’ side had put together a run of 17 straight wins prior to Round 22 and their remarkable form this term still leaves them with a 12-point lead at the summit.

“We dropped our level and allowed a top side to take the spoils.” – 17 and out for @Rams_RFC as their record-breaking winning run ends at @TJRFC – https://t.co/MT599XCnVM pic.twitter.com/PQjkKPtu1n

With eight games to go, the Rams are in the box seat and they will be keen to refocus and return to winning ways when they host Old Redcliffians on Saturday. Following a heavy defeat against Bury St Edmunds at the beginning of February, Old Reds bounced back last weekend as an excellent second-half performance helped them over the line against Barnes. Saul Nelson’s side are 16 points clear of the relegation places following six wins from their last nine games, but they have not won away from Scotland Lane in 2019 so they will be aiming to become the first side to beat Rams RFC at Old Bath Road for 13 months.

Canterbury certainly sent out a statement of intent in Round 22. An excellent win away from home against Clifton saw Andy Pratt’s side tighten their grip on second place in National Two South and the City Men are now seven points clear of their fellow play-off challengers. The Kent-outfit have also won their last four matches so confidence will be high when they entertain Birmingham and Solihull at the weekend.

However, the Bees will arrive at The Marine Travel Ground with some renewed hope. Last week, Pete Glackin’s side recovered from a slow start to defeat rivals Guernsey and now the Midlands club are 11 points from safety with nine matches in their season remaining. The men from Portway also have a game in hand against Clifton next week, which could be crucial, so a positive result against promotion chasing Canterbury would only improve their survival chances.

After 17 matches, league leaders Rams RFC were finally beaten and the team to halt their run were Tonbridge Juddians. Peter Dankert’s men produced an excellent display at the Slade to defeat the Berkshire club and while the headlines focused on Rams’ rare defeat, TJs continued to strengthen their play-off bid.

The Kent outfit have lost just one of their last 14 matches and they sit seven points behind Canterbury, but TJs may even be slightly frustrated that, despite their superb run of results, there is still a sizable gap between themselves and the play-off position. However, their focus has to be on Guernsey who come into this Saturday’s fixture following a loss against rivals Birmingham and Solihull. Jordan Reynolds’ side are now bottom of table and 13 points adrift of safety, but back at Footes Lane, they will be hoping for a positive result to spark their revival back into life.

It was far from pretty and straightforward, but Taunton Titans got the job done against Old Albanian in Round 22. The boot of Gary Kingdom clinched the victory for Tony Yapp’s side at the Commsplus Stadium and it is now eight wins from the last nine games for the play-off chasing Titans.

Looking like spring has arrived…Come down and enjoy Bury V Taunton 3pm KO.https://t.co/pIie1zvvNY

The Somerset club sit fourth in the table and are seven points behind second-placed Canterbury, but Taunton have a game in hand to come against rivals Henley Hawks next Sunday. In the meantime, their focus will be on a trip to Bury St Edmunds who suffered a narrow loss to Dings Crusaders last weekend. Nick Wakley’s men would have been disappointed following their superb victory against Old Redcliffians in Round 21 so the sixth-placed side will be hoping to respond from their frustrating loss back in Suffolk this weekend.

George Griffiths was the star of the show as Henley Hawks surged to victory in Round 22. The winger scored a hat-trick to help his side defeat Worthing Raiders as the Hawks maintained their play-off push in National Two South. Next weekend will be pivotal for Henley when they take on rivals Taunton Titans at Dry Leas, but firstly, they will be concentrating on their clash with Redruth this Saturday.

Henley are eight points behind Canterbury, but Redruth will be out to disrupt their top two hopes. The Reds come into this clash after a comfortable win over London Irish Wild Geese but Director of Rugby Nigel Hambly has urged his team to show more intensity as they push towards a positive end to the campaign. Redruth have lost their last five away matches, but victory against one of the play-off candidates would certainly please Hambly and his side.

“This was more like it.” This is the opening line of Old Albanian’s match report from their game against Taunton Titans as Gavin Hogg’s side produced arguably their best performance for a couple of months. Yes, OAs eventually lost 10-8 last weekend, but there were several positives for the Hertfordshire club to take despite suffering their seventh straight defeat.

The spirit and determination on show from OAs is something they will be keen to harness in the remainder of their difficult season and this weekend, they will be hoping to end their winless run against 12th placed Worthing Raiders. The visitors to Woollams are also finding victories hard to come by as their latest defeat to Henley was their fifth loss in a row. Both sides could do with a welcome victory as we approach the final two months of the campaign so who will stop the rot on Saturday?

Clifton would have been frustrated with their own individual errors in Round 22 as the Lavender and Blacks fell to a defeat against Canterbury. Head coach Matt Salter said his side were “punished” by the play-off contenders and now the Bristol outfit will be looking for a reaction after three straight defeats.

Their next two fixtures come against relegation-threatened sides in the shape of Birmingham & Solihull and London Irish Wild Geese, with the latter first on the agenda. The Wild Geese currently sit 11 points from safety and their survival chances were dented after losing 39-3 to Redruth last time out. However, Wild Geese have picked up back to back wins at Hazelwood and a trio of home victories would once again reignite their fight to avoid relegation.

Dings Crusaders recaptured the winning feeling last weekend as they battled to a victory against Bury St Edmunds in Bristol. The 10th placed side held on for only their second win since the beginning of December as Luke Arscott’s men took another step towards securing their position in National Two South for another term.

If Dings were to achieve survival, it would be a very pleasing season following promotion last April and Barnes will probably be in the same boat. As things stand, the London-based side are 13th in the table and 11 points clear of the drop zone following a run of just one win from their last 11 games. Barnes still have room to breath at the moment, but they will be keen to secure their first win at Barn Elms since November to maintain some daylight between themselves and the drop zone.