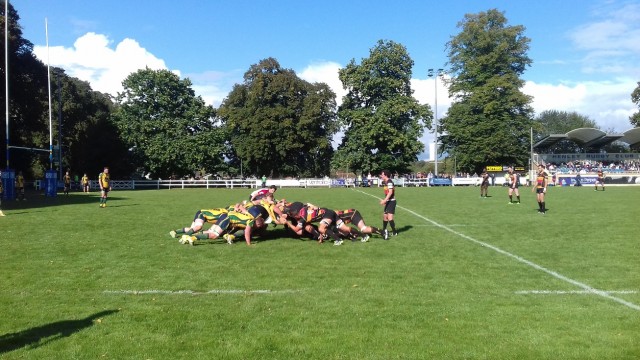 In the final couple of months of last year, the top two in National Two South managed to distance themselves from the chasing pack meaning Chinnor and Cinderford are now embroiled in a two horse race for automatic promotion to National One.

The gap between second and third place is 13 points, but it would be an amazing turnaround if the frontrunners were to have a dip in form.

Chinnor and Cinderford meet at the end of this month, but for no,  the league leaders kick-off 2018 with a home game against London Irish Wild Geese while Cinderford entertain Henley Hawks.

Meanwhile in the top half, third placed Redingensians will be aiming to keep up their superb form at home against Worthing Raiders, Taunton Titans travel to Barnstaple, Redruth go to Wimbledon and Bury St Edmunds take the trip to Old Redcliffians.

Elsewhere, Canterbury are away at Broadstreet and Tonbridge Juddians play host to Clifton.

It was around this time last season where Chinnor’s promotion hopes took a slight dent, but it was a dent that would ultimately prove costly. Matt Williams’ side went on a three game winless streak which played a part in the Black and Whites missing out on a top two finish, but 12 months on, Chinnor look like they have learnt their lesson. The men from Kingsey Road ended 2017 with a bang as they beat Henley Hawks to secure their 15th straight win and the unbeaten league leaders begin the New Year against London Irish Wild Geese in front of their own supporters.

Chinnor have won their last 26 league matches at home so I think it is fair to say that the odds are stacked against London Irish Wild Geese coming into this contest. The visitors travel to Oxfordshire having won just one of their last six matches, but Lee Starling’s men do sit 12th in the table and they are a comfortable distance away from the bottom three. After fighting off relegation last term, stability in National Two South is probably the aim for Wild Geese in the reminder of this campaign and a shock victory at Kingsey Road on Saturday would be a sensational start 2018.

As 2017 drew to a close, Cinderford knew they had done all they could to keep the pressure on Chinnor. Since a defeat against the league leaders at the start of October, Paul Morris’ side have won their last 10 matches which leaves the men from the Forest just one point off the top as we begin the New Year. A battling victory against Clifton just before Christmas means Cinderford are still firmly on course for a top two finish, but they will be tested once again when Henley Hawks visit Dockham Road on Saturday.

Cinderford did thrash Henley 90-17 earlier in the season, but the Hawks have certainly recovered since then. Despite a narrow defeat against local rivals Chinnor to end 2017, Henley find themselves sixth in the table following four wins from their last six matches. There is certainly progression on show from Pete Davies’ side this term as they continue building their way back to National One and the men from Dry Leas are more than capable of inflicting a first defeat in three months on high-flying Cinderford.

It has been a very successful 12 months for Redingensians in National Two South. A top half finish in the 2016/17 season was another step in the right direction for the Rams, but Owen Root’s side are once again aiming for high accomplishments. As we begin 2018, the Berkshire club currently accommodate third place in the table and welcome Worthing Raiders to Old Bath Road this weekend having won 10 of their last 11 matches.

Only Chinnor can better that run of form and the Rams will be hoping to continue their scintillating sequence of results when Worthing visit this Saturday. The Raiders fought hard to claim a win over Wimbledon in their final fixture before the Christmas break and that aforementioned victory was their fifth from their last six matches. Like the hosts, Worthing are certainly enjoying their rugby at the moment and now, they will be aiming to become the first side to win at Redingensians since September.

Following a downturn in form, fourth placed Taunton Titans would have been pleased to end 2017 on a high note as they secured a 36-17 victory over Old Redcliffians. That win in Somerset was only Taunton’s second in just under two months and considering Tony Yapp’s side won their first nine games, it was a much needed morale booster. Yapp stated that the Titans’ recent run of form now means a top two finish is extremely unlikely, but Taunton will want to get their season back on the right path, starting with an away trip to Barnstaple in Round 17.

I think you can say that Barnstaple have had a very positive last 12 months. Steve Perry’s side survived relegation in their first ever season in National Two South and this term, Barum look set to avoid the same scenario as they currently sit 11th in the table and 18 points clear of the drop. The men from Pottington Road did end 2017 without a win in three matches, but with four of their six wins this season coming at home, they will be hoping they can add to that tally and get 2018 off to the perfect start.

After three straight defeats, Redruth’s season looked as though it was getting away from them slightly but before the festive break, the men from the Recreation Ground got their campaign back on track. Consecutive victories against Tonbridge Juddians, Broadstreet and Barnstaple means the Reds are now back in the top six to begin 2018 and Pale Nonu’s side have a wonderful opportunity to keep their upturn in results going when they visit Wimbledon.

The 1st XV are back in action this weekend, here is how they line up tomorrow against @RedruthRugby, kick off is at 2pm come down to WRFC to support pic.twitter.com/S44O95vk66

The hosts for this fixture are currently bottom of the table, but the Dons have started to show their qualities. The South-West London side have given themselves a glimmer of hope that they can pull off a great escape thanks to a victory over Old Redcliffians and a battling performance against Worthing Raiders, but despite seven points from those two matches, they are still 15 points from safety. It is certainly not a lost cause for the side that has won just once in 16 matches, but Wimbledon need to keep producing positive displays if they are to stand any chance of staying in this division.

Bury St Edmunds ended a run of three successive defeats as they entered the Christmas break following a victory over Broadstreet. The 44-15 score line suggests a comfortable win for Ollie Smith’s men, but it was a battling performance from the Wolfpack. The win for Bury kept them in the top half of the table which highlights the solid job Smith and his coaching staff have done in Suffolk since taking over at the club at the start of the season.

Bury get 2018 underway with a trip to relegation threatened Old Redcliffians. The home side lost out to Taunton Titans in their final match of last year, but a few positive performances since the end of November means the Bristol outfit are now only nine points from safety. There is still a lot of work ahead for Saul Nelson’s side, but a second victory of the campaign this weekend could be the catalyst for their survival challenge.

Canterbury travel to Broadstreet this Saturday looking to click their season back into gear. Andy Pratt’s side ended 2017 with four defeats from their final six matches which means the City Men have slipped away from the top four and down to ninth in the table. The Kent outfit’s last victory came just over a month ago away at London Irish Wild Geese and another victory on the road will be a much needed shot in the arm for the men from the Marine Travel Ground.

As for Broadstreet, they are also desperate for a win. After victory over Wimbledon at the start of December, Paul Hurst’s side have been unable to build on their second win of the season and it means Street are 12 points from safety at the start of 2018. It is far from over for the Midlands side and they will be aiming to take advantage of Canterbury’s recent dip in form as they look to dig their way out of trouble.

Tonbridge Juddians will be very satisfied with how their first half of the season went in National Two South. Following promotion in the spring, TJs have performed well in the fourth tier of English rugby and they fully merit their 10th placed position in the league standings. The men from the Slade have won four of their last six matches and they have also picked up three straight victories on their own patch.

Happy New Year – Back to the grindhttps://t.co/lRlSDFIN9X

In contrast, their opponents Clifton are itching to find some form. The Gloucestershire outfit have won just one of their last nine matches which has seen them slide closer towards the drop zone. The bottom three sides have all picked up points in recent weeks which means Clifton are now just nine points clear of the relegation places. Their performance just before Christmas against Cinderford was arguably their best for a while and they will be aiming for a similar display this weekend as they look to kick-off 2018 with a welcome victory.