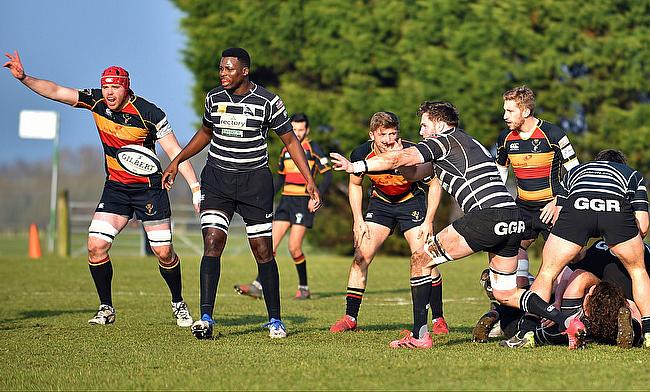 Only four points separate the leading pair in National Two South as Chinnor host Cinderford in the much anticipated top of the table clash this weekend.

The top two go head to head at Kingsey Road on Saturday afternoon as Matt Williams’ side aim to close the gap on the Foresters in the race for the title and promotion to National One.

Whilst this game quite rightly takes centre stage, there are some other intriguing fixtures elsewhere in the division this weekend.

Third placed Redingensians will be aiming to return to winning ways when they host an in-form Tonbridge Juddians while Taunton Titans go to Worthing Raiders, Redruth travel to Bury St Edmunds and Henley Hawks entertain Old Redcliffians with the visitors aiming to jump out of the bottom three.

“This game will not define who wins the title”. These are the words of both Matt Williams and Paul Morris as their sides’ lock horns at Kingsey Road this Saturday in what is set to be an enthralling contest between the top two teams in National Two South. As things stand, Cinderford are four points clear at the summit following a run of 13 straight victories and they have not been defeated since they were beaten by Chinnor at the beginning of October.

In fact, that was the only game Morris’ men have lost this term and they also head to Oxfordshire having picked up maximum points from all 10 of their away fixtures so far. However, this will arguably be their toughest test on the road as Chinnor look to wrestle top spot back. Williams’ side were knocked off their perch at the beginning of the month following a surprising home loss against London Irish Wild Geese, but they have recovered superbly to stay in touch with Cinderford. This game may not decide who will be crowned champions come April, but it will certainly play a massive part in the race for automatic promotion.

If Redingensians had harboured any top two ambitions, then they may have just fizzled out. Fixtures against Chinnor and Cinderford were the ideal opportunity to break into the title race, but back to back defeats at the hands of the frontrunners now leaves the Rams 17 points off the promotion places. Nevertheless, this has still been a wonderful season for Seb Reynolds’s side and they will be aiming to continue their excellent campaign when they host Tonbridge Juddians this weekend.

Despite coming into this fixture on the back of successive losses, the men from Old Bath Road have actually won 11 of their last 14 matches so Tonbridge Juddians will face a tough test. However, it is an assignment which TJs will be relishing as they head to Berkshire in fine form. The side promoted from National Three last April are really enjoying life at this level as they currently sit eighth in the league standings having won their last five matches. The Kent outfit are certainly one for the form sides and they may well be confident of travelling back down the M25 with another victory under their belts.

Having seen their promotion chances fade away following a poor run of form between November and December, Taunton Titans now have third place in their sights. Of course, finishing in the top two may well have been the aim for Tony Yapp’s side, but the bronze medal spot is now their realistic target following three wins from their last four matches coupled together with Redingensians’ two losses.

The Titans are just a point off third place so they would have been frustrated to loss to Redruth last time out, but they have the chance to react immediately when they travel to Worthing. The Raiders head coach Jody Levett has stated this week that he is looking forward to the visit of Taunton as his side look to bounce back from their heavy defeat at Chinnor. Worthing are back at home this weekend where they have won six successive matches so can they make it seven in a row at Roundstone Lane this Saturday?

Following their win at home last time out, Redruth have another fixture against a team close to them in the division as they travel to Bury St Edmunds this weekend. The Reds’ win over Taunton was a welcome one for Pale Nonu’s men after back to back defeats to begin 2018 and with the gap between themselves and the Titians down to nine points, the Cornwall-based side still have a chance of finishing in the top four.

2PM KO on Saturday…Did you know we only have 5 home games left this season?https://t.co/npdKaR009G

But if they are to achieve that feat for the second time in three seasons, they must improve their away form. Out of Redruth’s 11 victories this term, only two have come on the road so their hosts, Bury St Edmunds, may look to use that to their advantage. Bury head into this fixture in seventh place having won their last two home fixtures, but they are really struggling for some overall consistency. A disappointing loss at Wimbledon last time out means the Wolfpack have won just two of their last seven matches so Ollie Smith will be calling for a reaction from his players as they look to end this blip in form.

Last week’s away win over Broadstreet was a much needed boost for Henley Hawks following a tough start to the New Year. The Hawks currently sit sixth in the division and three successive defeats threatened to take the shine off a strong campaign, but a solid display in the Midlands keeps the men from Dry Leas heading in the right direction.

Pete Davies’ side were relegated from National One in 2016 so Henley are now slowly building their way back to challenging for a top two spot and hoping to be competing alongside the Oxfordshire side next season will be Old Redcliffians. Saul Nelson’s men are fighting extremely hard to avoid an immediate relegation back to National Three and a crucial win against Clifton last weekend has given them a superb chance to beat the drop. Old Reds are now just four points from safety following two wins from their last three fixtures and a first away triumph of the campaign could see them out of the bottom three come Saturday evening.

It has been a frustrating few weeks for Canterbury. After a splendid first half of the season which saw Andy Pratt’s side deservedly sitting in the top six, the City Men’s inconsistencies have come back to haunt them and once again, they have slipped down the division. A run of just one win in five matches has seen the Kent outfit fall to 10th in the table, but they are only five points off sixth placed Henley Hawks.

Tony Mann's match report is now up on the website see.. https://t.co/oqa9ohqutU

After finishing in the top half of the table last year, Canterbury will be aiming to build upon that but they must nip their poor form in the bud when they welcome Wimbledon to the Marine Travel Ground this weekend. The Dons will arrive in Kent buoyed by their excellent victory over Bury St Edmunds which saw them move off the bottom of National Two South and to within 11 points of safety. Three wins from their last five matches has given Wimbledon a chance of pulling off a remarkable escape and if they were to maintain their good recent form this weekend, then survival could be a real possibility.

Barnstaple picked up a most welcome victory against Canterbury in Round 19 and Steve Perry’s men will be hoping that can be a catalyst for the rest of their season. Barum had not won in six matches prior to their triumph at Pottington Road, but their win now leaves the Devonshire side 11 points clear of the relegation zone.

It looks as though Barnstaple will avoid relegation for the second successive season in National Two South which would be another great achievement and they can take a huge step towards that aim if they secure victory at Clifton this weekend. Following their tense and narrow win over Broadstreet two weeks ago, Darren Lloyd’s men looked to have eased any relegation nerves, but losing to Old Redcliffians last Saturday means they are now firmly in a battle to avoid the drop. Just four points separate the Lavender and Blacks from the bottom three and they need to improve on just two wins from their last 12 matches otherwise they could find themselves staring at the possibility of relegation.

London Irish Wild Geese began the New Year by claiming the result of the season so far. Victory over title chasing Chinnor was a brilliant achievement for Lee Starling’s men, but they have not been able to build on that since the start of month. Granted, a loss to Cinderford is nothing to get too down about, but a defeat away at Tonbridge Juddians last week could have been an opportunity for them to claim their seventh win of the campaign.

However, it wasn’t to be and the Wild Geese now sit nine points clear of the relegation zone as they look to avoid the drop for a second season on the trot. Another side who is also desperate to stay in this division are Broadstreet who travel to Hazlewood this weekend. Street fell to the bottom of the table last Saturday following their defeat at Henley Hawks and it means Paul Hurst’s men are now 12 points from safety with 11 games to go. It is certainly far from over for the Midlands club and a second win in January will give them hope that they can maintain their National Two South status.