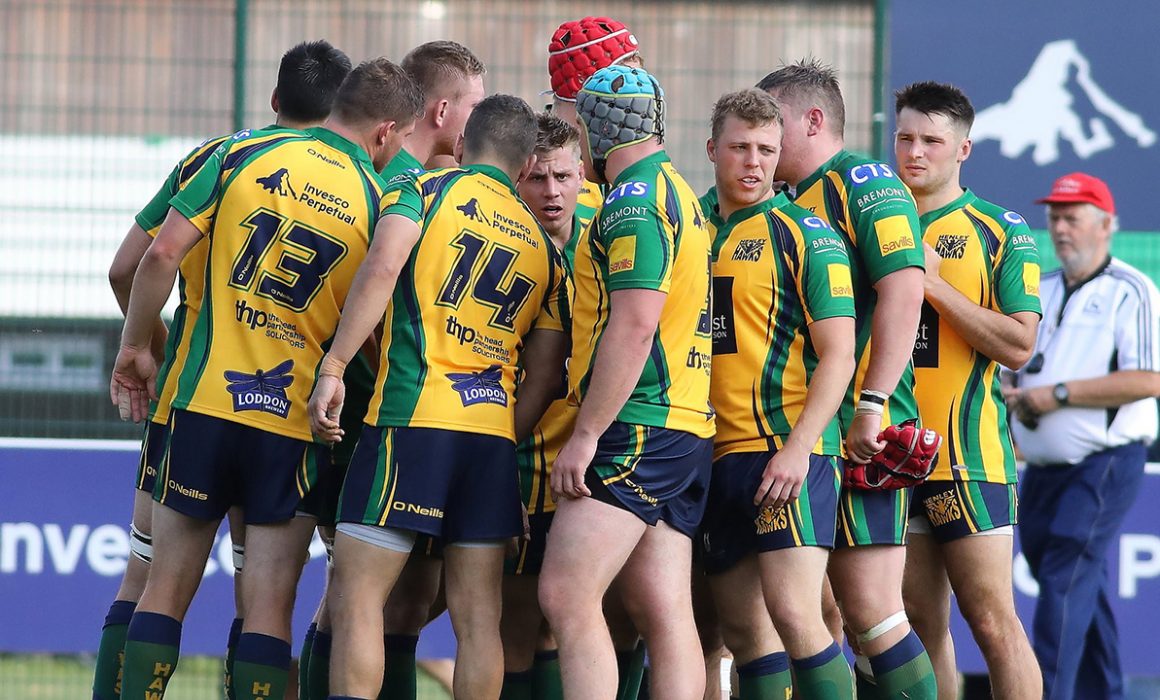 Chinnor have moved to the summit of National Two South following a battling performance against Barnstaple at Pottington Road.

Matt Williams’ men have gone top of the division following their ninth victory of the season, but also because Taunton Titans’ 100 per cent record was ended at home against Henley Hawks.

With Taunton suffering a defeat, Cinderford moved up to second following a hard-fought victory against Old Redcliffians while Redingensians kept up their excellent recent form with a win away at Wimbledon.

Elsewhere in Round 10, Redruth, Bury St Edmunds and Canterbury secured win while Tonbridge Juddians halt their slide with a superb win away at Broadstreet.

Chinnor moved to the top of National Two South following a hard-fought bonus-point victory away at Barnstaple.

Harry Mosely, Kieran Goss and Mike McDonald scored during the first period for Chinnor, but tries via Jarrad Hayler and Rob Dugard as well as a penalty from Gywn Parks levelled the scores up at 17-17 at the interval.

In a topsy-turvy second half, tries from Jonny Bentley and Jamel Hamilton put the visitors 29-17 ahead.

Both sides exchanged penalties which was more than sufficient for Chinnor who are now at the summit and remain unbeaten.

Cinderford are up to second in National Two South, but they had to battle for victory against a spirited Old Redcliffians at Scotland Lane.

The scores were tied at 19-19 at the break with tries from Henry Bird and Ethan Doyle being cancelled out by Cinderford’s Rob Winchle, Tim Brockett and George Porter.

Kai Little and Sam Hewick exchanged tries after half-time, but Cinderford began to take control of this contest when James Moffat  landed a penalty and replacement James Elliot dotted down.

Reuben Norville then went over to ultimately give Cinderford the victory, but there was still time for the hosts to grab a deserved bonus-point as James Clements crossed late on.

Taunton Titans fell to their first defeat of the season as they were beaten by Henley Hawks in Somerset.

The Hawks ended Taunton’s nine game winning streak and knocked them off the top of the table as Pete Davies’ men ran in six tries.

Taunton’s scores came via Lewis Webb, Ollie Rice and Sam Prior, but Tony Yapp’s side never really looked like winning this contest as Henley produced a superb performance to take maximum points from the Commsplus Stadium.

Redingensians made it five consecutive wins in National Two South as they came out on top against Wimbledon.

Jordan Souter gave the visitors the perfect start, the centre finishing off a following move to score.

Olly Poole extended the Rams’ lead with his second try in as many weeks and Robbie Stapley also touched down to give the away side a 19-13 half-time lead.

A close range try plus two penalties from boot of James Doe kept Wimbledon in touch, but that was as good as it got for the Dons who failed to capitalise on a yellow card shown to the Rams in the second period.

Instead, Redingensians were able to keep a cool head and their professionalism was rewarded late on as Ben Henderson’s try saw the Rams home.

Redruth edged out London Irish Wild Geese in an amazing 10-try match at the Recreation Ground.

The Reds had won all five of their home matches ahead of this contest and they had to battle hard to maintain their 100 per cent record in Cornwall.

George Owen and Reon Joseph each scored twice for Wild Geese – with Alex Seers landing four penalties – but despite a very strong showing by Lee Starling’s side, it was Redruth who clinched the points.

Chris Lord scored two tries to help secure Bury St Edmunds’ third win on the trot as they saw off the challenge of Clifton.

Lord crossed twice in the second period to make the game safe, but some excellent defensive work and a clinical edge gave Bury an 18-7 half-time lead.

Two Fraser Honey penalties and scores from Will Scholes and Dwayne Corcoran gave them the advantage despite losing players to the sin-bin.

Andrew Chesters had crossed for Clifton, but Lord’s first try kept the hosts in control.

Despite Rhys Luckwell’s response, Chris Snelling and Lord took the game away from Clifton, who did have the final say when Jack Pinker dotted down late on.

David Mcllwaine was sent off as Canterbury eased their way to victory over Worthing Raiders in Kent.

The visiting full-back was given his marching orders early in the second half after swinging an arm to prevent a try being scored and following that, Canterbury took control of this contest.

Worthing led 12-10 at the break when Jack Maslan crossed twice before Harry Sayers and Aaron Cooper scored for the hosts.

But after Mcllwaine had halted Charlie Kingsman illegally, the game turned into a rout for Canterbury who ran six more tries.

Two penalties tries plus scores from Kyan Brathwaite, Jimmy Green, Kingsman and Sayers sealed the inevitable win for Canterbury, while Worthing showed great spirit to rally back and secure a try bonus-point thanks to efforts from Kieran Leeming and Jamie Redmanyne.

Murray Galbraith-Lowe and Duncan Tout both scored braces while Fin Coxon-Smith, Tom Nicoll and Hugo Watson also touched down to lift TJs up to ninth in the table.

Broadstreet remain in the bottom three after this defeat and it leaves them 10 points adrift after 10 rounds of the season already played.