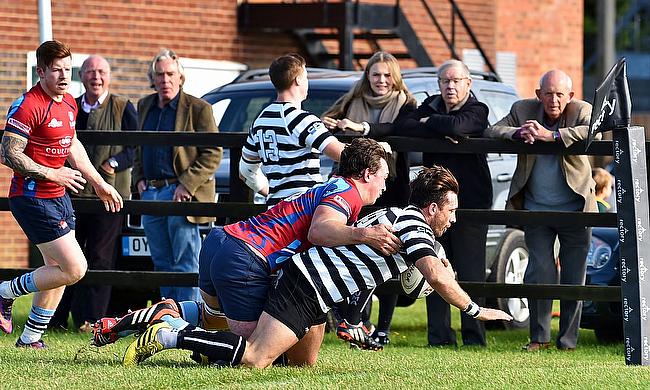 Matt Williams’ men are two points clear at the summit, but they are six clear of the Titians heading into this clash at Kingsey Road. A bonus-point win for the Oxfordshire side this Saturday would be the perfect start to the Christmas period as they aim to stay on top of this division.

Second placed Cinderford will be keeping up-to-date with events at Chinnor when they take on Redruth while there is another big game in National Two South this weekend as Redingensians face Bury St Edumunds.

There are certainly some huge games across the National Leagues in the opening weekend of December, but arguably this could be one of the biggest as Chinnor entertain Taunton Titians. The hosts are currently two points clear at the top of National Two South following 11 straight wins and Matt Williams’ side seem in no mood to lose their ruthless streak. This time last year, the Oxfordshire side suffered a blip in form which played a part in them missing out on a place in the top two so Chinnor will be keen to avoid a repeat of that this time around.

Chinnor are back at Kingsey Road and their home record is something which Taunton might be wary of this weekend. The Black and Whites have won their last 24 games on their own patch which is a run that stretches back nearly two years. The task facing the Titians is a daunting one, but they will feel more confident about taking on this challenge following a welcome victory over Redingensians in Round 12. Tony Yapp’s side came into that fixture on the back of two successive defeats which had seen them slip down to third in the table but now, Taunton are six points behind Chinnor and they will be desperate to cut the gap this weekend.

Cinderford will certainly be monitoring proceedings at Chinnor this weekend because they do have the chance to go top with a victory at home to Redruth. Following defeat to the league leaders in Round Six, the second placed side have responded magnificently as they have won their last six matches to keep on the coattails of Matt Williams’ men. Paul Morris’ side battled to victory against Wimbledon last Saturday and they will have to raise their game again when Redruth visit Dockham Road.

The away side have yet another tough fixture to negotiate this weekend after facing Chinnor and fourth placed Redingensians in their last two matches. Both games ended in defeat for Pale Nonu’s side, but last week, they certainly made life difficult for Chinnor and they will be hoping to do the same in Gloucestershire this Saturday. The Reds will also be aiming to double their tally for away wins having picked up just one victory on the road all term thus far.

It is fourth against fifth in National Two South this weekend as Redingensians welcome Bury St Edmunds to Old Bath Road. Both of these sides were promoted into this division back in 2015 and both are certainly establishing themselves at this level. The Rams were on a six game unbeaten run, but that sequence of results came to an end last Saturday as they were beaten by Taunton Titans, so they will be keen to return to winning ways this Saturday.

Redingensians have lost at home on just one occasion this season, but Bury St Edmunds head to Berkshire in high spirits. Ollie Smith’s side have won four of their last five matches which leaves them just one point behind their hosts as we enter December. After a tricky start to the campaign, The Wolfpack are now starting to purr and they have their sights set on the top four.

Canterbury take the trip to London Irish Wild Geese this weekend hoping to secure back to back victories. The City Men held on to beat Henley Hawks in Round 12 which lifted them to sixth place in the division and just three points outside the top four. Andy Pratt’s side now need to translate recent home performances into their displays on the road as the Kent outfit haven’t won on their travels for just under two months.

Speaking of away form, London Irish Wild Geese’s results didn’t get any better last Saturday. A 35-24 loss at Bury St Edmunds was the Geese’s sixth defeat on the road, but it is at Hazelwood where they have shone this term. Lee Starling’s men have won their last three games in Sunbury-On-Thames and that sort of form has lifted them to 11th in the table and 14 points clear of the bottom three. Last time out at home, Wild Geese defeated third placed Taunton so they will have nothing to fear when Canterbury visit in Round 13.

Henley Hawks were a width of a post a way from claiming victory at Canterbury last weekend which would have completed a perfect November for Pete Davies’ men, but they ultimately fell to defeat in Kent. The Hawks currently occupy eighth place in the table and they welcome Clifton to Dry Leas to kick off December.

The visitors also suffered a narrow defeat in Round 12. Clifton were edged out by Worthing Raiders meaning it is now just two wins in seven for Darren Lloyd’s men as we head into the festive period. The Lavender and Blacks are 13th in the division, but given the gap between themselves and the bottom three, they aren’t looking over their shoulders just yet. However, the Gloucestershire side will want to earn their second away victory of the campaign this Saturday just so they stay a comfortable distance from the relegation places.

Worthing Raiders enter the final month of the year in high spirits. The Raiders have won three of their last four matches which has seen them move away from the drop zone and up to ninth in the table. That will certainly have pleased Jody Levett as his side had lost their previous six games and next on the agenda is the visit of Old Redcliffians to Roundstone Lane.

Last Saturday, the Old Reds tasted victory for the first time in this division as victory over fellow strugglers Broadstreet will have given them a boost that they can dig themselves out of trouble. Saul Nelson’s men are 13 points adrift of safety heading into this weekend, but victory over Worthing would certainly improve their chances of moving themselves away from danger.

Two of the promoted sides for this season meet in Kent this weekend as Tonbridge Juddians host Wimbledon. TJs secured the National Three London and South East title last season to move into this division for the first time in the club’s history and Peter Dankert’s men have not done too badly. TJs are 10th in the table and two wins from their last three matches has certainly boosted morale at the Slade after a run of five straight losses.

They host Wimbledon this weekend, whose time in National Two South isn’t going as positively. The Dons currently sit rock bottom of the table and are still without a win as we enter December. The South-West London side have shown, on a few occasions, that they can compete at this level, but they are yet to turn those displays into victories. Wimbledon are already 21 points form safety so they will be desperate for a win on Saturday.

Twelfth place Barnstaple travel to Broadstreet aiming to build on a commanding win against Tonbridge Juddians last weekend. Once again, Barum performed well at home to clinch their fifth victory of the campaign, but Steve Perry’s side will be eager to start gaining results on the road as the Devonshire outfit have won just once on their travels so far this term.

In fact, four of Barnstaple’s last six defeats have come away from Pottington Road and Broadstreet will be itching to add to that stat this weekend. The Midlands side suffered a dent to their survival chances last Saturday following their defeat to Old Redcliffians and now Street are 15 points from safety as we approach the end of the year. Paul Hurst’s men knew it was going to be tough coming into this position and they will now need to start being strong at home if they are to have any chance of avoiding the drop. A win at Ivor Preece Fields this Saturday would be a much needed triumph for Broadstreet.