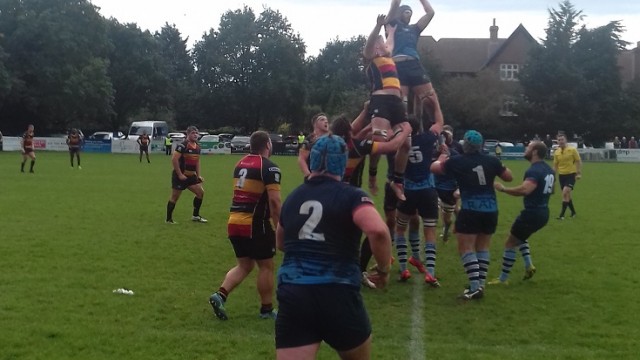 A last-gasp penalty from Cinderford’s James Moffat clinched a narrow victory for the early league leaders over Redingensians, which continued their perfect start to the campaign.

Paul Morris’ men looked to be heading for their first loss of the season, but the full-back held his nerve to keep the Gloucestershire side on top of the pile heading into October.

It was a less stressful afternoon for second placed Taunton Titans as they beat Redruth and the same applied to Chinnor who triumphed over Worthing Raiders.

Elsewhere at the top, Canterbury and Bury St Edmunds continued their excellent recent form while in the bottom half of the table, there were much needed wins for London Irish Wild Geese, Clifton and Henley Hawks.

League leaders Cinderford left it late as James Moffat slotted over a last minute penalty to secure victory in a thriller against Redingensians.

The hosts led 24-22 at the break thanks to scores from Omar Ellaboudy (2), Jordan Souter and Steve Bryant, while Jack Hayes (2) and Reuben Norville went over for the visitors.

After an explosive first period, the second half took a while to spark into life, but both sides did eventually exchange tries as Andrew Berry’s score was swiftly cancelled out by Tom Brockett.

The Rams then looked as though they had scored a decisive try on 70 minutes when Joe Duffelen crossed, but with Cinderford going for their fifth straight win, they hit back through Matt Lane.

Moffat converted the score to take his tally to nine points, but his biggest contribution of the match came in the dying embers of this contest as he kept his cool to slot over a penalty to snatch the win.

Taunton Titans took their winning run to five matches as the Somerset side sealed a comfortable win over Redruth at Hyde Park.

Arun Struminski crossed for his eighth try in this season’s National One and Sam Prior also touched down to help Taunton into a 20-0 half-time lead.

Ratu Vakalutikali and Andrew Hamilton both went over in the second period for Tony Yapp’s side as they earnt a deserved bonus-point.

Chinnor continue to be hot on the heels of the top two thanks to a seven-try victory over Worthing Raiders at Roundstone Lane.

Having been frustrated on the opening day of the season away at Clifton, Matt Williams’ side have been rampant since the beginning of September and they showed no signs of stopping their ruthless streak against Worthing.

A penalty try as well two from Phil Chesters and a score from Kieran Goss gave Chinnor clear daylight between themselves and the Raiders heading into the second-half.

Kemp Price had dotted down for Worthing, but his side were immediately on the back foot after the break as Jamel Harrison and Jonny Bentley both went over.

The Raiders continued to fight as Kiba Richards crossed the whitewash, but Orisi Nawaqaliva and Henry Lamont added the icing on the cake for the Black and Whites.

Canterbury have moved into the top four in National Two South thanks to a fourth straight win over Barnstaple.

Barnstaple opened the scoring with a Jordan Petherbridge penalty early on.

However, Canterbury soon found their rhythm with Harry Sayers, Kieran Thompson and Max Cantwell all crossing with Jarred Hayler replying before the interval.

Will Farris and Sayers ran in further scores straight after the break, but following a yellow card to Cantwell, Barnstaple fought back to earn themselves a try bonus point.

Petherbridge and Hayler both crossed to plant seeds of doubt in the City Men’s mind but the home side sealed the win when Farris crossed for his second.

But, there was still time for Barum to gain something from their trip to Kent as Danny Southworth barged his way over late on.

Bury St Edmunds made it four consecutive victories as they beat Wimbledon in Round Five.

Wimbledon have not won a match at this level since promotion in May, but four tries from Dwayne Corcoran in a seven-try rout lifted Ollie Smith’s men to fifth in the table.

Second half tries from Kareem Swandells and Josh Christie were not enough for Wimbledon, even though they once again showed their qualities.

Bury’s other scores came from Liam McBride, Chris Lord and Will Affleck as the Wolfpack continued their excellent recent form.

London Irish Wild Geese claimed their first win of the season with a bonus-point victory against Tonbridge Juddians.

The visitors led 20-10 at the break thanks to two scores, while Charlie Edwards crossed for the hosts.

Edwards was at it again after the break and a penalty from Nathan Holmes brought the game level, but Irish had other ideas.

They did well to restrict TJs to just two penalties while they crossed on two more occasions to complete a deserved win.

Jack Watters opened the scoring for the hosts before Roberts and OR’s Henry Bird traded tries before the break.

Clifton then took full control of this local derby as Clark powered over for his brace, either side of Roberts’ second.

Tom Hargen dotted down for Old Redcliffians, but a penalty try to Clifton sealed the win on 77 minutes, despite Scott Parsons crossing late on for a consolation score.

Henley Hawks clinched their first win since the opening day of the season, beating Broadstreet on their first ever visit to Dry Leas.

Hawks led 16-3 at half-time with Tom Emery going over twice for the hosts while George Jackson slotted over two penalties.

After the break, Dave Hyde, Jack Albion and Joe Butler added to Henley’s advantage as did Jackson, who landed a further two penalties.

Tries from Ryan O’Neil and Andrew Murray were, in the end, little consolation for the Midlands visitors, who are still searching for their first win of the season.