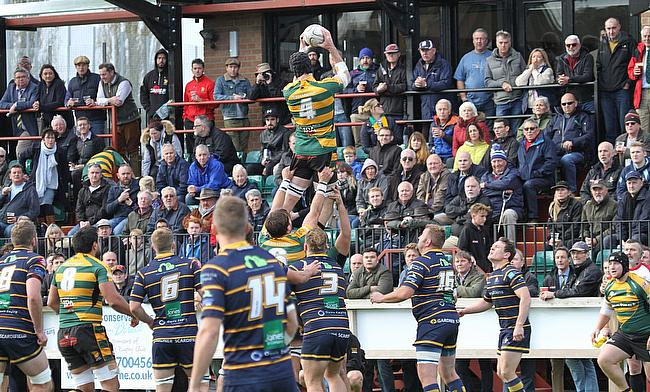 In Round Three of National Two South, there were some outstanding performances across the board as 66 tries were scored over the course of the weekend.

In total, 492 points were scored with the likes of Rams RFC, Bury St Edmunds and Worthing Raiders on the right end of some thumping results.

Taunton Titans, Canterbury and Tonbridge Juddians all produced commanding displays while Old Albanian came from behind to beat Barnes and Dings Crusaders triumphed against Birmingham and Solihull in the tightest game of the weekend

Rams RFC extended their 100 per cent start to the season with a bonus-point victory over local rivals Henley Hawks.

Alex Seers grabbed the first try of the afternoon, but a quick response from Thomas Emery gave Henley an 8-5 advantage following an early penalty from Joe Butler.

However, tries from Miles Lloyd and Tom Vooght gave the hosts a nine-point lead at the break.

Colin Thomson crossed for the Rams after the restart, and although Sam Lunnon responded for the Hawks, the final word went to the home side as Robbie Stapley, James Baker and Joe Duffelen all crossed.

Taunton Titans earned their second home win on the spin with a clinical victory over Clifton on Friday night.

Isaac Dalton grabbed Taunton’s first try, while Toby East was accurate from the tee as the hosts led 15-0 at the break.

Ollie Rice, Jarrad Hayler and Sam Brown also touched down for the Titans to wrap up the win with Clifton only managing two unconverted scores.

Bury St Edmunds cruised to victory against Guernsey to record their second win of the campaign.

Four tries from the outstanding Jaid Wiltshire and braces from Ben Leng, Finlay Sharp and Cameron Ritchie helped Bury thrash the newly promoted side in Suffolk.

And last week’s National Two South player of the week Will Scholes and Franco Catuogno added further tries for the hosts with Thomas Ceillam (2), Lewis Hillier and Nicholas Merrien going over for Guernsey to seal a try-bonus point.

Worthing Raiders moved up to fourth place in the early National Two South standings after a thumping 10-try win over Redruth, who came into this fixture unbeaten.

Matt McLean, Curtis Barnes and Jack Maslen all notched two tries for the Raiders who actually found themselves level in this contest at half-time.

The Reds were very much in this game at the break as tries from Jake Clemson and Eliot Salt made it 14-14, but a penalty try was all the away side could muster up in the second period.

Old Albanian recovered from a half-time deficit to return to winning ways in National Two South after victory away at Barnes.

The hosts were ahead at the break following tries from Johan Van Der Poel, George Hunter and William Symonds while OAs responded through George Bartlett and Alexander Chalcraft.

However, a score from Peter Warne and Thomas Bednall’s drop-goal gave the away side a lead they would not relinquish.

Joshua Davies did cut OAs’ advantage with a try just after the hour, but another three points from Bednall and Morgan Thompson’s effort rounded off the win for Gavin Hogg’s men.

Old Redcliffians are still searching for their first win of the season after an impressive performance by Canterbury at Scotland Lane.

Canterbury went in at half-time 22-7 ahead after tries from Dan Smart, Harvey Young and Tristan King.

Away victories are savoured in a tough league but @cantrugby were always in control of this match and underlined their superiority with a bonus point win which lifts them to sixth place in the early season table. https://t.co/efMbZNMxCj #Canterbury pic.twitter.com/2XQaH6rb3u

Ezra Caven scored Old Reds’ opening try in the first half, but the Bristol side fell further behind after the interval following scores from Charlie Grimes and Oli Best.

Lock Chris Pursall got a try back for the hosts, but it was immediately cancelled out by Sam Goatley as the City Men sealed the win.

Old Reds did end proceedings with a third score via Henry Bird, but it was merely a consolation.

Mike O’Sullivan, Duncan Tout, Will Robinson and Finlay Coxon-Smith crossed for the hosts inside 25 minutes.

And a second for Coxon-Smith gave them a 31-0 interval lead before Hugo Watson and O’Sullivan added further tries to seal a convincing win.

Sam Gratton, George Owen and Joseph Henry went over for the Wild Geese, but this was another tough afternoon for the men from Hazelwood.

Two tries proved just enough for Dings Crusaders as they edged past Birmingham and Solihull at Shaftesbury Park.

The West Country hosts led 7-0 at the break as last week’s star man, Ben Bolster, converted his own score.

Replacement Adam Nunney went over to set up a tense but scoreless finish as the Crusaders held firm for victory.