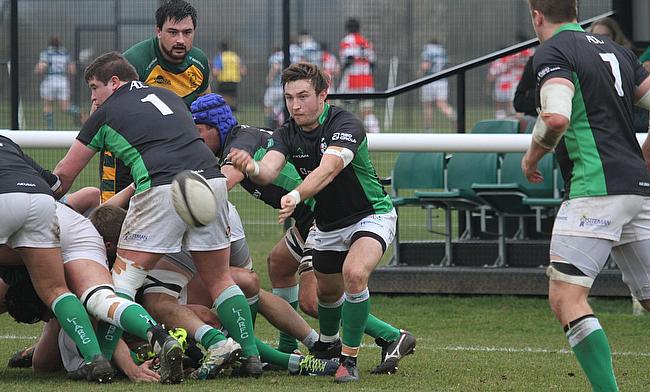 Wild Geese will travel to Scotland Lane this weekend hoping to build upon their superb victory over Tonbridge Juddians. The men from Hazelwood began 2019 with a win and they are now 10 points off safety as things stand.

Sitting one place above the relegation zone is Old Reds. Three victories from their last four matches has put the Bristol-based side in control of their own destiny and if they were to get the better of the Wild Geese in Round 18, it could be hugely significant.

Fellow rivals Birmingham & Solihull and Guernsey are on their travels this weekend as they face tricky trips to Taunton Titans and Redruth, respectively.

The aforementioned Taunton are firmly in the promotion hunt in National Two South and they sit just two points behind second-placed Canterbury who travel to Dings Crusaders on Saturday while another candidate for the top two, Henley Hawks, face Tonbridge Juddians.

Leading the way, though, are Rams RFC. The league leaders are 13 points clear at the summit and they will be aiming to take another step towards the title when they face Old Albanian this weekend.

The Rams are starting to pull clear. Seb Reynolds’ side have been in the driving seat in National Two South for the majority of this season and they extended the gap between themselves and the chasing pack in Round 17 as they battled to a victory over Henley Hawks. Two late tries from Jak Rossiter saw Rams RFC clinch a 13th successive win and they are 13 points clear at the summit as we head into Round 18.

BIG thank you to @BBCSouthNews for coming out on a cold January night to film the team as they prepare for their big game against Old Albanian. Featured at 18 mins – https://t.co/wkv3PFjJc4https://t.co/fULMjLoEan

The last time the league leaders suffered a defeat was towards the end of September, but this weekend, they come up against the only team in the league that has managed to beat them this term. Old Albanian travel to Old Bath Road aiming to halt the table toppers once again and a victory for Gavin Hogg’s side would certainly boost morale. OAs have lost their last three matches and their poor run has pretty much ended their hopes of challenging for an immediate return to National One. They beat the Rams 18-10 in the reverse fixture so could history repeat itself on Saturday?

With Rams RFC seemingly cruising at the summit of National Two South, the race for second place is only intensifying. Canterbury returned to the top two last weekend after they brushed aside Old Redcliffians while rivals Henley Hawks were beaten by the aforementioned Rams. The City Man are just one point clear of their fellow promotion rivals and they go to Dings Crusaders in Round 18 looking to stay in control of their own fate.

Canterbury have actually won eight of their last nine games, while Dings come into this fixture on the back off four straight losses. A defeat to Birmingham and Solihull to begin 2019 saw the Crusaders’ baron spell continue as they now sit 12th in the table. Their excellent form earlier in the season means Luke Arscott’s side still have a comfortable cushion between themselves and the relegation battle, but a victory at Shaftesbury Park on Saturday would be a welcome boost.

Henley Hawks were five minutes away from defeating league leaders Rams RFC. A victory for Nigel Dudding’s men in Round 17 would have changed the complex of the promotion race ever so slightly, but their heart-breaking loss saw the Rams increase their lead at the summit and the men from Dry Leas slip out of the play-off spot.

The Hawks are only one point behind Canterbury in the battle for second place and Tonbridge Juddians lost ground in their personal bid for a top two spot last week. After an unbeaten run of eight games, Peter Dankert’s side were stunned by London Irish Wild Geese and now TJs are nine points behind Canterbury. However, if they were to claim a win against Henley, it could reignite their promotion hopes and considering they haven’t lost at home since October, TJs may fancy their chances of bouncing straight back this weekend.

Last Saturday, Taunton Titans maintained their excellent form as they came out on top against Clifton to extend their winning streak to five matches. Tony Yapp’s side have been mightily impressive this winter and while their fellow promotion rivals have all dropped a handful of points over the Christmas period, the Titans have kept their cool.

The Somerset outfit are now only two points behind Canterbury and they will be favourites to continue their recent run when they host Birmingham and Solihull in Round 18. The Bees currently sit in the bottom three, but they will arrive at the Commsplus Stadium in high spirits after beginning the New Year with a victory against Dings Crusaders. Pete Glackin’s men are 11 points from safety and if they were to get the better of promotion chasing Taunton this weekend, it could really kickstart a revival.

What a difference seven games makes. That is not quite the phrase, but Bury St Edmunds won’t care. Since head coach Nick Wakely has come into the club, the Wolfpack’s fortunes have turned around dramatically. They have picked up 24 points since the middle of November and after sitting just above the drop zone, Bury are now seventh in the table following three successive wins.

After beating Guernsey on their travels last weekend, Bury are once again away from home in Round 18 when they visit Barnes. Following a run of five straight defeats, the London-based side kicked off the New Year with an excellent victory over Old Albanian. Barnes showed a steely determination to secure their seventh win of the campaign and they will be hoping to upset the odds again when they entertain Bury on Saturday.

Belief seems to be building around Worthing Raiders. Jody Levett’s side continued their brilliant form by securing a third consecutive win in Round 17 as they beat Redruth. Curtis Barnes was the star of the show has he bagged a hat-trick for the Raiders and the result kept Worthing in the top half of the table.

In fact, the men from Roundstone Lane are only two points off the top six and they will be keen to maintain their momentum when they take on Clifton this weekend. Matt Salter’s side come into this fixture having picked up two bonus-points against Taunton Titans and the Bristol side are certainly looking at the positives from that defeat last time out. As things stand, Clifton sit in 12th place but with a handful of returning players to choose from, the Gloucestershire outfit may be quietly confident of halting Worthing’s form.

The main news in National Two South this week came from Redruth. After a run of five straight defeats, the club named Nigel Hambly as their Director of Rugby for the rest of this campaign and he will be assisted by Pale Nonu and Gareth Tedstone as the Reds look to turn their fortunes around.

As things stand, the men from the Rec are 10th in the table after just one win from their last 10 games, but they may see their upcoming fixture with Guernsey has the perfect opportunity to stop the rot. The visitors come into this clash in Cornwall having lost 11 matches in a row and Jordan Reynolds’ side currently prop up the division. The Raiders are 11 points from safety so it is not doom and gloom just yet and while Redruth may want to exploit Guernsey’s poor form, the Channel Island side will also be aiming to do the same thing to their hosts in Round 18.

“Massive”. That’s how Old Redcliffians winger Henry Bird has described this weekend’s clash with London Irish Wild Geese. Both sides sit towards the wrong end of the table, but it is Old Reds who are in a much rosier position as things stand. Despite their loss to Canterbury in Round 17, Saul Nelson’s men are 11 points clear of the drop mainly thanks to a three-match winning run in December.

We are set for a crucial Saturday in the National Two South relegation fight.@OldRedsRFC Henry Bird thinks it could be 'massive' as his side take on rivals London Irish Wild Geese #Nat2shttps://t.co/vUap2pkfc6

Bird also told ncarugby.com this week that his side want to make Scotland Lane a fortress in the second half of the campaign and Old Reds can begin achieving that aim against the Wild Geese. The men from Hazelwood made the ideal start to 2019 as they stunned Tonbridge Juddians to claim a vital home win. As things stand, they sit 10 points behind Olds Reds so a win for the Wild Geese in Bristol would not only enhance their hopes of avoiding relegation, but the battle for survival would be blown wide open once again.