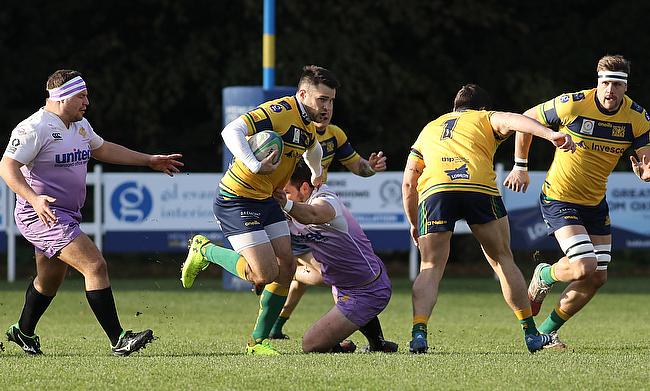 Henley Hawks recorded their sixth win on the bounce as they brushed aside Clifton to move into the top two of National Two South.

Nigel Dudding’s side leapfrogged Taunton Titans, who were stunned by Barnes, and it means the Hawks are now seven points behind leaders Rams RFC.

The table toppers also made it six victories in a row as they saw off Dings Crusaders while fourth placed Canterbury left it late to beat Guernsey, as did Tonbridge Juddians against Old Redcliffians.

Down at the bottom, Birmingham and Solihull are no longer at the foot of the division after claiming a vital win over rivals London Irish Wild Geese while elsewhere, Old Albanian defeated Redruth and Worthing Raiders clinched an away victory over Bury St Edmunds.

Rams RFC ended the first-third of the National Two South campaign with a home win over Dings Crusaders, which leaves them seven points clear at the summit.

Tries from Jamie Guttridge and Ben Henderson, as well as score by Oliver Taylor, put the league leaders 17-10 ahead after 35 minutes.

Dings had led this contest midway through the first period following Jordan Grattan’s try and a penalty from Ben Bolster, but the visitors found themselves 14-points down at the interval after Conor Corrigan’s effort.

Bristol Bears loanee Will Capon cut Rams RFC’s lead after the break, but Andrew Humberstone’s late try wrapped up a sixth win in a row for the hosts.

Henley Hawks have moved into the top two after a bonus-point win over Clifton at Dry Leas.

Tries from Marcus Lowe, Liam O’Neil (2) and Thomas Emery secured the bonus point in the first half for the Hawks. Second-half scores followed for Sam Lunnon (2) and Wood as Henley sealed their sixth win on the bounce.

Clifton could only manage consolation tries from Bentley Halpin and Lloyd.

Taunton Titans fell out of the promotion places as Barnes secured their fourth win in a row in National Two South.

Tries from Alex Hind, Tom O’Toole and Josh Hammett put the hosts in control as they led 25-0 at half-time.

Jamie Collins and Robbie Martey crossed for the home side in the second-half, but Taunton scored four tries following earlier efforts from Chris Francis and Noah Sixton.

Jarrard Hayler (2), Daniel Lee and Sixton all went over to cut Barnes’ lead to 10 points with a couple of minutes remaining, but O’Toole sealed the deal for his side with a late try.

Canterbury snatched a narrow win over Guernsey thanks to Sean Stapleton’s converted try at Footes Lane.

The City Men had led for a 10-minute spell during the game after three points from the boot of Oli Best and a JJ Murray try, but two penalties from Harry Greenhalgh to add to Robin Le Cocq’s earlier score gave Guernsey a 13-8 lead.

However, on 77 minutes, Stapleton rumbled over from close range to give Andy Pratt’s side a third straight win which leaves them just two points off second spot.

Old Redcliffians saw their second victory of the season snatched away from them as Tonbridge Juddians clinched a last-gasp win.

Fly-half Will Robinson was excellent from the tee all afternoon and he kicked four first-half penalties to give the hosts a 12-7 lead at the break, with James Clements going over for Old Reds.

Clements completed his hat-trick in the second-half and Ed Boxall also crossed as Old Reds closed in on victory, but after earlier scores from Thomas Nicoll and Finlay Coxon-Smith, Robinson’s late penalty gave TJs a slender win.

Centre Dan Watt helped Old Albanian secure their second win on the bounce as they defeated Redruth at Woollams.

Watt kickstarted proceedings for OAs as his penalty and a converted try put the hosts in control before Peter Warne’s effort put them 15-0 in front at the break.

Further scores from Tom Bednall and Tom Holdsworth completed the victory for Gavin Hogg’s side while Tom Nortman grabbed Redruth’s only try in a second-half which saw the visitors receive three yellow-cards.

Worthing Raiders picked up their second away win of the season as a blistering start helped them overcome Bury St Edmunds.

Henry Birch’s try saw Worthing go into the interval 26-12 ahead, mainly thanks to three scores in the opening 12 minutes from Thomas Adams, Thomas Miller and Alex Basson.

Mark Kohler got Bury off to the perfect start in the second period as he dotted down to add to first half tries from Yasin Browne and Cameron Ritchie, but Worthing were able to wrap up the win.

A brace from Jon Dawe put them 19 points ahead while Jordan Coombes came off the bench to claim a consolation try for Bury, who have now lost their last three matches.

Birmingham and Solihull clinched a crucial victory in dramatic fashion against London Irish Wild Geese to move to within four points of safety.

Bees take the spoils in entertaining bottom of the table clashhttps://t.co/Qt5BmgLKYY

Tries from Jack Jolly and Corey Venus put the Bees 12-0 ahead, but the Wild Geese battled back as scores via Bradley Meeson and Oliver Turner had the teams locked together at 12-12.

However, with the clock edging towards full-time, debutant scrum-half Michael Hagan went over to snatch the win for the Midlands club, who are now off the bottom of National Two South while the Wild Geese currently prop up the division.