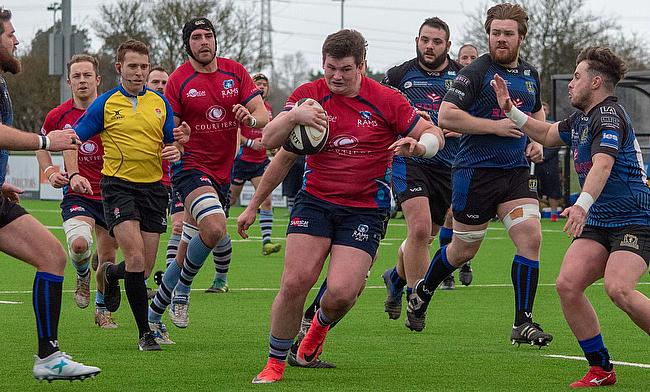 Ben Henderson has admitted Rams RFC are surprised by their remarkable start to the National One season as they prepare for a top of the table clash with Richmond. (Photo Credit: Tim Pitfield)

Back in April, the Rams were promoted to National One for the first time in the club’s history and followers of the third tier may have predicted the Berkshire outfit to struggle this term.

However, Seb Reynolds’ side have defied the early season predictions and England rugby’s Team of the Month for September head into this weekend with four successive victories to their name.

Wins over Cambridge, Birmingham Moseley, Darlington Mowden Park and Chinnor means the Rams begin October having triumphed in all of their fixtures thus far in their debut National One campaign.

See all the stats as we name September's grassroots teams of the month from levels three to 12 ➡️ https://t.co/28bmVDC0zS pic.twitter.com/dGDjyueccA

The Rams hooker said: “I don’t think five weeks in, we thought we’d be involved in an early top of the table clash – that wasn’t quite on the cards!

“We are trying not to be in awe of teams who have outstanding players who have played at Championship or Premiership level which is quite hard at times, but we are up for the fight each week.

“I don’t think anyone saw it coming, needless to say ourselves. It is a surprise to be where we are at this point.

“We may have aimed to pick up a couple of points, but to pick up all four is a godsend and the realist in all of us is saying that it is 18 points towards a relegation fight,  15 of which we probably didn’t think we’d have.”

Rams earnt promotion to this level after four years of progression in National Two South. In their first campaign in the fourth their, the club won eight of their last 11 games to avoid an immediate relegation but since then the Berkshire side have not taken a step backwards.

Henderson, who has been with Rams for over five seasons now, believes the experience they had in National Two South has helped them in National One.

He added: We had a strong team coming into the year and we don’t sort of splash cash at the club. We just have a very well-run set-up. Four of us, myself included in that, have been at the club since the National Three days and our foundations are built on local talent and that family ethos at the club.

“The club has been on a journey over the last five seasons during my time here. We got ourselves promoted into Nat 2 and we were a very strong team and we did think we could ‘walk the league,’ but it was a rude awakening and we did find ourselves in a dogfight at the bottom. It was a real eye-opener.

“We have kind of gone from strength to strength from there in a very holistic way. I think we took our learnings from that and knew that it was going to be a very tough set up this time around.

“Pre-season and all the plans that went around it were all geared towards that faster pace game and we have tried to condition ourselves for that. You really have to give it your all early on in the season and then you start to feel the pace and rhythm.

ICYMI: @Rams_RFC are now four wins from four after a stunning last-gasp win against @ChinnorRugby – https://t.co/dl0EH3SIpl

“In the last few games, we have started to realise we can survive at this level and can hang with these teams. No-one, including ourselves, had aspirations of being four out of four wins. It has not been pretty and it has not been easy to come by, but we will absolutely to take it!”

Current head coach Seb Reynolds was the backs coach when Rams were promoted to National Two and the club has gone from strength to strength since then.

Now, Rams are rubbing shoulders with the likes of Birmingham Moseley, Plymouth Albion and Darlington Mowden Park but facing Richmond this weekend is probably a measure of how far the club has come.

Three years ago, Rams finished eighth in National Two South while Richmond gained promotion to the Championship, but on Saturday, the teams will meet in the same league.

Both clubs have four wins and 18 points to their name after the opening month of the season and whilst Henderson is relishing the challenge of facing a team like Richmond, he is realistic about the bigger picture for both sides this term.

“I have been playing since I was five and Richmond has always been such permanent franchise of English rugby,” Henderson told ncarugby.com.

“To be honest, when I joined Rams we wouldn’t look at the idea or the prospect of ever playing a team like Richmond. There is huge separation between the histories of the clubs and also in terms of our aspirations this year. We have been very lucky with the start we have had and how we fought for those wins, but they are looking for promotion and we are looking to survive.

“Their goals are very different to ours and they are in a much different place in their progression. We are very candid about this being a dogfight of a season.

“As a team, we know the fight to stay in a league. I know we have had a great start, but I think we would settle for one place above relegation to be honest. To say top 10 or anything like that may be ridiculous because no-one said we would do that at the start! Like the first four games, we will take absolutely every point we can and we will scrap for everything.”