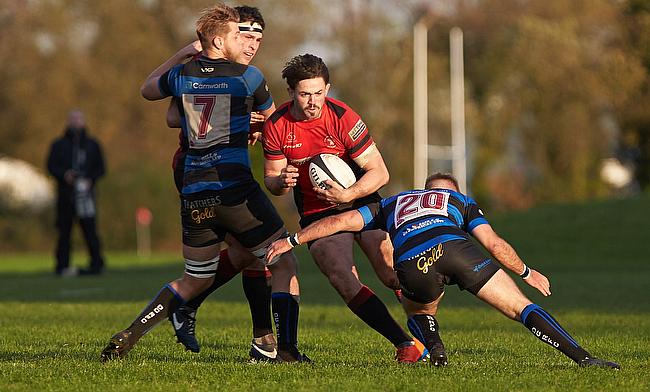 Ben Russell is hopeful Bournemouth can dig themselves out of trouble in National Two South as the Lions prepare for a crucial clash with Westcliff this weekend. (Photo Credit: Simon Carlton Photography)

Richard Sharp’s men currently prop up the division and the south coast outfit are 14 points adrift of safety, with a game in hand, as we approach the final third of the campaign.

With Saturday’s opponents Westcliff sitting one place above the regelation zone, Russell is keen for his side to build on recent positive performances when they travel to The Gables.

Bournemouth have picked up nine points from their last seven fixtures, including a losing bonus-point against top of the table Henley Hawks.

“There is no denying we are in a relegation battle now,” Russell said.

“We have been working so hard as a team to cement a strong attack and defensive structure. Now when we play against these top teams, we are putting in some great performances and we are losing by minimal points, but it gives us a fight to carry on going to get ourselves out of this hole we are in at the moment.

“We just have to focus on the positives in every game to make sure we are ironing out those few creases as we look for that big performance, especially heading into this weekend with Westcliff.”

Last season, Russell left his boyhood club, New Milton, to move to Chapel Gate and the flanker’s maiden campaign with Bournemouth couldn’t have gone much better.

The club romped to the South-West Premier title following 25 wins from 26 games and they won the division by an unprecedented 27-point margin as they ended their five-year absence from National Two South.

“It was a bit daunting at first when I joined the club because I had been at New Milton since I was a child,” said Russell, speaking to ncarugby.com. “However, the lads have been absolutely outstanding and it is like a new family I have joined.

“To have such an outstanding season last year, it was great to be part of that. It has really built me as a player. I feel like I have improved tenfold after joining last season.

“For the team, it has been a big step up from South-West Premier. We had a tough start as we were trying to find our feet and adapt to the faster-paced games. Last season, luckily for us, the bounce of the ball went our way, but this year has been the polar opposite. We were finding all the bad luck at the start of the season and we need to start swinging it our way now.”

At the beginning of this term, the club were under the stewardship of Will Croker. The Director of Rugby had guided Bournemouth back into the fourth-tier after stabilising the team following their relegation in 2014.

Will Croker leaves Bournemouth as head coach and director of rugby with immediate effect https://t.co/ir3o40izdk pic.twitter.com/dlsc1aYzZb

However, Croker suddenly parted ways with the club back in October after four straight defeats, with interim Performance Director Richard Sharp taking over the reins alongside Jon Sanchez.

Despite the surprising loss of Croker so early in the season, Russell admits the players have just had to remain concentrated on their own tasks.

He added: “The team made sure we were focused on each other to make sure we didn’t let it affect us. We move forward as a squad. Richard Sharp has made sure we always stay focused on the challenges ahead because that is what we need to worry about as players.

Croker left Bournemouth ahead of their last clash with Westcliff and the Lions now face the same opposition in a critical fixture in Round 20.

Westcliff head into this contest 10 points clear of the drop as back-to-backs wins over Sutton & Epsom and Old Redcliffians has seen them create some breathing space.

The Lions did beat Westcliff 39-12 just over three months ago and a repeat of that result could spark a Bournemouth revival.

“At the start of the month, we knew we had to target big games including this massive one against Westcliff,” Russell said.

“We are both in this relegation battle so we know if we can get this big five-point win at the weekend, it brings us back into the game and hopefully, it will put us in good stead to get out of the relegation zone by the end of the season.

“All the boys are really up for it. In training, everyone has been so focused and it is now down to us to bring home the win for the team and the supporters as well.”